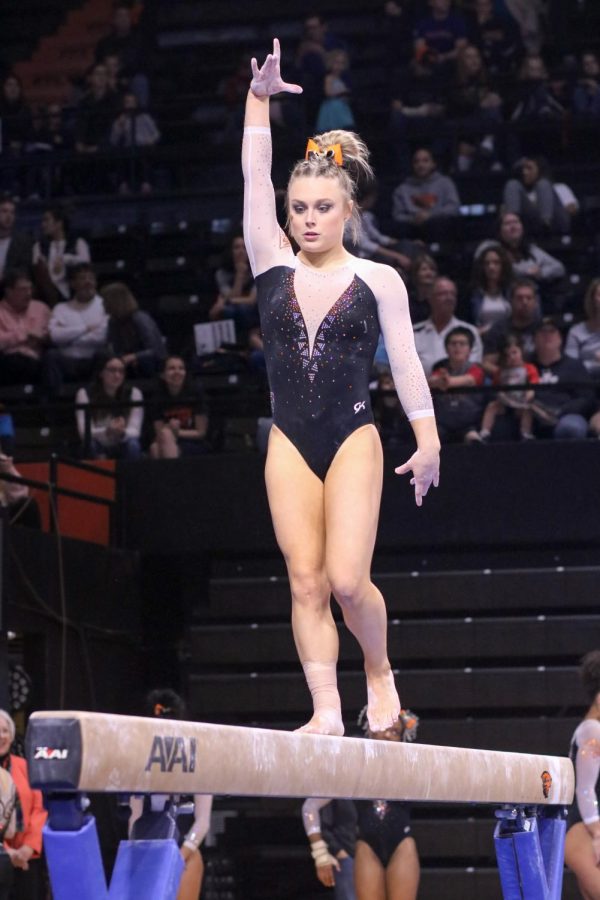 An OSU gymnast competes on the balance beam in Gill Coliseum.

With the fall term coming to an end, and football having their last home game Nov. 16, winter sports are moving out of preseason and into the spotlight.

Here are the prospects for this year’s Oregon State Gymnastics, Men and Women’s Basketball, and Wrestling teams.

This year’s season for the OSU Gymnastic team began Friday, Nov. 22 at their Orange and Black exhibition. Although not counting towards their overall stats for the season, head coach Tanya Caplin said the meet is “a great opportunity for [the team] to come in and do a few of our routines and figure out what we need to [work on] over the next month.”

The team’s official season kicks off on Jan. 3 at the Critique Classic where they will compete  against Georgia and Iowa in Orlando, Fla. OSU had a win against Iowa in last year’s season, ending with a score of 196.550 over 195.425, helping their overall outcome of the season to be six wins to three losses.

“We have a greater belief in ourselves after what we achieved last year, so because of that everyone [comes to practice] driven and ready to go,” said Halli Driscoe, senior and competitor in the uneven bars and balance beam section of the meets. “I’m most excited for LSU to come to us…because we competed really well and impressed their crowd which doesn’t normally happen. So, we’re excited for them to come to us and show them what our homeground is like.”

The team will face off against LSU on Feb. 8 in Gill Coliseum, and will later face Stanford, UCLA, Washington, and Illinois as home meets.

Having multiple wrestlers on the preseason rankings and ending last year’s season holding two spots at the NCAA championships, this year’s lineup is young yet balanced according to Jack Dodd, the team’s communication assistant.

The roster is well versed with returning NCAA qualifiers Devan Turner, Hunter Willits and Grant Willits, and over ten freshman stepping on the mat for the first time this year.

The Beavers have started the season with one win under their belt after their meet against Simon Fraser University, only giving away 8 points to SFU and ending the meet with an overall score of 40-8. The team will face off at the Mike Clock Open in Forest Grove, Ore. on Saturday Nov. 17, the same open that they secured eight first-place finishes and four second-place finishes last year.

“The biggest competitors in the PAC-12 are shaping up to be Arizona State who is currently No. 8 in the country and return NCAA All-Americans to their roster,” Dodd said in an email statement. “Stanford is also a threat as they won the PAC-12 last year but Oregon State finished close behind in third.”

Both of these away meets will take place in the new year, going against Arizona State on Jan. 17, and Stanford on Feb. 9.

After the exhibition match against the Women’s USA Olympic team, the Beavers won their first official games of the season against UC Irvine and Pacific as part of the Women’s National Invitational Tournament and are off to an optimistic star.

Scott Barnes, the Vice President and Director of OSU Athletics, says there is a lot to be shown about the dynamics by looking at the new impact players at forward and center.

At week three, the Beavers sit at seventh place out of the top 25 universities across the country with an overall record of 4-0 and 573 points. PAC-12 also recognized two players for their accomplishments in the season this far. Mikela Pivec, was titled the PAC-12 player of the week, and Taylor Jones was given the ‘freshman of the week’ title, after she scored 20 points and 10 rebounds for the team’s game against UC Irvine.

The Men’s Basketball team currently holds a  3-1 record afterfalling short a mere eight points to Oklahoma on Nov. 12 in the Moda Center as part of the Phil Knight Invitational.

“We have a significant amount of returning scoring and rebounding to go with some dynamic newcomers [and] in addition, some returning players have made significant strides since last season,” said Barnes. “All three phases [of this year’s season] are [going to be] exciting as we build for the ultimate opportunity to win championships and compete in the postseason NCAA Tournament.”

The Beavers are 9th place out of the PAC-12 standings so far in the season, but still have a remaining 25 games before the first round of the PAC-12 championship begins.