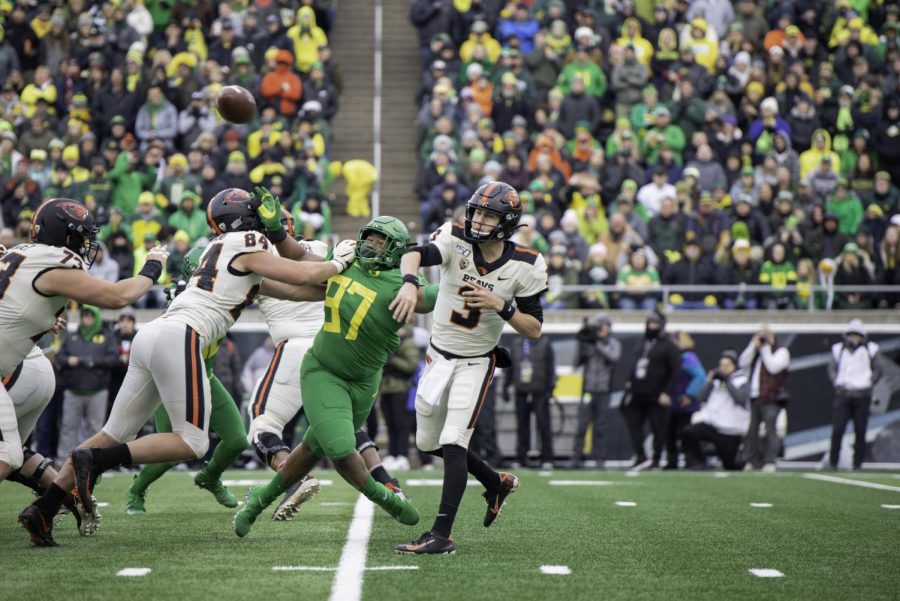 The Oregon State Beavers fought to maintain a close game with Oregon in their final game of the season, but eventually fell to their rival Ducks 24-10 in the 123rd Civil War.

The rivalry between the Oregon schools holds history for both teams, as well as the PAC-12 conference. With their Nov. 30 meeting marking the 123rd time the two football programs faced off against each other, the Civil War is the most played series between any two rivals in the conference.

Oregon State’s head coach Jonathan Smith has taken part in the Beavers’ rivalry with the Ducks as both a player and a coach. In a press conference on Nov. 25, Smith talked about the intensity of the rivalry between the two schools, emphasizing the proximity between the colleges as a big factor.

“This is why this rivalry is so unique. The closeness between the two universities,” Smith said. “I’ve been part of other rivalries where it’s across the state, it’s not as intimate.”

When the first game between the Beavers and the Oregon Ducks took place in 1894, Oregon State walked away with a 12-0 win. However, the matchup has swung in the favor of Oregon in the past decade.

Since that 2016 win, Oregon has had the upper hand against the Beavers. The year following their Civil War victory, Oregon State lost on the road to the Ducks 69-10 in 2017, giving the most one-sided final score in the series’ history. Oregon State then suffered a 40 point loss to the Ducks at home by a final score of 55-15 in 2018.

The loss will look the same for Oregon State’s overall record as it has the past two seasons. But unlike recent history, the Beavers forced the Civil War into a close and competitive game that came down to the final minutes.

Of the Beavers’ 12 games played this season, seven of them were decided by two touchdowns or less, with five of those games being decided by no fewer than four points. Oregon State’s competitive nature failed to result in a winning season this year, but forcing close games showed improvement compared to last season.

Under Smith’s first year as head coach in 2018, Oregon State struggled to keep their games close. Only two of the Beavers games were decided by 14 points or fewer last season, compared to the seven games decided by that margin this year.

Oregon State also finished 2018 with an average of a 23.5 point difference between themselves and the winning team, the third lowest mark in FBS. In their 12 games this year, the team improved this spread to an average of 4.0 points per game.

The Beavers’ competitive season boosted their overall record to five wins, their most since the 2014 season. Going 5-7 one year after a 2-10 season was something n Smith commented on after this year’s game against the Ducks.

“I do think we’re getting better. And I do think we’ve got some real momentum,” Smith said. “We feel good [in] our approach from year one to year two. We made some steps and we need to make more steps in year three.”

The Oregon State defense had a strong performance against the Ducks in a game that came down to the final two minutes, holding them to 17 points through most of the game before an Oregon touchdown with 1:15 left in the fourth quarter.

The Oregon offense struggled to get going against the Beavers defense. The Ducks were held under 27 points for the third time this season, in part due to Oregon State holding Oregon to seven straight possessions without any points.

Oregon State opened the game with a drive ending in a field goal and went on an 87 yard drive early in the fourth quarter that ended in a touchdown, but was unable to find much success beyond that.

Junior wide receiver Isaiah Hodgins was frustrated with the loss, but proud of how hard the team fought and talked about how they kept competitive with Oregon after the game.

“I’m super proud of this team. Just shows the resilience and the hard work and toughness of this team,” Hodgins said. “Offense in a slump, and then get up and get together a good drive, and defense just kept getting stops. If anyone would have thought that would have happened last year, [they wouldn’t even have been close.”

Hodgins and the Beavers offense did not make much noise against a tough Oregon defense, partly due to a change in the starting lineup. Senior quarterback Jake Luton sustained an injury to his forearm in Oregon State’s Nov. 23 game against the Washington State Cougars, and was unable to play in his final game in the orange and black. Luton started at quarterback for the Beavers first 11 games this season and has been with the team since 2017.

With Luton out, redshirt sophomore Tristan Gebbia got the start at quarterback against the Ducks, giving the transfer from Nebraska the opportunity to show glimpses of his potential. Gebbia took snaps in three games this year for Oregon State before getting the first start of his college career in the Civil War.

Despite the low point production on offense, Gebbia ended the game completing 65% of his passes for 243 yards while adding another 25 on the ground.

Luton talked about Gebbia’s performance after the game, as well as giving his thoughts on Gebbia’s potential with the team going forward.

“I’m proud of him, I think he did a great job,” Luton said. “He’s got a lot of success ahead of him. He’s a really hard working kid and I wish him the best.”

Despite losing a few impact starters on the offense, offensive line and defense to graduation, the Oregon State roster will be full of players on both sides of the ball with at least one year left of eligibility.

Beavers’ leading receiver and Biletnikoff award semi finalist in Hodgins will be entering his senior season next year if he waits to declare for the NFL draft. Should he choose to return for his senior season, Hodgins will join sophomore running back Jermar Jefferson and sophomore wide receivers Champ Flemings and Tyjon Lindsey as returning offensive players who will be looking to build on the five win season from 2019’s team.

Gebbia spoke with confidence about the returning players as well as the newcomers when asked about the roster on next year’s team.

“I got the utmost confidence in the guys that are coming back, I really do,” Gebbia said. “We got some guys coming in in the offseason that are gonna be great. But we got playmakers all over the place.”

Those return “playmakers” on offense and defense will have a chance to build on what was Oregon State’s best season in five years. The Beavers’ 5-7 season may not have been enough to take the team to a bowl game, but it was a step in the direction they are trying to take the program.

Despite falling short in the Civil War, Oregon State was close to getting the upper hand on the Ducks for the first time since 2016. The 24-10 loss to Oregon spoke to how the whole season has gone for Oregon State. Not quite where they want to be, but showing improvement from where they have been the past couple of years. It will be up to Smith and the 2020 Oregon State Beavers to continue getting better, and to take the next steps in becoming a team that is ready to compete in the PAC-12.