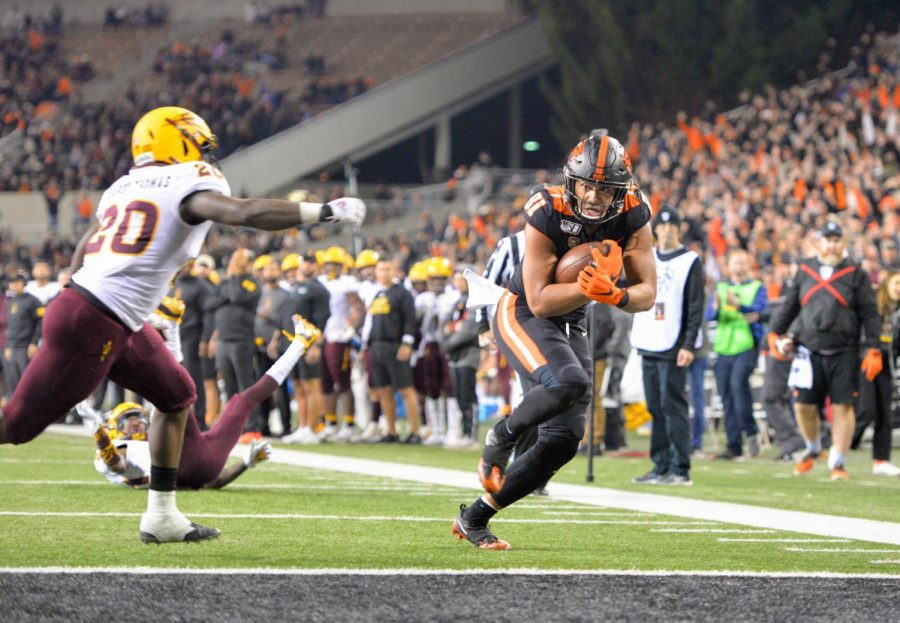 Redshirt senior tight end Noah Togiai evades a defender to reach the endzone in their matchup versus Arizona State on Nov. 16 for senior night in Reser Stadium.

As the summer sunshine quickly fades into cool fall evenings, the Oregon State Athletics’ fall season has come to a conclusion. Here’s a recap of how each sport’s fall season went.

Despite winning only two games in his first season at the helm, head coach Jonathan Smith and the team took a significant step forward in 2019. Smith and his staff got one of their marquee victories of the season on Nov. 15, the first conference home win since defeating the University of Oregon in 2016.

“I do feel like we’ve got a big-time staff around here, these guys have been in it for the long run, battling through some ups and downs last year, more downs than ups,” Smith said after the victory against Arizona State. “These players are the ones now winning games on the field.”

Widely considered one of the worst teams in the PAC-12 entering the season, Smith’s Beavers finished 5-7. After more than doubling the win total this year, many fans are looking forward to seeing what Smith and the team can do next season.

After going 11-6-3 and making it to the NCAA Tournament last year, head coach Terry Boss and the team had another winning season. They went 8-6-2 and won six home games. The team finished third in the PAC-12 and did not make the postseason, finishing at No. 50 in the RPI rankings.

In his first season leading the Women’s Soccer program, head coach Matt Kagan led the Beavers to an 11-6-2 record just one season after a 2-17 finish in 2018, and started the season with an 8-game win streak. In 2019, Kagan’s Beavers were 6-4-1 at Paul Lorenz field and missed out on the NCAA tournament despite nine other PAC-12 teams making it.

In her second season at OSU, sophomore goalkeeper Bridgette Skiba allowed an average of less than one goal per game and had six shutouts.

“These kids are everything,” Kagan noted earlier in the season. “The focus should be on these players. These players have come in, they wanted a change, they’re focused every day, (and) they work their tails off.”

For the second straight season, OSU Volleyball finished under .500, though the team did improve its conference win totals. After a 2018 season that saw the roster deeply affected by injuries, the Beavers got out to a fast start by going undefeated in the RedHawk Invitational tournament. However, after home victories against Oregon and Colorado, the team started its first of two long losing streaks on the season.

“Beating Oregon for the first time since 2014 was amazing,” said junior defensive specialist Grace Massey earlier in the season. “Whenever we play at home I have the feeling that I need to defend my home court.”

The Women’s Cross Country team had another solid year under head coach Louie Quintana, his second leading the program. One year after finishing sixth in the PAC-12 Championship, the team placed seventh out of 35 teams in the 2019 NCAA West Regional Championship,. Leading the Beavers was junior Lexi Reed, who finished 28th out of 244 runners.