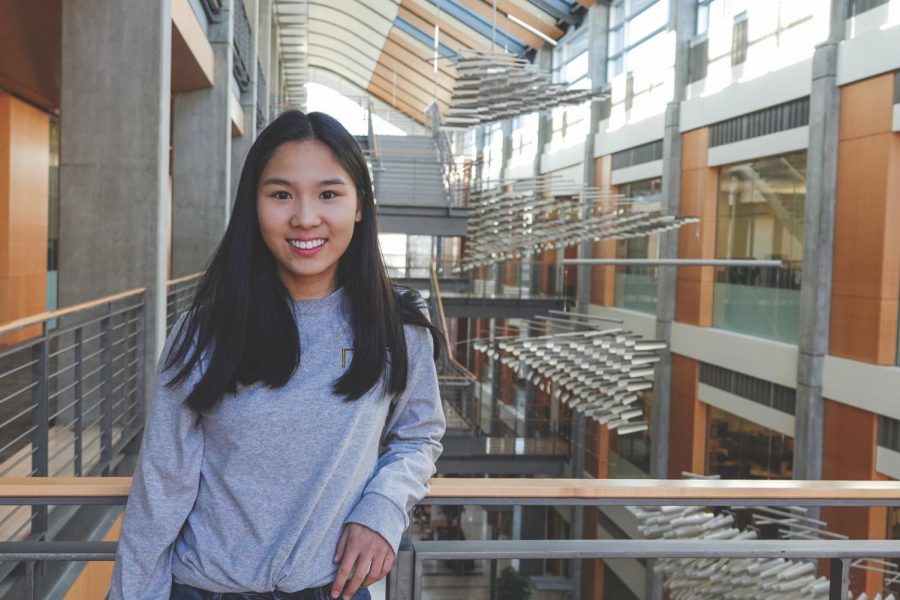 Iris Fu, the author of “Gateway to American Economics: An Introduction for Young Students on Their Way,” is 17 years-old and part-time student at OSU and at Crescent Valley High School. She is pictured here in Kelley Engineering Center, where she spent most of her time while producing the economics book.

While most students dread buying textbooks, 17-year-old Iris Fu, part-time Oregon State University student, wrote and published her own in September, inspired by the push for more women in the field of economics.

Fu a senior at Crescent Valley High School, has been taking classes part-time at OSU since her junior year, and became a published author before the age of 18. Fu wrote, “Gateway to American Economics: An Introduction for Young Students on Their Way,” over the summer while taking an economics class on the OSU Ecampus. Econ 383, The Economics of Discrimination, was the class that helped Fu decide on having the book be gender-neutral, according to Fu.

Fu has had a passion for Economics for years, even with it being a male-dominated field. Fu said economics appeals to men because most people in the field are white males.  Being a woman of color herself, Fu said she wants the book to reach girls at a younger age.

Fu said being a girl in Economics hasn’t been the easiest for her. She took part in a nationwide economics challenge where she was the only girl competing in the state finals.

“It made me feel like I wasn’t competent because I was different than everyone, but then I ended up winning the round and realized girls are just are competent,” Fu said.

According to Fu’s OSU economics professor Dell Champlin, also a woman, who has been in the field of economics for 44 years, has gone through similar struggles.

“In Illinois, we had an economics department of 17 people, I was the only woman for a couple of years,” Champlin said.

The feelings expressed by Fu and Champlin are common ones found in the field.

“There’s this active effort to bridge the gender gap in STEM, but econ. is less talked about,” Fu said.

Fu said there’s a stereotype that men are better at certain subjects and that girls may just not be as good.

“I would agree with her, economics is extremely male-dominated,” Champlin said about the push for more gender equality in STEM but not economics. Fu said she believes her book being supplemented with another textbook may be the push.

“I have not checked[profits]; money is not a big thing for me,” Fu said. According to Fu, her mission is more important than the money she would make off this book.

In fact, educators can get a free PDF version of her book through her website. Hard copies can be purchased online. Fu said she is completely fine with a teacher taking printed copies from her book and giving it to students in the class for free.

“This is a free resource for educators to use in their classroom to welcome girls into the field and not make people feel excluded,” Fu said.

A high school senior, Hanna Teerman, was gifted “Gateway to American Economics: An Introduction for Young Students on Their Way,” and read the book on her free-time. Teerman said the book has a lot to offer in comparison to traditional textbooks.

“The way it’s set up intentionally is very smart compared to high school economics books. Economics can be this abstract thing for high schoolers to grasp, especially for the first time they are learning it, this is very simplified,” Teerman said.

Some may have doubts if Fu is credible enough to write a textbook being, she’s only 17. Fu said she’s qualified to write a book on the field of economics after self-studying for the AP Economics exams and achieving the highest score possible on the tests.

“She’ll be fine,” Champlin said. “Sometimes economists can make it more difficult, so she might be more qualified than some of the high-power economists.”

Teerman said that Fu’s passion for empowering women to get into economics is a way for her to bridge the pay gap in the United States. Fu will also be able to help women in other countries by educating them in economics.

This book is only a starting point for Fu. Once she spreads her initial message of getting girls into economics, she plans

“I think throughout my career I would try to advocate for gender equality,” Fu said.