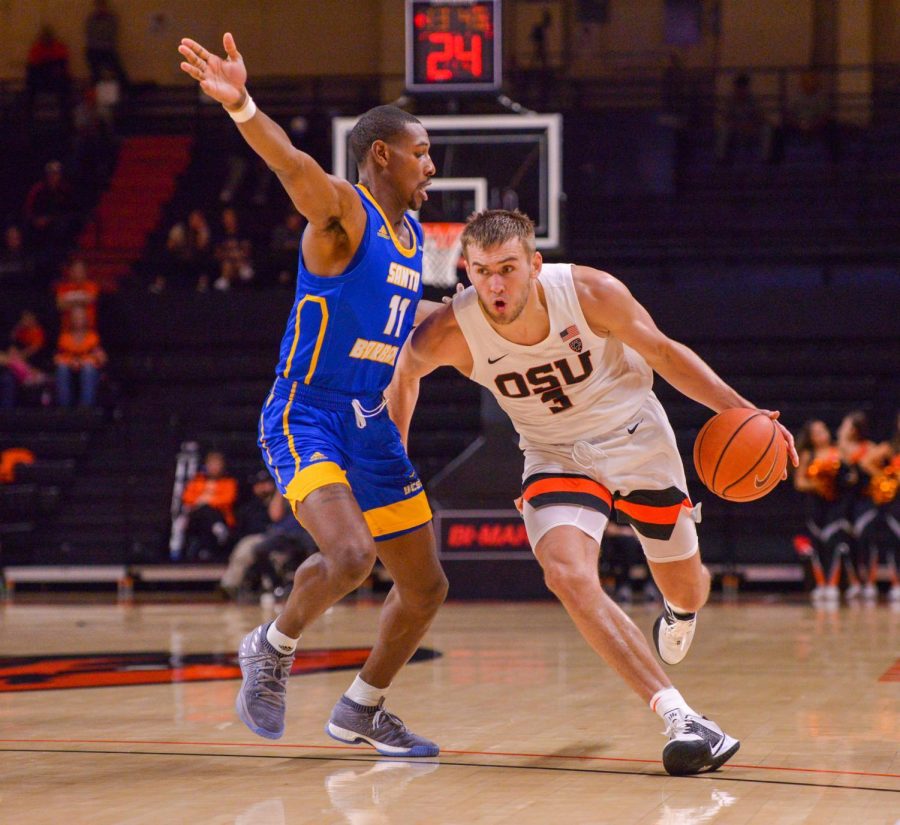 The Oregon State Beavers improved their season record to 4-1 on Wednesday, Nov. 20 by beating the UC Santa Barbara Gauchos by a final score of 78-67.

UC Santa Barbara managed to keep the game close in the first half, going into the break down 34-27. However, any hope of an upset win was put to rest in the second half by a Beavers offense that came out firing after the halftime break.

Oregon State opened the second half by making nine of their first 11 shot attempts. The quick second half start for the offense was matched by a strong showing from the defense which led to Oregon State outscoring the Gauchos 17-7 through the first seven minutes of the final half.

The Beavers led by as much as 19 points in the second half, and while UC Santa Barbara was able to close the gap by the end of the game, Oregon State’s offensive efficiency kept the Gauchos from claiming the lead.

After shooting 44 percent from the field in the first half, the Beavers ended the second with a 69% field goal percentage, making 18 of their 26 second half shot attempts. Despite finishing four for 15 on their three point shots, Oregon State was able to put points on the board with strong close range offense.

The Beavers found success on offense by controlling the paint throughout the bulk game. Of the Beavers 78 points, 40 of them came in the key. On a night where Oregon State struggled from beyond the three-point line, having success on their close range shots was critical. Beavers head coach Wayne Tinkle said having success in the paint was a focus for the team in his post game press conference.

Few players made as strong an impact for Oregon State as their senior forward Tres Tinkle. Tinkle led the game for the Beavers in both points and rebounds, ending with 27 and 11 respectively. With Wednesday’s performance, the senior forward added another double-double to his resume, bringing his career total to 25.

Tres Tinkle moved into seventh place on Oregon State’s career  double-double record list against the Gauchos, passing former Beavers’ forward Jay Carty, who finished his college career in 1962 with 24 double doubles. Tinkle’s record breaking pace has become something of an expectation for him this season. Through the Beavers first five games, Tinkle has had four double-doubles and possesses double digit averages in both points and rebounds so far this season.

Alongside Tinkle, junior forward Alfred Hollins and junior guard Ethan Thompson Jr. both ended the night scoring in double digits. Hollins walked away with 13 points and five rebounds, while Thompson added another 16 points of his own on 8 for 12 on field goals.

Tres Tinkle talked after the game about how the team was able to find offensive success in the second half, giving credit to the team for sticking to the gameplan.

“I felt early on we were getting what we wanted, if we were executing and running our stuff,” Tinkle said. “So we focused on sticking to what we’re running, what we were calling. Cutting hard and just moving around, moving without the ball. I think that caused some confusion on their end and allowed us to get some easy ones.”

While Oregon State found late success scoring the ball, UC Santa Barbara struggled throughout to find any offensive rhythm. The Gauchos finished the night shooting 37% from the field, their lowest single game total of the season. The Beavers defense clamped down on the Gauchos, allowing UC Santa Barbara 11 assists and creating 14 turnovers.

The Gauchos offense struggled in particular on their three point shooting. After coming into the game against Oregon State averaging over 37% on their threes, they finished the night making 19%, going 5 for 27 from deep.

After the game, head coach Wayne Tinkle said he felt the Beavers had a strong performance on defense, which led to most of UC Santa Barbara’s missed shots.

“Overall we really contested well behind the arc and that’s something we’re trying to get better at,” Tinkle said.

“I was disappointed with our effort to box out and go pursue the ball,” Tinkle said. “A lot of times we would just run to the rim and wait for mama bird to drop food down in our mouths… we gotta put bodies, create space, and then if its a long rebound, have the toughness to go chase it down.”

Despite the rebounds not going their way, the Beavers came out of the night with a win to take their season record to 4-1. Meanwhile, UC Santa Barbara lost their third straight game, bringing their record to 1-3.

The Beavers were able to win their third straight game on Nov. 23, beating the Grambling State Tigers 80-58 in Gill Coliseum and bringing their record to 5-1. Four players for the Beavers scored in double digits versus the Tigers including Tinkle, Thompson, Hollins and senior forward Kylor Kelley. Kelley also ended with 7 blocks for the Beavers.

Oregon State will have a chance to increase their winning streak to four games when they take on the San Jose State Spartans on Wednesday, Nov. 27 at 8 p.m. in Las Vegas, Nev. Their matchup will be televised on Fox Sports 1.