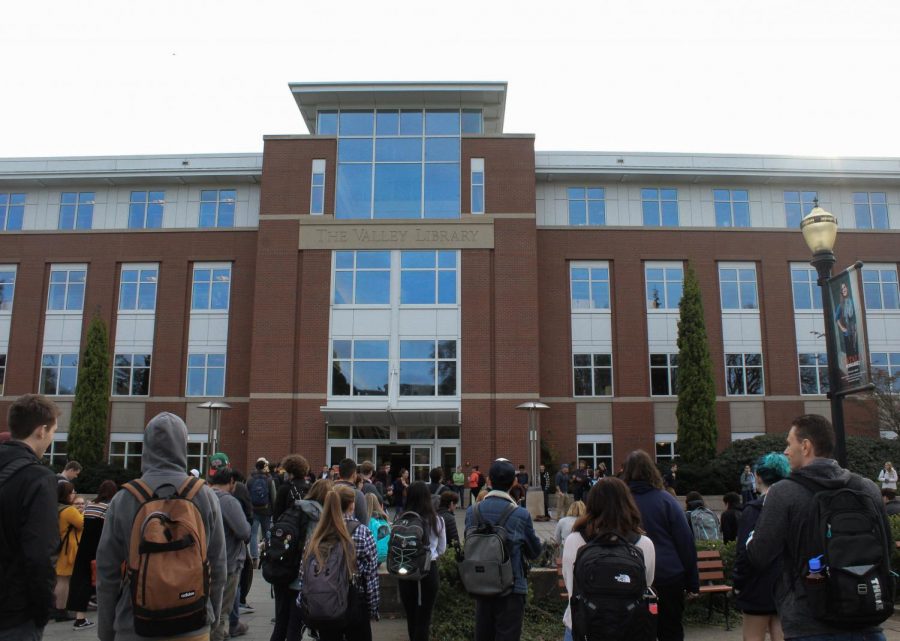 If you walked past the Valley Library on Thursday, Nov. 14, between 1 and 2 p.m., odds are you passed by a counter-protest in reaction to two preachers known for their controversial sermons on college campuses.

Shawn David from LukeTenTwo Ministries and Keith Darrell of Whitefield Ministries, started their sermon shortly after 1 p.m. directly outside the doors of The Valley Library. They split their time, each preaching separate messages, with David speaking until 1:30 p.m. and Darrell going on to speak until after 2 p.m., when the protestors caused too much noise for him to continue.

This isn’t the first time these preachers have been to OSU to spread their message. David and Darrell visited campus last May, where a similar situation ensued.

Around 1 p.m. David began his message, which was about placing blame on secular morals and asserting that Christianity was the one true religion, according to Nora Vu, a first-year Biology major.

“I didn’t like anything they were saying, the fact that they we’re trying to justify rape and misogyny and just being really sexist,” Vu said.

Darrell and David were exercising their First Amendment rights, following the “Time, Place and Manner Restrictions,” labeling that as long as the organizers place restrictions on the noise level of their speech, the number of protesters at the scene, and the size of the signs they bring onto campus with them, then they are allowed to have what is defined as a “speech activity.”

The location of the protest is also significant to the regulation rules. The Valley Library is one of four different options for speech activities to occur, along with classroom buildings, research and laboratory facilities or Plageman hall.

In response to the preachers, library staff brought out a table with their own protest materials: poster boards, markers and pins with “Everyone Is Welcome” printed on the surface. Sagan Wallace, the lead evening supervisor, said, “It’s his right of free speech to say what he wants… but what we want is to make sure he doesn’t come in the library because of the rules we have.”

Reece Lathouwers, a first-year OSU student and protester at the scene, was one of many who decided to create a sign to hold during Darrell’s sermon.

“He was talking over people and yelling… and then he said ‘So you’re a homosexual’… and then I was showing my sign and he started to get mad at that, and said ‘So you see a guy like this and you know he doesn’t respect women,’” Lathouwers said.

Darrell’s message was centered around the sins in sexual activity and his correlation of those ideas to homosexuality.

After a few minutes of constant rebuttal between Darrell and other students who disagreed with his rhetoric, Darrell and David broke out into smaller groups and allowed students to ask them questions.

“It was a boiled down version of what happened… it got a little too heated so [Darrell] said he was going to call it off,” said Chase Warren, a fourth-year computer science major, who stayed and listened to the smaller group of students question the intent of Darrell’s sermon. “I think it was a lot cleaner of a conversation than what was happening before. Things like this open up the campus to bigger conversations and I love that because I get to talk to people that I would never talk to otherwise.”