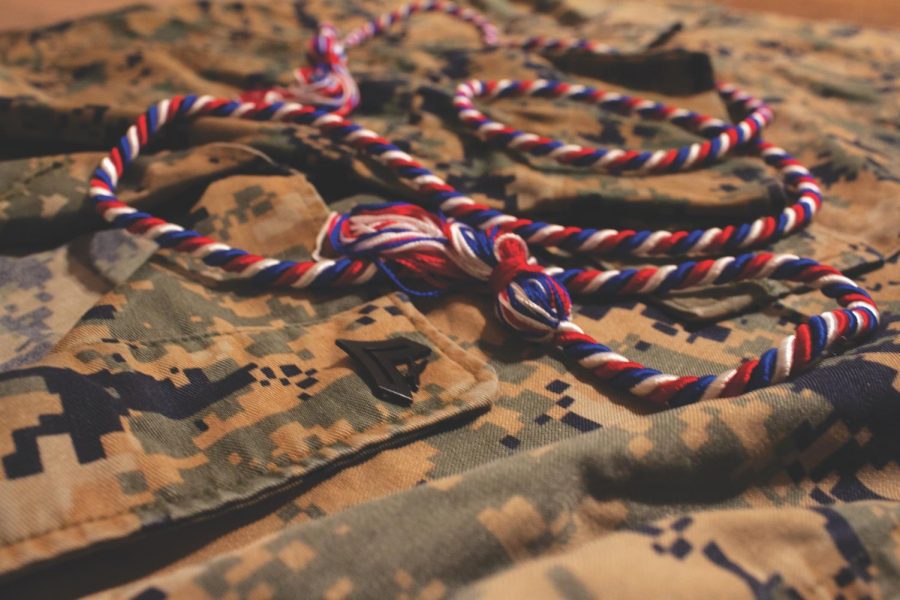 Marine Corps uniform and a veterans honor cord signify the transition from the military to college.

On Monday, Nov. 4, the Student Veterans Association kicked off the week-long events with a grand-opening of their new Military and Veteran Resource Center location, in Snell Hall, room 150. According to Willie Elfering, the military and veteran resource advisor at OSU, this new space will allow SVA to come together as a community. The space holds tutoring and lounging areas as well as commonspace for the members of SVA to gather. This term, SVA will also be adding a “peer advising program” to assist incoming veteran students in their transition.

Again on Monday, Nov. 4, the “Behind the Uniform” event occured on campus for a second time after premiering last year. According to Steven Olson, a fourth-year speech communications major and president of SVA, the event took place in the Student Experience Center plaza throughout veterans week.

“This event is about exploring what the transition looks like for some of our veterans on campus and giving them a place to be able to get those experiences off their chest and educate,” Olson said. “It echoes into the idea that we’re peers with everyone, but we’ve spent four plus years earning these things that don’t directly impact our education.”

Olson said he believes it is alright for their honors and experiences to be seperate from their education, but they should still be acknowledged.

At last year’s “Behind the Uniform” event, veterans around campus held conversations with students and community members about their experience in the transition from serving in the armed forces to attending a university, this year, some of the participating veterans brought their uniforms along to teach people about the honors and badges they’d earned throughout their time serving.

Last Tuesday, “Healing a Warrior’s Heart,” a documentary that explores the use of Native American healing methods to help returning service members, was played in the Military and Veterans Resource Center, along with a documentary titled “Island Soldier,’’ which follows the veteran experiences of the Micronesian and Pacific Islander community.

According to Rae Briceno, a business information systems student and SVA member, SVA helped with this event in hopes of recognizing that veterans have multiple identities and that, as she puts it, “veterans are people too.” The Micronesian Islander Community, an organization who aims to unite all Micronesian and islanders, promote social justice and preserve the Micronesian culture, also helped with the showing.

A Lioness documtentary and veterans panel was held last Thursday, to shed light on female Army support soldiers who were a part of the first program in American history to send women into direct ground combat. At the panel, guest speaker Jessie Miller, the first Lioness prototype, answered questions.

On Veterans Day, federally observed on Nov. 11, the city of Albany, Ore. put on a parade in honor of those who have served in the U.S. military. The parade website states; “The streets of Albany are lined with thousands of cheering spectators who come together each year, rain or shine to simply offer their appreciation to the men and women who have served our country.”

Following the end of the parade is an award-ceremony, where the most creative float in the parade recieves recognition. Additionally, the city of Albany hosts a Veteran of the Year banquet, a pancake breakfast and a Veterans Day memorial service.

This year, Oregon State Athletics hosted almost a full week of sporting events dedicated to veterans. Oregon State Athletics offered two complimentary tickets for each sporting event to both those who are currently serving in the U.S. military, and discharged veterans. Athletics hosted a military appreciation football game on Friday, with a tailgating party before the game. Mission 22, an organization who is “dedicated to healing America’s veterans when they need it most,” helped with the tailgating festivities.