Daarstad: Gun control is no joke 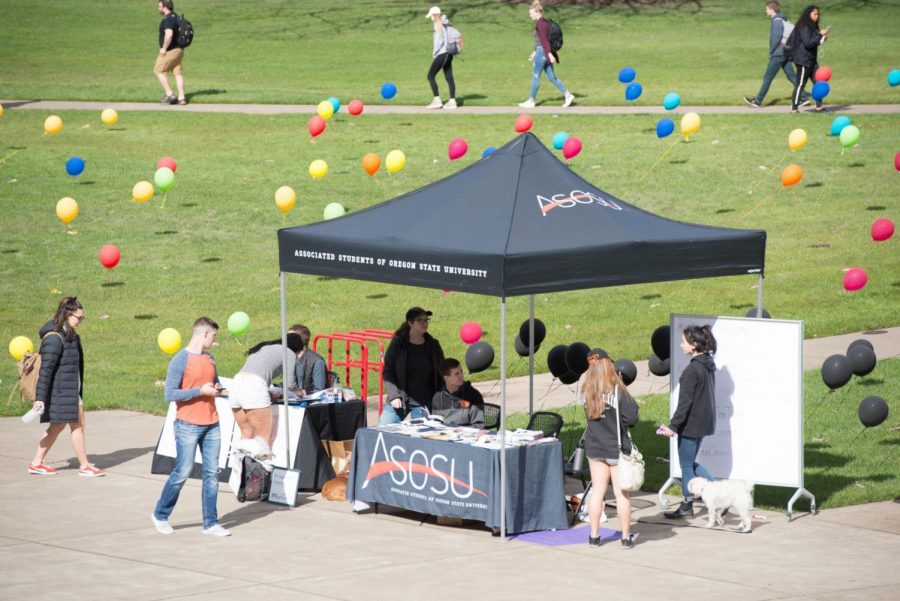 Back in 2018, the Associated Students of Oregon State University used balloons to draw attention to the issue of school shootings.

America has an intense gun culture, but gun control is needed in order to reduce gun violence and death in America.

The debate around gun control seems to find its way into the political debate in multiple ways, such as the release of the new movie, “Joker.”

“Joker” has been criticized for the violent and mentally unhealthy portrayal of the character, with critics fearing that it will insight more gun violence in America.

Also, some feared another mass shooting would occur, similar to that of the 2012 mass shooting in a theater in Aurora, Colorado at the screening of the Dark Knight Rises, that killed 12 and left 70 injured.

This controversy is leading to more discussion around gun reform in America.

The Aurora, Colorado shooting is the 19th most deadly modern mass shooting. Mass shootings are not the largest contributor of gun deaths in America, as they only account for less than 1% of all gun deaths.

1% may not seem like much, but when looking at the bigger picture, that 1% is still hundreds of people who have lost their lives, and even more who have lost loved ones.

In Benton County there is a total of 88,740 people. In that population, the rate of gun deaths per 100 thousand people is 11.4 people.

The majority of gun deaths in America do not come from mass shootings, but rather from homicides and suicides.

Although, an assault rifle ban has shown to reduce the number of mass shootings, and therfore the number of casualties, the ban would not result in a huge reduction in overall gun deaths.

Brett Burkhardt, an associate sociology professor at Oregon State University, explained that one of the two aspects that need to be discussed around guns and gun policy is the rate of suicide by firearms.

“Suicide is about two thirds of all gun deaths, and that is not what comes to mind when we talk about firearms,” Burkhardt said.

However, Oregon is above the national average with about 82% of gun deaths being suicide.

Policies that make attaining guns more difficult, and gun-safe laws that require guns to be secured with a trigger or cable lock, or in a locked container, save lives.

Safe storage reduces the ability for children and teens to access a weapon or firearm, meaning, safe-storage laws encourage responsible firearm ownership and can help prevent gun deaths and injuries.

Studies released in the Journal of the American Medical Association and JAMA Pediatrics illustrate the effectiveness of safe storage laws at reducing suicides and accidents involved with guns.

Moms Demand Action is a nonpartisan grassroots organization with over six million supporters, and the goal to protect people from gun violence, but also to support the second amendment, the right to bear arms.

The Moms Demand Action chapter within Oregon has done a lot of work to implement gun reform policies to help reduce gun violence. This legislative session they are focusing on pushing safe-storage laws at the Oregon legislature.

Another, focus on reducing gun violence has been concealed-carry laws.

Concealed-carry laws vary per state and is believed by some that it helps in deterring crimes. In Oregon, concealed carry, carrying a handgun in a discreet or hidden manner in public, is legal with a permit.

However, concealed carry laws are not effective ways to prevent firearm incidents that result in injuries and death.

There has been no strong evidence to support the idea that concealed carry laws reduce homicides, violent crimes, or suicides.

Thus, concealed-carry laws are not the solution when trying to reduce homicides, violent crimes, or suicides that deal with firearms.

Universal background checks require any seller of a firearm to put the buyer through a federal database, and research has shown a reduction in firearm homicide rates, lower firearm suicide rates and lower firearm trafficing.

In recent studies, conducted by researchers from Boston Children’s Hospital, University of Maryland and John Hopkins University, have shown that background checks are effective at reducing homicides, violent crimes and suicides.

While guns are an important part of American culture, putting restrictions on firearms is needed to help reduce gun deaths and injuries.

Hilary Uhlig is the Oregon chapter leader for Moms Demand Action for Gun Sense in America and has been volenteering with the organization for the past couple years.

“We simply want to reduce gun violence, prevent unnecessary gun deaths and keep guns out of the hands of dangerous people,” Uhlig said.

Gun deaths and injuries do not just impact one person, they affect friends, families and the community.

Whether to implement gun reform or not should not be an issue.