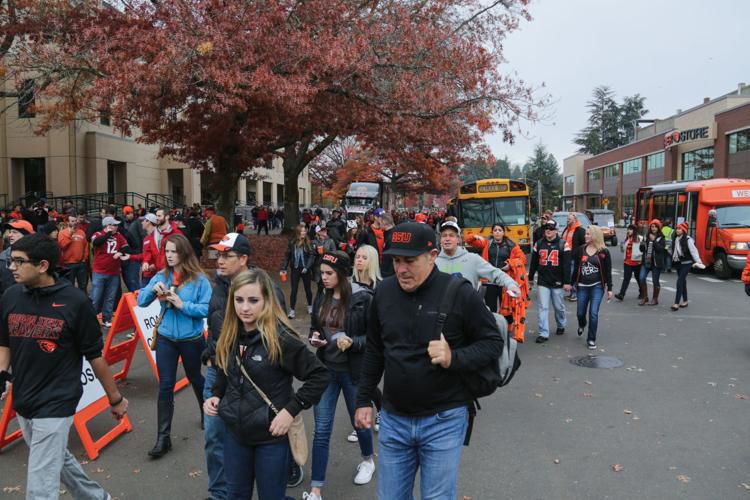 Students and their familes head toward Reser Stadium to watch the Fall Family Weekend football game.

Among the comedy show will be an obstacle course, a Friday-night football game and a brunch; just a few of the events happening at this year’s Family Weekend showcase. From Nov. 8-10, OSU will be hosting one of two bi-annual program weekends, geared towards reconnecting students with their parents, and allowing a look into campus life at Oregon State.

One of the student organizations that planned the events is the OSU Program Council, which is responsible for Sunday’s events, including the southern comfort-style brunch and comedy show.

Lizz Duhn, a community and tradition event coordinator with OSUPC, is one of the two main organizers for this year’s comedy show, headlined by Dave Coulier, well-known for his character in the

“My generation watched “Full House” when we were younger, so to have Uncle Joey come to Oregon State to do [the comedy show] has been really exciting for our team,” Duhn said.

The show will be opened by Kellen Erskine, who has appeared on late-night talk shows such as Conan and Jimmy Kimmel, along with being on TBS’s Top Ten Comics To Watch in 2017.

The set for both comedians will run about 90 minutes in totality and will cost $30 per entry ticket. It will be hosted by Duhn and Zahara Kondo, the other community and tradition event coordinator at both the 4 p.m.

The brunch will be taking place on Sunday morning, from 9 a.m. to noon, with food options of either chicken and waffles or biscuits and gravy. Food choice and tickets for a spot at brunch are available for purchase online at the OSU Marketplace website, along with ticket reservations for the comedy show for

For some students, the biggest takeaway of the weekend might just be the opportunity to see their family. Jason Hilliard, a first- year marketing major from California, says he, “finds it harder being from out of state, watching everyone from Oregon go home on the weekends.”

This will be the second year that New Student Programs and Family Outreach will be working alongside multiple OSU departmental and student organizationsl, with hopes to “showcase Oregon State, and what the students care about here,” said Jess Tallant, the parent and family program coordinator at NSPFO. “There are plenty of student organizations running events, which I love because parents are able to see what their

students are involved in.”

Hilliard’s parents, along with other families, are traveling to OSU to attend Family Weekend, some of which, to see how their students have acclimated thus far. Hilliard, being one of those new students to OSU this year, said he misses his family, as this is the longest he’s been

“After being here for five to six weeks, I haven’t seen my parents since move-in day, so I definitely miss them and that comforted feeling of being around my whole

According to Tallant, she and her team will be present throughout the weekend, facilitating a welcome and information table with the hopes to help students and families navigate the schedule and specific events. There will also be a feature on the MyOSU app that will allow students and their families to check the schedule from any location,

This year’s Fall Family Weekend is at the end of week seven, which “comes at a perfect time [because] parents get to return to campus and spend time with students [who] have just finished midterms,” Tallant said. “For first-year students, or new students, it’s nice to touch base at that point. I love that you’ll see grandparents, siblings, [or even] family friends that they’re sharing this experience with.”