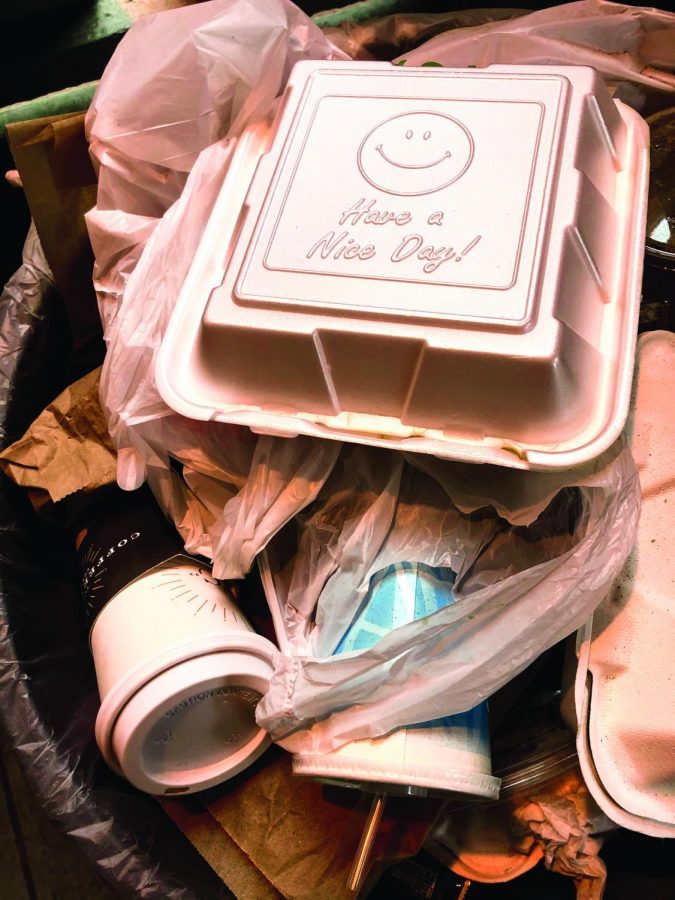 An overflowing garbage can outside of Shepard Hall is filled with plastic cups, bags and takeaway containers.

Several organizations and clubs at Oregon State University are working together on a new proposal to reduce the waste that the university produces. This program will cut back on single-use cups that are not recyclable.

Word of these ideas was passed on to Campus Recycling and the club they sponsor, Waste Watchers, who also took an interest. Since then, organizers have joined together to gather stakeholder feedback from a variety of student and staff organizations on campus.

Now the Waste Watchers club leaders, in partnership with other student and staff organizations on campus, as well as employees who work on food services on campus, are trying to push a proposal to substitute non-recyclable single-use cups for reusable cups.

“There has been a strong focus on reducing the university’s waste for a while now, leading to awesome programs like the first recycling pick-up led by student volunteers in the 1970’s to, more currently, Eco2Go and Last Dam Straw. We saw reducing single-use cups on campus as a logical next step,” Butler said via email.

According to a study conducted for the reusable cup proposal, OSU disposes of 1.35 million single-use cups each year through University Housing and Dining Services and Memorial Union Retail Food Services alone. The environmental footprint of these cups equals more than 81,900 pounds of greenhouse gas emissions, 1,001,000 gallons of water usage, 57,200 pounds of solid waste and 3,900 trees annually.

“It’s rare not to see a student or staff member walking around on campus without a coffee cup in their hand, so our goal with this proposal is to make an institutional change on campus by using reusable cups, which then reduces disposable cup waste,” Taylor Munro, Waste Watchers club coordinator said via email. “This proposal is a step OSU can take to help reduce carbon emissions and lessen OSU’s impact on climate change and the environment.”

The proposal would require those paying with dining dollars or Orange Rewards to use a reusable container for all purchases. Customers paying with cash or credit card will be able to buy single-use cups with a 10-cent fee to cover the cost of the disposable packaging. It is expected that by doing this, OSU will be able to eliminate 78% of the non-recyclable single-use cups that the university purchases every year.

In an email, Andrea Lynn Norris, OSU marketing and development coordinator for Materials Management and Waste Watchers advisor, said, “Waste prevention and reuse stands to reduce our impact further than recycling does. But most importantly, no cups of any material are accepted for recycling or composting in our region, because there is no market for them. Cups are one of those most common contaminants found in recycling bins on campus, which increases the cost of recycling and often results in liquid spills that contaminate other recyclables.”

Norris said that proposal drafters have aiming to make this program accessible to everyone around campus by making reusable bottles as accessible as possible. This includes providing all dining members one reusable bottle at no cost, providing a free bottle to those receiving MealBux, offering at-cost bottles to all customers, and marketing the Adopt a Bottle program as a way to obtain bottles at no charge.

The proposal drafters have also contacted Disability Access Services regarding recommendations on how to make accommodations to those with disabilities.

Drew Jacobson, program assistant for campus recycling, said via email, “I think the goals of this proposal are pretty unique­—rather than attempting to directly create a behavior change, we’re addressing the issue with an institutional change.”

In an email, Brandon Trelstad, sustainability officer at OSU said, by reusing materials, the university also reduces the carbon emissions that are created from the extraction, manufacture and transportation of materials used to make things like disposable cups.

Butler will meet with UHDS and MURFS in week nine or 10 this fall to discuss the proposal. Waste Watchers expects that the Reusable Cup program will be accepted by the end of this term and implemented in fall 2020.