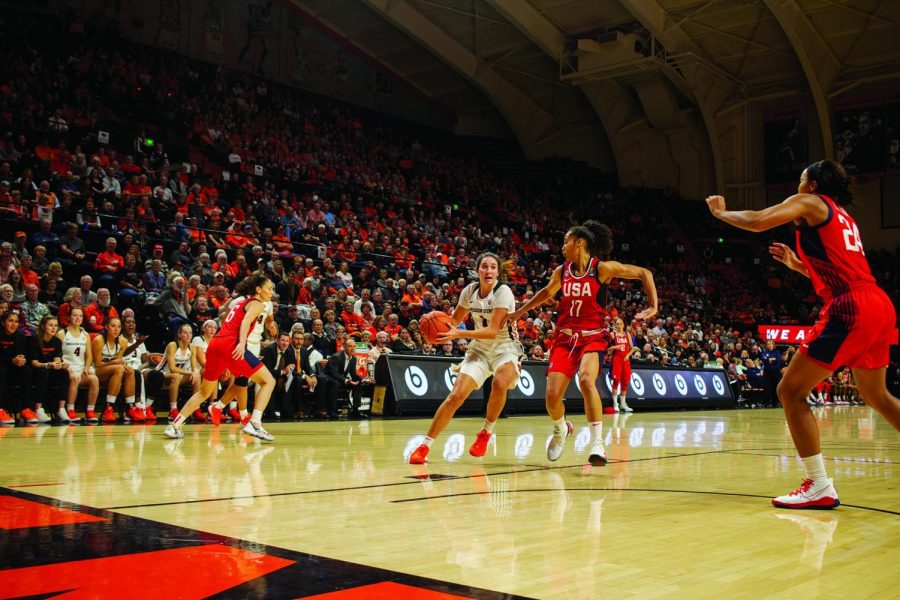 OSU junior guard Aleah Goodman attempts to drive to the basket while being defended by Team USA guard Skylar Diggins-Smith.

On Monday, Nov. 4, the United States Basketball Women’s National Team came to Corvallis, Ore. to take on Oregon State in what was a great night for both Beavers fans and players.

The event was part of a national college tour for Team USA. The team faced four colleges through in the first week of November in preparation for the 2020 Summer Olympics, where Team USA will be chasing their seventh consecutive Olympic gold medal.

Team USA’s tour was meant to give the team practice against some of the best women’s college basketball programs in the country, and given their success in recent years, Oregon State made the four team cut.

The Beavers have produced eight first team All PAC-12 players since 2014 and have made the NCAA tournament six years in a row, including four straight appearances in the sweet sixteen, two trips to the elite eight and a final four run in 2016.

With both the Associated Press and Coaches Poll voting Oregon State a top 10 team, the choice for Team USA to make the trip to Corvallis to play the Beavers was easy. And against Olympic athletes and future WNBA Hall of Fame players, Oregon State lived up to the billing of an elite program.

Despite a final score of 81-58 in favor of Team USA, the Beavers went into halftime against the country’s best basketball players down 36-31. Oregon State began the game playing great basketball and assistant coach for Team USA Dan Hughes talked about how well the Beavers played against the Olympic team after the game.

“They made us have to raise our game, which is part of what this tour is about,” Hughes said. “They were persistent, they tempoed the game, they outrebounded us in the first half.”

Between the competitive game and the chance to see basketball legends on Team USA, Beaver fans brought energy to Gill Coliseum throughout the game. Over 6,100 fans came out to support both teams but brought a different level of excitement when it came to cheering on the Beavers.

“It’s fun. It’s loud.” Oregon State fan Chris Lorenzen said in a halftime interview. “It’s not as intense a game as a PAC-12 game, but the Beavers are playing well and the crowd’s behind them.”

Lorenzen was not the only person in Gill who had noticed the energy in the crowd. Oregon State head coach Scott Rueck opened up his press conference by commenting on the excitement in the stadium after the game.

“What an atmosphere that was… usually that comes a little bit later in the season and this year it came on November 4,” Rueck said. “I think they had to find more room for all the band members because everybody wanted to be here tonight. But that just sums up Beaver nation.”

The Team USA tour presented a chance for Beaver basketball fans to see their team against some of the best players in the world. For many fans, this was the first time they have been able to see this year’s Oregon State Women’s Basketball team at all.

The competition for this season’s Beavers’ basketball team will be tough. Through the regular season, Oregon State will play eight games against teams ranked in the Associated Press Top 25. They will have two games against the third ranked Stanford Cardinal and two more against the number one ranked Oregon Ducks.

The Beavers also face off against two of the five players in the preseason Associated Press All American team in senior forward Beatrice Mompremier of the Miami Hurricanes and Oregon’s senior guard Sabrina Ionescu. Even with the level of talent Oregon State will see through the regular season, none of it measures up to what Team USA brought to Corvallis last Monday.

While the chance to watch the faces of the WNBA like A’ja Wilson and Skylar Diggins-Smith on Team USA was fun for fans, it was something special for the Oregon State players. Beaver junior guard Destiny Slocum talked about what it felt like to match up against the players on Team USA.

“It’s a blessing. We’re playing across from people that we’ve looked up to our entire lives,” Slocum said. “I can’t remember a day I watched women’s basketball and hadn’t seen Diana Taurasi on the other side and Sue Bird… I saw them read screens better than anybody I had ever seen read screens before.”

While the game was a “blessing” for Slocum and Oregon State, the day the Beavers spent on the court with professional players might have been more of a preview of what’s to come for the WNBA rather than a one time event for some Oregon State athletes. The Beavers roster includes talent that has the potential to be future WNBA draft picks.

Destiny Slocum and Beaver senior guard Mikalya Pivec were both featured in ESPN’s most recent WNBA mock draft, where both players were projected to be first round draft picks next season. Center for Team USA and the Minnesota Lynx Slyvia Fowles talked about Oregon State’s talented roster and the future of the WNBA after the game.

“From a talent standpoint, I think they can beat the best,” Fowles said. “From what they showed, the future looked very bright for the WNBA.”

Since his arrival, head coach Scott Rueck has established a roster built to make deep tournament runs, and against a high caliber Team USA squad, they were able to force a competitive game. Oregon State fan Matt Taylor had taken notice of the team’s talent, and said he wasn’t surprised that the Beavers were playing close against the national team.

“Not at all, because we have Aleah Goodman.” Taylor said in an interview. “(We’re) very well coached, it’s a great team.”

The Beavers will come into the season with talent and high expectations, being ranked seventh in the Associated Press Top 25. In order to help them live up to their goals, Oregon State is hoping that the game against Team USA can provide lessons that will carry them throughout the season.

While Team USA is using their NCAA tour to help them practice and prepare for the Summer Olympics, the Beavers are using the opportunity they had to play world class athletes to prepare for the season ahead of them.

Beavers’ junior guard Aleah Goodman talked about the lessons she learned from Team USA and how the Olympic players emphasized the importance of watching more basketball in order to learn and grow as a player.

Despite the losing final score, the game was a special opportunity for the Beavers and their fans.