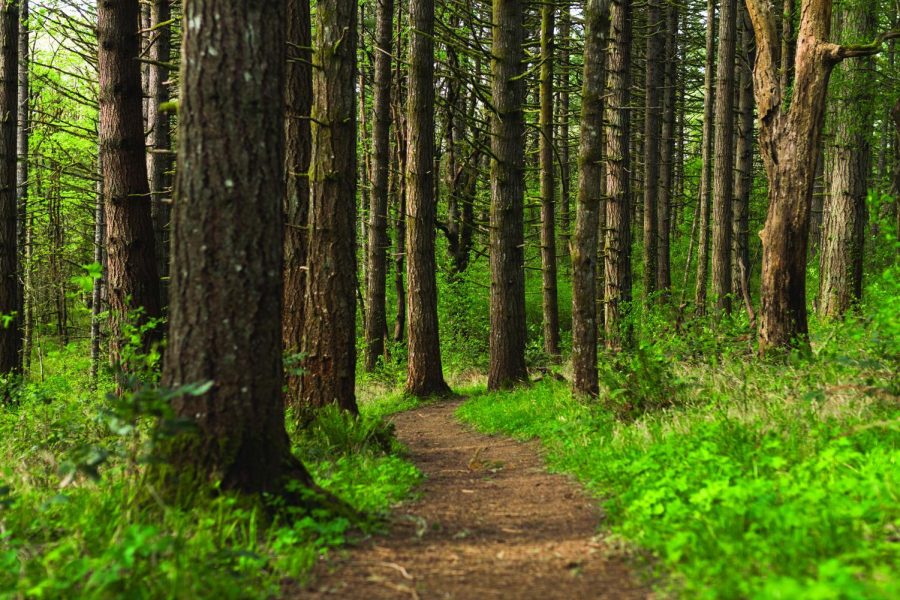 Community members troubled by the loss of a stand of trees in the McDonald and Dunn Research Forests braved the wind and cold on Sunday at Willamette Park to honor some of Oregon’s longest living inhabitants.

The trees were part of a clearcut known as “No Vacancy.” The cut, done by Oregon State University in May, toppled an area that consisted of about 16 acres of old-growth, virgin forest. Among the trees cut was a massive Douglas-fir dating at 420 years old. A section of the tree was displayed on an altar, putting in perspective the long life of the tree– showing important dates in relation to the rings. Attendees paid respect by offerings of flowers and hand written notes that they laid on the trunk. In response to public outcry, the College of Forestry’s has reclassified the remaining 36 acres in the Sulphur Springs/Baker Creek stand, where the clearcut occured, to protect them from logging.

Sunday’s event was titled a Forest Memorial Service. Carly Lettero, the Program Manager of the Spring Creek Project said in a press-release that “The event will honor the forest that was so suddenly taken from us, and help mourners find some solace and meaning as they face the loss of so many soaring trees and small, singing lives.”

Oregon State University’s College of Forestry has drawn sharp criticism for the clearcut. Acting Dean Anthony Davis has since called his decision a mistake.

“We made a mistake in carrying out this recent harvest,” said Davis in a July 12 memo to faculty and students.

Additionally, Davis addressed the issue in a letter sent to members of the College of Forestry on Monday, Oct. 21.

“We cannot go back to the past, but we can choose our path forward. The College of Forestry has been presented with an opportunity to learn and we are excited to engage in constructive discussions around multiple-use management of forests,” said Davis.

“As we philosophers are want to say, s— happens,” said Kathleen Moore, who delivered a homily at the memorial in tribute to the fallen stand of trees. Moore is an OSU professor of Philosophy and co-founder and senior fellow of the Spring Creek Project. Moore was the lead organizer of the event.

The Spring Creek Project is an organization sponsoring writer’s residencies, and convenes lectures and conversations regarding what they believe to be important issues of human health and nature. The memorial event was held in partnership between the Spring Creek Project and the Friends of OSU Old-Growth, which advocates for what is left of the old-growth within the 15,000 acres of forest under the control of OSU’s College of Forestry.

According to Moore, as she went on to outline, stewards of Oregon forests can’t afford to make mistakes such as the “No Vacancy” clearcut.

“We have to remember that we are not in ordinary times… We must empower forests to save our skins,” Moore said.

Moore described what she viewed as the felling of the trees to fund overcosts associated with expensive projects taken on by the College of Forestry as irresponsible. When she mentioned the price at which the timber was sold– $416,000– there was an audible sigh from the crowd.

Doug Pollock, the founder of the Friends of OSU Old-Growth, has played a role in raising awareness for the issue. Pollock first saw the “No Vacancy” clearcut on a run in May, and he started the organization to advocate for the trees.

“I’ve always felt that right from the start it’s much bigger than 16 acres of old-growth, this is really something that will affect generations to come. These trees stood for ten, twelve, fourteen generations, and when you lose something like that it has ramifications far beyond the forest,” Pollock said. “My son, who was contemplating an education in forestry, lost interest based on what happened. Somebody from Portland contacted me who was interested in moving to Corvallis, but when they heard about what happened to the old-growth that was cut they were devastated. He said, ‘We don’t want to move to Corvallis anymore.’ And I was saying, ‘You need to come, we need more people like you.’”

“Based on the age class distribution and stand structure, the remaining 36 acres in the Sulphur Springs/Baker Creek stand (where the No Vacancy harvest occurred) will be reclassified into our mature forest reserves,” said Davis in the Oct. 21 letter.

The stand of trees cut down in May were not protected under the 2005 McDonald-Dunn Forest Plan, but now the remaining old-growth trees in the area will be.

Oregon’s Poet Laureate, Kim Stafford, spoke at the memorial to pay his respects to the fallen giants. And in a poem that he wrote for the event titled “2519,” he pondered what change humanity may go through in the time it took for that old Douglas-fir to grow had it sprouted now.