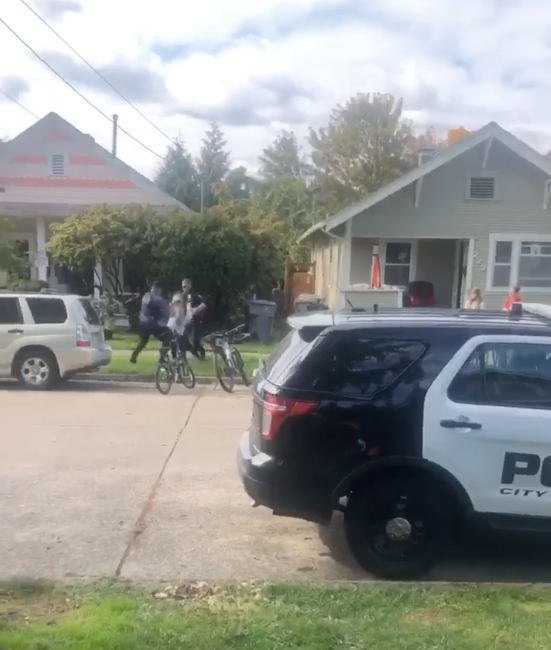 Hansen, a fourth-year student, was arrested by Oregon State Police Trooper Kelly Katsikis on Sunday, Oct. 13 after being pulled over for allegedly riding her bicycle on the wrong side of the road. Hansen refused to present identification to Katsikis, asking to view the law which required her to present it, and was subsequently arrested. Controversy erupted thereafter, with some community members alleging wrongful arrest, racial profiling and use of excessive force during the arrest, in which Hansen hit the ground twice. Some community members believe Hansen should have complied and challenged the stop later. OSP has said it is reviewing the incident, and released Katsikis’ body cam footage in an effort to be transparent. While the traffic violation case is still open, the two criminal charges of interfering with a peace officer and resisting arrest have been dropped. According to Haroldson, he did not see those two crimes occur in the body cam footage.

Although bicycles are considered a vehicle under ORS 814.400, and a driver’s license must be presented when lawfully stopped while driving a car, there is no statutory requirement stating that bike riders must provide identification when stopped by police, meaning Hansen was within her rights to refuse to provide identification.

Corvallis Police Chief Jon Sassaman earlier said to the Gazette-Times that while he did not want to comment on the question of whether racial bias was involved in the initial stop, he believes the state trooper’s video shows no sign of excessive force, only an establishing of control.

The question of whether the amount of force used by OSP was legally justified or not also partially depends on whether or not the arrest itself was lawful.

“If an arrest occurs unlawfully, any force used after that should not occur,” Haroldson said.