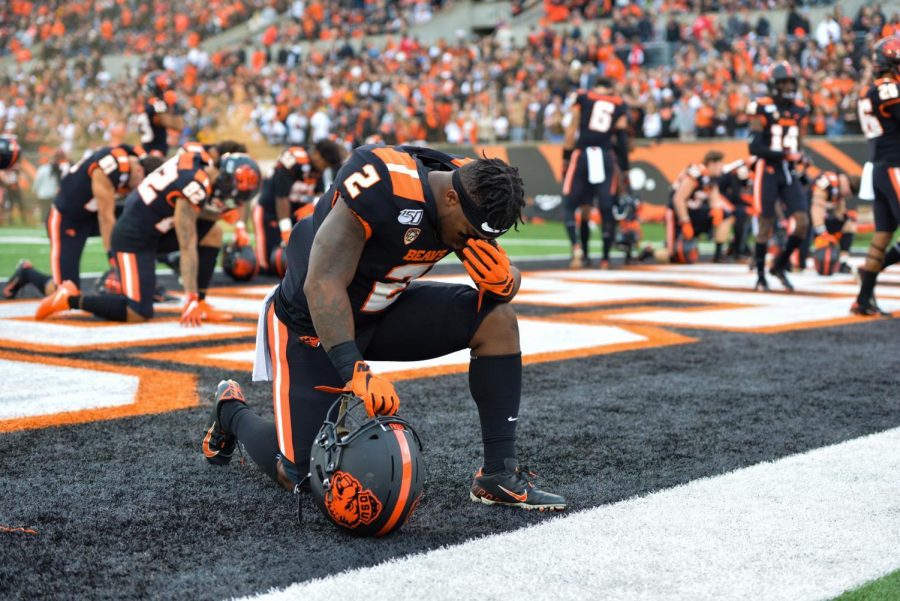 The Oregon State Beaver Football team, 2-4, 1-2 in conference, is scheduled to kickoff at 11:30 a.m. against California, 4-2 and 1-2 in conference, at California Memorial Stadium in Berkeley, California. After a rough outing last week against Utah where the Beavers lost by 45 points, there are multiple things to watch for.

Can Isaiah Hodgins continue his form?

The Oregon State junior wide receiver has had a career best start to the 2019 season. Through six games, Hodgins has almost doubled his touchdown total from last season, and is just eight receptions short of his previous mark.

He currently sits fourth in the nation for total receiving yards and receiving yards per game, is tied for third in receiving touchdowns which is just one short of the top spot, and his 8.5 receptions per game is good for number two in all of FBS college football.

While Hodgins’ production alone might strike fear into the hearts of several opponents, the Golden Bears won’t be easy. Allowing about 214 yards per game through the air, they’ve allowed three passing touchdowns all season. Hodgins, however, said he is up to the task.

“I just got to execute the game plan that the coaches give us and just go out there, do my part,” Hodgins said. “I’ve got to make the plays, make the catches that I have to and get open, and make it easier on the quarterback.”

It has been a rough season for redshirt senior kicker Jordan Choukair. Head coach Jonathan Smith opted to open up the position battle for this week between Choukair and freshman Everett Hayes.

“Obviously when we put them out there we ask them to kick it through the uprights, and so I’m opening it up for competition this week,” Smith said. “We’re still going to attempt some kicks….I expect us to get better.”

Entering the California matchup, Choukair has made two out of six attempts this season. His 33% make rate puts him in a tie for 111th in the nation for field goal percentage. Hayes missed his lone attempt on the season during the game against Utah.

How does the defense start?

Throughout the season, OSU’s defense has allowed points early and often in games. In the first half, they’ve allowed an average of 19.67 points. According to redshirt senior defensive back Shawn Wilson, starting fast is key to the California matchup.

Redshirt sophomore linebacker Avery Roberts will likely play, with coach Smith saying he was “counting on it.” Sophomore running back Jermar Jefferson will play if he is healthy, and Smith made it clear the team has no intentions of using a redshirt on him.

As for senior receiver Trevon Bradford, Smith confirmed the team will use his redshirt, likely playing him in the final four games of the season if he can get healthy.

“I think he’ll play some this year, but at this point probably just four games,” Smith said. “He doesn’t want to play in five games and call it.”

USA Today also notes that redshirt sophomore quarterback Chase Garbers, who was the starter before getting hurt,  is listed as “out indefinitely” due to a shoulder injury. Redshirt junior linebacker Chinedu Udeogu (lower body) and freshman offensive lineman Will Craig (lower body) are both listed as out for the season.