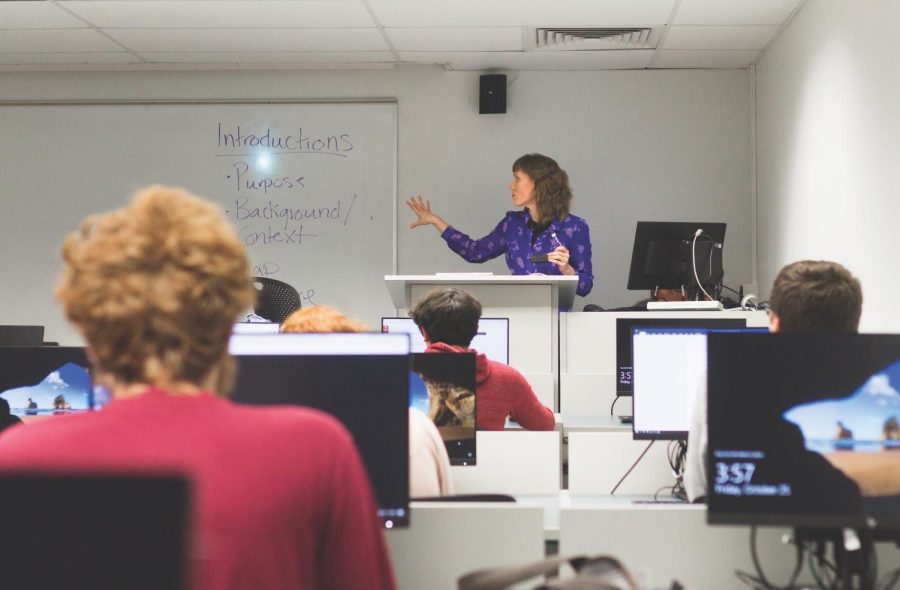 After years of deliberation and planning, Oregon State University’s School of Writing, Literature and Film is working to implement a new major in creative writing.

Keith Scribner, director of the Master of Fine Arts program in creative writing at OSU, has played a key role in the creation of the proposed major. Scribner wrote the category one proposal, which is required to implement a new degree program at a university, and submitted it to the state for approval last spring with the hope it will be accepted in time for fall 2020.

OSU currently offers a degree in English, which focuses primarily on the analysis of texts. In contrast, a degree in creative writing would focus on constructing and producing texts. OSU has a total of 144 declared writing minors to date, including online students.

Currently, no other public university in the state of Oregon offers a Bachelor of Arts in creative writing. Portland State University, however, offers a Bachelor of Fine Arts in the subject.  Surrounding states, including Washington and Idaho, offer programs similar to the proposed degree, and Scribner said he hopes to draw students who are interested in these out-of-state programs to OSU.

In a survey sent out to OSU students who completed a creative writing class, 39% of students said they were “very interested” in majoring in creative writing if it was offered, while 28% said they were “interested” and 18% said “somewhat interested.” Interested students came from a variety of majors, including both liberal arts and science, technology, math and engineering-related fields.

“Based on that, we started to design a curriculum,” Dybek said. “Once you start making a new [program], there’s a lot of different needs that have to be satisfied, so that took a while to negotiate. That was mostly my part of it—overseeing that process.”

In terms of curriculum, the new major would not require the creation of any new classes, but would instead incorporate creative writing classes currently taught at OSU.

Peter Betjemann, director of SWLF, said many of the conversations during the planning stage related to career outcomes for potential students in the major, including the ability to communicate and tell compelling stories.

Betjemann also said the proposed major is complementary in the sense that it can be paired with a number of other programs, including digital communication arts, journalism, speech communication, history, philosophy and STEM fields, to name a few.

Betjemann said he is particularly excited about potential pairings in STEM disciplines, since a creative writing major could provide students in science with the ability to communicate and share information effectively to the public.

Many other universities offering creative writing require one all-encompassing introductory-level class for all three subjects, rather than teaching the topics in separate courses. Scribner said requiring introductory courses in all three concentrations is a significant benefit of OSU’s proposed major, since it can expose students to genres they may not explore otherwise.

According to Betjemann, a key and distinctive element in the implementation of the proposed major is the success of OSU’s MFA program and the strength of its faculty. The MFA program usually accepts 11-14 students out of an applicant pool of roughly 380 per year, making the program one of the most selective in the university.

Betjemann said he hopes to see collaboration between the undergraduate and graduate creative writing students, along with the broader Corvallis literary community, by co-hosting events, attending each other’s reading series and providing feedback on each other’s work.

“The community and the infrastructure—I really want to stress that—are already so strong,” Betjemann said. “I really think there’s an access issue here. We need to give undergraduate students more access to that vitality.”

Betjemann said he believes the program has the potential to produce famous writers, particularly with the resources and faculty already present in SWLF.

“We have faculty who have literally some of the most famous and influential literary agents in the United States. These are people who know the publishing world,” Betjemann said.

Like Betjemann, Scribner said he also hopes to see collaboration and integration between undergraduate creative writing majors and graduates in the MFA program if the proposed degree is implemented.

“One of the things that makes this proposal, and one of the reasons I’m optimistic about it, is because the MFA is such a strong program, and this major seems like a very, very natural—and even obvious—companion to that,” Scribner said.

At the top of his written category one proposal, Scribner included a quote from Steve Jobs: “it is in Apple’s DNA that technology alone is not enough—it’s technology married with liberal arts, married with the humanities, that yields us the results that make our heart sing.”

Scribner said this quote accurately reflects the goal of the proposed degree: for students to become better writers and innovative thinkers.

“That’s the idea—that if you have students who know how to express themselves, know how to write, and have spent four years training and exercising that imaginative, creative side of themselves, they can do anything. It’s limitless,” Scribner said.