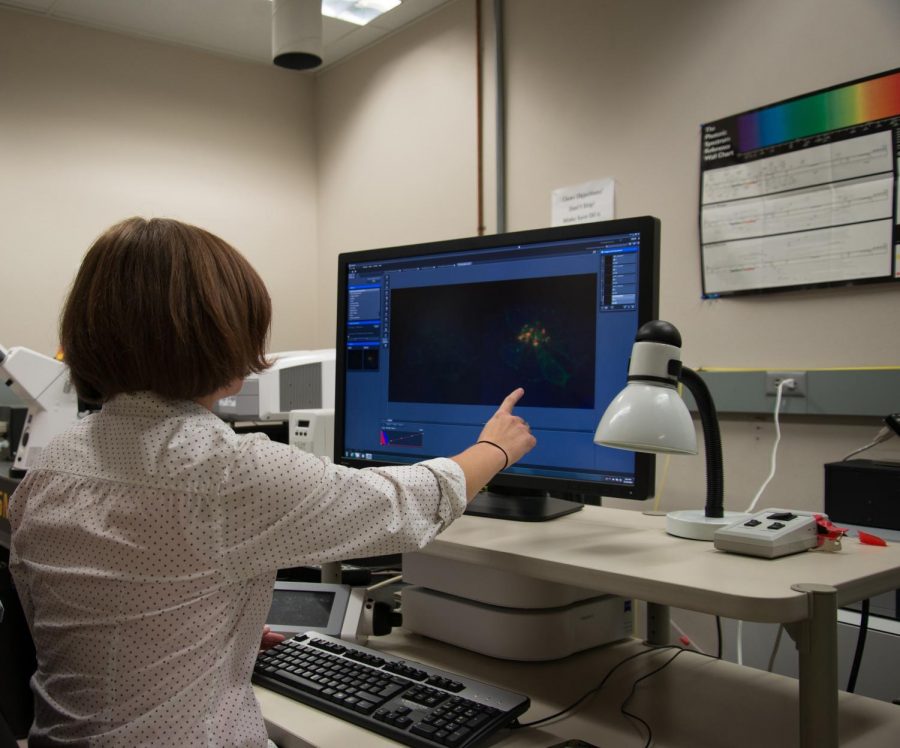 Researchers observe and review data in their testing of proteins' impact on hearing loss at birth.

A group of researchers is investigating the connection between some proteins and deafness. The researchers form part of Oregon State University Johnson Lab, a biochemistry and biophysics lab that conducts research on a family of genes linked to deafness, muscular dystrophy and breast cancer.

According to the National Institute of Deafness and other Communication Disorders, about two to three of every 1,000 children in the United States are born with a detachable level of hearing loss in one or both ears and more than 90% of deaf children are born from hearing parents.

Colin Johnson, Ph.D, principal investigator of the Johnson Lab, moved to OSU in 2011 to research genes linked to medical conditions.

“Hearing is an extremely important sense. Hearing allows for verbal communication and socializing. Loss of hearing results in an impairment in the ability to communicate and interact with others,” Johnson said via email. “The development of treatments for all types of hearing loss provides opportunities for individuals to hear others and communicate through the auditory pathway.”

Among adults aged 70 and older with hearing loss who could benefit from hearing aids, fewer than one in three has ever used them. Even fewer adults aged 20 to 69 have ever used hearing aids that could help them to improve their hearing perception, according to the NIDCD.

“Treatments for deafness are a long time coming, and right now we have cochlear implants that have been known to help, but besides being complex and costly, these implants have a lot of other health-related disadvantages,” Aayushi Manchanda, Ph.D candidate in the Molecular and Cellular Biology Program and part of Johnson Lab, said via email. “The need of the hour is to develop gene therapy related treatments that can reverse this defect, but, that is easier said than done, because deafness can be caused by mutations in thousands of different genes.”

Johnson Lab studies a protein called otoferlin whose mutations have been found in cases of congenital deafness. Otoferlin is known to be crucial in transmitting sound stimulus to the brain for interpretation, and mutations in the gene encoding this protein can cause deafness, Manchanda said via email. The current research at Johnson Lab tries to understand how otoferlin functions in the auditory pathway.

“By gaining knowledge about its mechanism, we can begin to address the changes the mutations are causing and try to develop therapies,” Manchanda said via email.

Josie Bonventre, Ph.D, postdoctoral research associate in the department of Biochemistry & Biophysics at the Johnson Lab said via email that the protein otoferlin has been shown to play an integral role in the hearing process, due to the fact that mutations in the protein lead to profound deafness.

In an email, Johnson said mutations in otoferlin are often observed in people born with congenital deafness.

“Deafness can be caused by a myriad of functional and physiological abnormalities. While we nominally study only the one protein within the entire, complex process we call hearing, our work provides information on other related proteins and functions within the hair cell (the sensory “input” cell), and therefore increases our overall understanding of the physiology governing the system,” Bonventre said via email.

Johnson Lab uses zebrafish, a freshwater fish, as a model organism to understand the function of the gene otoferlin in hearing.

“My research in the lab has primarily been to utilize the larval zebrafish model to study otoferlin in an in vivo model system. By using a reverse genetics tool called ‘morpholinos,’ we are able to temporarily knock down the expression of the protein during development, and observe the consequence of the physiological disruption in the organism and, more specifically, in the hair cells themselves,” said Bonventre via email.

Bonventre said that Johnson Lab is currently using a variety of techniques to measure the behavior of various proteins previously shown to interact with otoferlin.

Johnson Lab is also trying to identify novel proteins associated with otoferlin function in the human body within the hair cells that form part of the sensory receptors of the auditory system.

The ultimate goal of this particular research of the Johnson Lab is to better understand the role otoferlin plays in hair cell physiology and in the process of hearing, Bonventre said via email.

“Otoferlin is part of a larger gene family that also includes dysferlin and myoferlin, genes involved in muscular dystrophy and breast cancer, respectively. A second goal of our research is to understand how these genes function as well, and to find an underlying function that these proteins have in common,” Johnson said via email.

The Johnson Lab will continue studying the connection between otoferlin and deafness to create pathways for future deafness solutions that could improve the quality of life of people suffering from hearing impairment.