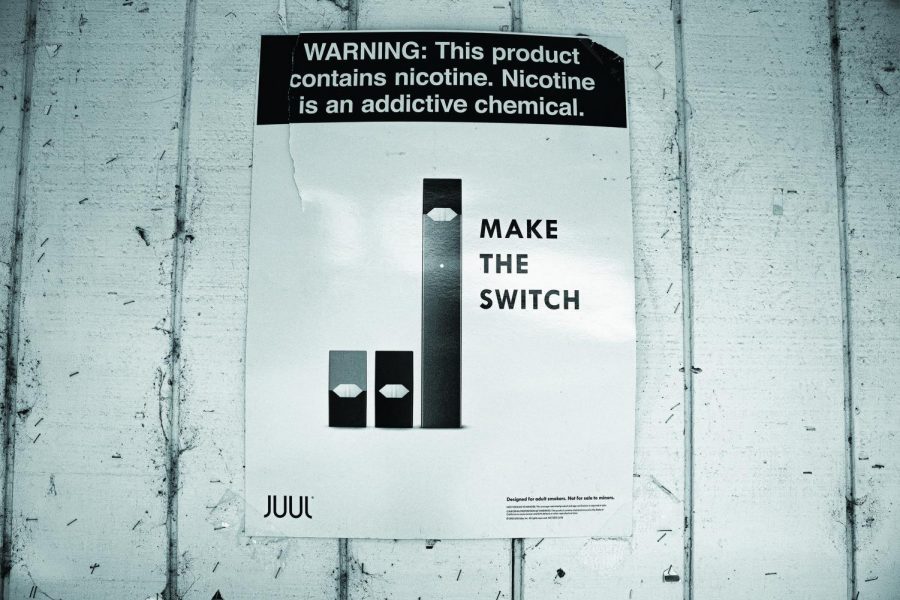 Juul ads are displayed outside of Western Market, which lies on the outskirts of the OSU campus. Regardless of advertising, the rise of underage vaping has increased.

As of Oct. 15, the Centers for Disease Control and Prevention have reported 1,479 lung injury cases associated with the use of e-cigarettes or vaping products from 49 states, the District of Columbia, and one U.S territory. 33 deaths have been reported nationally.

Professor and Extension Specialist in the College of Public Health and Human Sciences, Marc Braverman, said young people have been strongly affected, since young people make up a large proportion of vapers. The CDC reported that as of Oct. 10, 54% of the cases of severe vaping-related lung illness are under 25 years old.

“The process of becoming addicted to nicotine is more powerful in teenagers and young people than in older adults,” Braverman said. “The brain doesn’t reach its full maturity and development until about age 25. While it’s still developing, the neurological changes associated with addiction occur more quickly than after the brain has matured.”

Associate Vice Provost for Student Affairs and Executive Director of Student Health Services, Jenny Haubenreiser, said 80% of those who have become ill are under 35 years of age.

Haubenreiser also said that the OHA has reported that e-cigarettes are the most popular tobacco products used by Oregon’s youth. Usage has increased among Oregon’s 11th graders from 13% in 2017 to 23% in 2019. She said it is very important for students and employees to understand the risks and facts that are associated with vaping.

The CDC is communicating strong recommendations that people stop the use of e-cigarettes or vaping products, particularly those containing THC. People should further refrain from using e-cigarettes with products containing nicotine, and they should not return to cigarette use as a safer alternative. This is particularly important for young adults and those who are pregnant, according to Haubenreiser.

“The vaping industry has been promoting a myth that vaping has been proven to be much safer than cigarettes. The more accurate conclusion would be that we just don’t know what a lot of the risks are yet,” Braverman said.

Associate Professor of Practice in the College of Public Health and Human Sciences, Marion Ceraso, said the acute outbreak we are seeing now is currently being investigated by the CDC.

“There are at least two important concerns about what is happening physiologically when someone vapes,” Ceraso said. “The first is the inhalation of very hot vapor into the lungs—this by itself is an irritant.  The second concern relates to the chemicals and toxic elements present in the vapor that can also damage the lungs.”

According to Braverman, another problem is that e-cigarettes and vaping products are poorly regulated, and different products vary tremendously from one to another. Some products may have certain flavors with particularly toxic ingredients, while products that do not have those flavors or specific ingredients may not be as toxic.

“The big picture is that these [e-cigarettes and vaping products] are basically unregulated, and you don’t know what’s in it when you’re using it. The particular combination a person is using might be highly toxic whereas some other combination might not be as bad,” Braverman said.

Haubenreiser said that the best way to avoid vaping-related harm is to quit and to get help doing so.

“Oregon State University is fully committed to the health of all members of our community. The university’s smoke-free campus policy is now a comprehensive tobacco-free campus policy,” Haubenreiser said via email. “Implementation of this policy in future weeks is an opportune time

to highlight the dangers of vaping, address misconceptions about the safety of vaping, and support all members of the OSU community to quit all forms of tobacco use.”

Ceraso added that given the uncertainty around the exact cause of the current outbreak, the immediate steps taken by the OHA and Governor Kate Brown are very important.  These include calling for all Oregonians to stop vaping and removing all flavored e-cigarettes and vapes from stores.

According to Ceraso, longer-term solutions include strengthening regulations of the manufacturing and sale of e-cigarettes and vapes, increasing oversight of production, increasing prices and thus decreasing demand, more strictly controlling marketing to young people and banning advertising on television.

“Many students are not even aware when they’re vaping nicotine; they think they’re just vaping flavors. We want students to understand that the tobacco companies know it’s the nicotine that keeps people buying their products,” Ceraso said.  “We’ll be hosting outreach events on campus this fall about e-cigarettes and vaping to dispel the misinformation and to let students know that there are resources available for them and people who want to help.”

There are a number of free cessation resources available for students who want to stop vaping.

“This is Quitting” text-based cessation support: Text DITCHJUUL to 88709