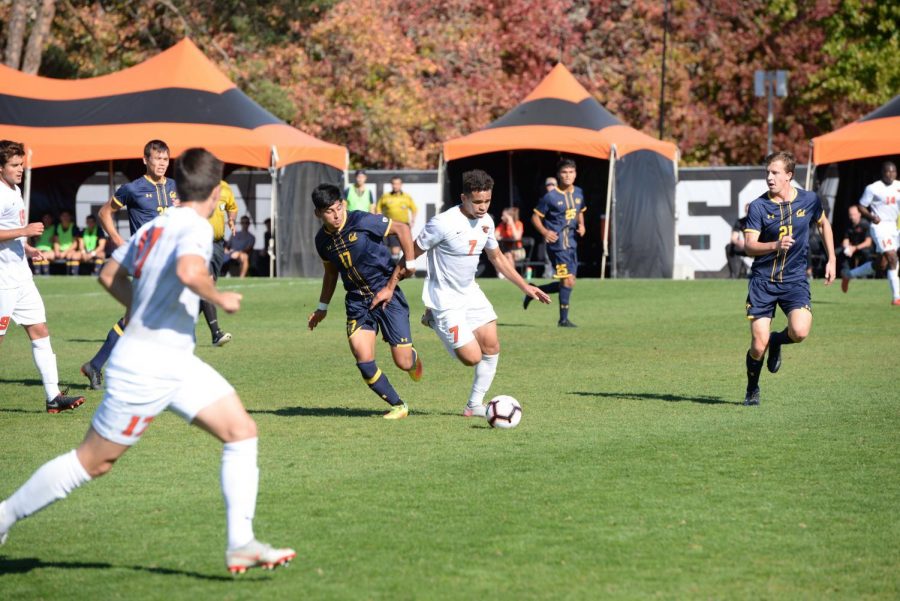 The list of former Beavers who have played or are playing professionally is long, but still growing. While current fall sport student athletes are in the midst of their season, one Beaver-turned-professional is nearing the end of his.

Hassani Dotson, a midfielder and defender,  played on the men’s soccer team at Oregon State University from 2015-2018 before being selected in the second round of the 2019 Major League Soccer Superdraft by Minnesota United Football Club.

“I knew the margins were very small, so one thing could lead to another very quickly but with my track record of being an underdog, I definitely couldn’t foresee all of this happening,” Dotson said about the start of his professional career.

With each MLS club playing 34 regular season games, there was no guarantee that Dotson would get a chance to prove himself. Despite the odds, he made his debut on opening night last March and has proved pivotal in his club’s ascension up the league standings, scoring multiple goals in the process.

In June, around halfway through the season, Dotson got on the scoresheet for the first time as a professional. After a cross was headed away from near the penalty spot, he got his opportunity and scored off a volley from the edge of the box.

As the home crowd went wild and he ran to celebrate with his teammates, Dotson says he didn’t even hear the crowd.

“Honestly when I scored that goal I didn’t even hear anything,” he said. “As soon as I saw the ball go in the net, I was like ‘wait, I just scored,’ and then I paused, and was like ‘wait I just scored my first professional goal, that’s crazy!’”

As MNUFC headed into the final game of the regular season on Oct. 6, Dotson had appeared in 23 out of 33 possible games with 14 starts, playing over 1,300 minutes and scoring four goals, including the winning goal in a game which clinched his team’s playoff position.

“That was probably the best moment of my career,” Dotson said. “I was just trying to make the right play…. It made a little deflection and when I saw the ball hit the net, I was so excited because obviously I realized we could clinch the playoffs if we hold the result.”

While his first professional season has had several shining moments for the MNUFC rookie, Dotson still reminisces about his time as a Beaver. Whether it was beating UCLA during his senior night or playing in the NCAA tournament for the first time in his OSU career, Dotson still admits the thing he misses most about college is the locker room

“The locker room was amazing,” Dotson said. “A bunch of the guys you know, you create such a bond because you see them every single day, you have classes with them, you live with them, and in the professional environment it’s obviously a lot more serious.”

Dotson made 72 appearances with 68 starts in his four seasons at Oregon State. He tallied five goals and three assists while playing nearly 6,000 minutes.

After many special moments in orange and black, Dotson still admits he had offers to go elsewhere before choosing Oregon State. Not only did he have an offer from another university, but there was possibly even a professional contract with Sounders 2 in the United Soccer League.

Despite the interest from other opportunities, OSU still caught his eye for several reasons.

“When I came to visit, the coaches were really nice and attentive,” Dotson said. “Just the team atmosphere seemed really good and I wanted to be close to home but far enough to where I can learn new things on my own and become an adult.”

Hailing from Federal Way, WA., Dotson said he grew up a happy kid.

“In general I’m a pretty happy and energetic person. I’ve been that way since I was born,” he said. “But for me, I want to win everything I do…. My family tells me it’s hard to play family games with them because I’m so competitive.”

His family ties are strong and even his choice of what number to wear as a professional athlete was influenced by his connection to loved ones.

“First reason is obviously the senior players, older players get first choice of the numbers,” Dotson said. “Also I was drafted number 31, and then my girlfriend’s favorite number is 31, and then my dad who passed away was number 31 when he played basketball in high school.”

Aside from his loyalty to family, there’s an obvious loyalty to the game of soccer that becomes evident very quickly when talking to Hassani Dotson. When asked about what they couldn’t live without, some people might talk about their loved ones, or pets perhaps. With Hassani, there was one question that had to be answered first:

“And I can’t choose soccer, right? You know, my life would be kind of pretty stale without soccer,” he said. “Even if I wasn’t playing, I need to watch soccer. I need something with soccer.”

A die-hard fan of Chelsea, who play in the English Premier League and have a predominantly blue logo, Dotson described a time as a child when he decided to commit to his now favorite team. There was a game between Chelsea and Liverpool, who also plays in England. Given that Chelsea ended up winning the game and blue is his favorite color, he decided that would be the club he followed. He’s been a fan ever since.

Beyond his loyalty to the things he cares about most in life, Dotson describes himself as honest, hardworking, and kind-hearted. Ultimately, he says he wants to lift up people’s spirits.

“I want everyone to have a good time,” he said. “When I see someone down, I want to lift their spirits up just because, you know, no one likes being in that type of place.”

Even with his early success as a professional athlete, Dotson still acknowledges there is a moral to his story.

“With social media, especially in sports, things can happen so quickly,” Dotson said. “Just believe in yourself even when others don’t because when you get your opportunity, just try to make the most of it because that’s what you’ve been waiting for.”

With his first season winding down, Dotson’s story goes full circle as the final regular season game for his club was scheduled to take place in Seattle, WA on Sunday, Oct. 6, just over 20 miles from his hometown. For more information regarding how to see Dotson and his club play, you can visit https://www.mlssoccer.com.