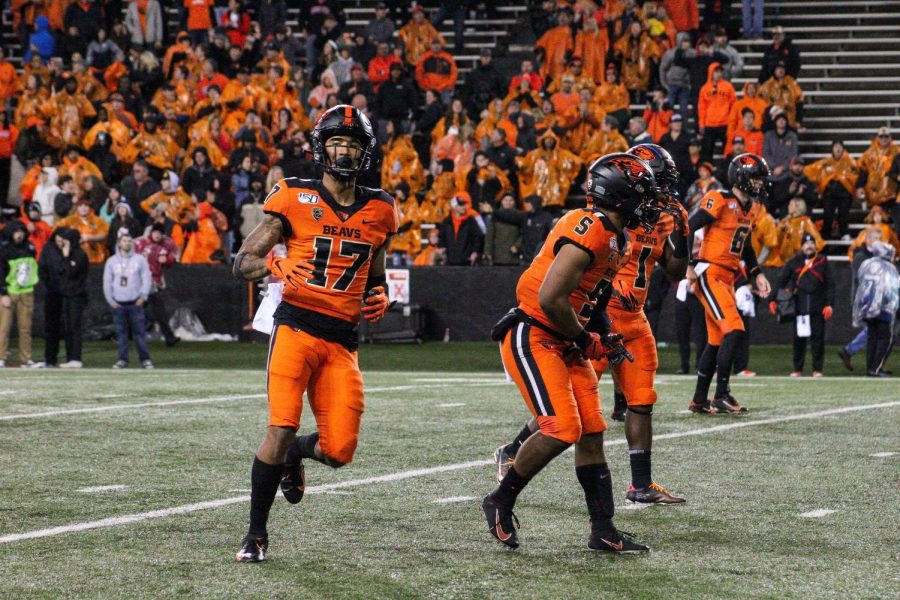 Isaiah Hodgins is having the best season of his Oregon State Football Career.

The junior wide receiver is averaging more receptions, receiving yards, and yards-per-reception than in either of his previous two seasons as a Beaver. His ten touchdowns in seven games this season is more than the seven touchdowns he recorded in his previous 22 appearances.

“He knows the nuances of how to separate, create separation,” wide receivers coach Kefense Hynson said. “He’s got deceptive speed, and he’s got great hands so all those things combine.”

While he is proving to be an asset as a Beaver, Hodgins’ journey to Corvallis started long before he grew into his 6’4 frame. According to both Isaiah and his younger brother Isaac, who is a sophomore defensive lineman at OSU, Isaiah was not a star right out of the gates.

“Actually Isaiah wasn’t that good when we first started playing,” Isaac said. “We were young, we were like 6 years old.”

“My first year playing football I was the worst on the team, and after I just kept working on drills with my dad,” Isaiah said.

Isaiah also said his progression continued through his childhood years playing football, eventually standing out as a high school prospect. Ranked by 247Sports as a four-star prospect, Isaiah had offers from other schools such as Oregon, Washington and Michigan before landing in Corvallis, Ore.

Now at Oregon State, the product of Hodgins’ hard work is showing itself. Going into last week’s bye-week, his touchdown total tied him for first in the nation and his 745 receiving yards put him in eighth.

With his consistent play putting him among the nation’s statistical leaders, head coach Jonathan Smith was quick to recognize the work that has gone into Isaiah’s successes in orange and black.

“One of my favorite things about him being so productive is he’s one of our hardest working guys in practice,” Smith said. “From a leadership role, for one of our best guys to be the guy that’s always out there first, last one off the field, always going, it’s a great example for our team. He deserves it.”

When he’s not busy being one of the nation’s top producing wide receivers, Hodgins said he enjoys down time with his loved ones the most. He said he is not one for partying but enjoys hanging out with his family, friends and wife. His brother describes him as caring, funny and likable.

“He’s got a good heart,” Hynson said. “He’s a good kid, and he’s got a quiet passion to be great that’s not outwardly demonstrative.”

Along with his strong family ties, Hodgins’ faith plays a big role in his life. He describes himself as “God-fearing,” and said he couldn’t live without his faith. Both his Twitter and Instagram biographies have references to Biblical scripture.

With his faith and family helping support him off the field, his on field results are leading to recognition.

Heading into the bye week where the Beavers didn’t have a game, he was leading the fan vote for the Fred Biletnikoff award, an honor given to college football’s best wide receiver. The award is voted on by different college football writers, broadcasters and commentators from all across the country.

Two Beaver football players have won the award in the past, including Mike Hass in 2005 and Brandin Cooks in 2013. Hass spent three seasons in the NFL and Cooks now plays for the Los Angeles Rams in his sixth season as a professional.

“It would mean the world,” Hodgins said of potentially winning the award. “It’s something I prayed about for so long and I feel like it would help not mainly me but the program.”

In this moment, Hodgins is exactly where he envisioned he would be when growing up. He had dreams of playing on the biggest stages against talented defensive backs, and ultimately wants to someday play at the next level.

The Beavers return to action next Saturday, Nov. 2, for a 1:30 p.m. matchup with the Arizona Wildcats in Tucson at Arizona Stadium. Hodgins, however, remains focused on the current moment.

“I just have to sit there and pray on that and wait and see, stay patient. I don’t want to look too far ahead and not enjoy the moment,” Hodgins said. “I feel like the future is bright, but I also feel like the present is bright, so just staying in the moment is big for me.”