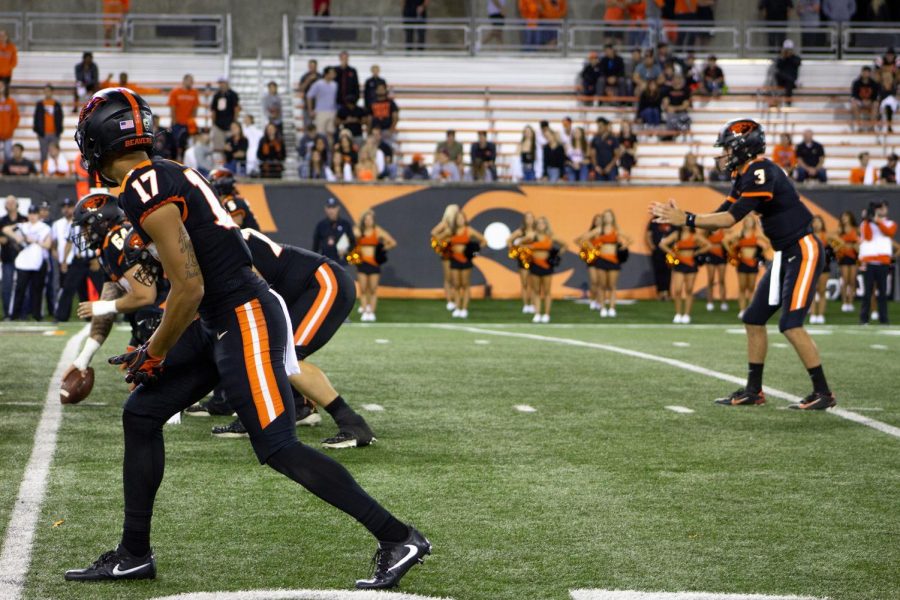 OSU Football junior wide receiver lines up for a play versus Oklahoma State in Reser Stadium on Aug. 30.

Oregon State University’s fall sports, including football, men’s soccer, women’s soccer, and volleyball, home season began with a women’s soccer game on Aug. 18 versus British Columbia and will end with a volleyball game versus Arizona on Nov. 17.

Oregon State Athletics has four main fall sports with a cross over by two winter sports near the end of the season. All four sports are located on campus and provide student tickets with no extra fee to the students

The Oregon State Football team enters the 2019 season with head coach Jonathan Smith in his second year in the position. After a 2-10 record for the 2018 season, the team will be working to secure more than one PAC12 win–as they only had one for the previous season–and to increase their winning percentage.

OSU Football games are held in Reser Stadium. The next home football game will be Saturday, Sept. 28 versus Stanford at 4 p.m. Other games to note for the season include at home versus Utah on Oct. 12 which is homecoming, and at home versus Washington on Nov. 8 at 7:30 p.m. which is Fall Family Weekend.

The OSU Football season will end with the Civil War at Oregon this year on Nov. 30.

The Oregon State Men’s Soccer team enters the 2019 season off a record of 11-6-3 overall in the 2018 season. The team ended with 6-3-1 in conference play. All home games for men’s soccer are held at Paul Lorenz Field on the south edge of campus.

The Oregon State Women’s Soccer team has started their season with the best record in program history, recently capping at a 7-0-0 start. Previously, the team ended the 2018 season with only two wins at a 2-17 season.

Head coach Matt Kagan has worked to turn around the program and has successfully done so thus far in his first year in the position. Games of note for the season include at home versus Stanford on Thursday, Oct. 10 at 7 p.m. and at home versus UCLA on Thursday, Oct. 31 at 7 p.m. Both teams are currently ranked within the top ten national rankings.

The Women’s Soccer season ends at home at Paul Lorenz field in a Civil War match up versus Oregon on Thursday, Nov. 7 at 7 p.m.

The OSU Volleyball team enters the 2019 season after a losing season at 11-21 and with 1-19 in conference play. All volleyball games are held in Gill Coliseum. The team has started with a record of 6-2 and looks to start conference play on Sept. 26 at home versus Oregon at 5:30 p.m.

Games of note for the season are at home versus Stanford on Saturday, Oct. 5 at 6 p.m. and at home versus Washington on Sunday, Nov. 10 at 12 p.m. Both teams are within the top ten national rankings.

The OSU Volleyball team ends their season in a Civil War match up at Oregon on Friday, Nov. 29 at 5 p.m.