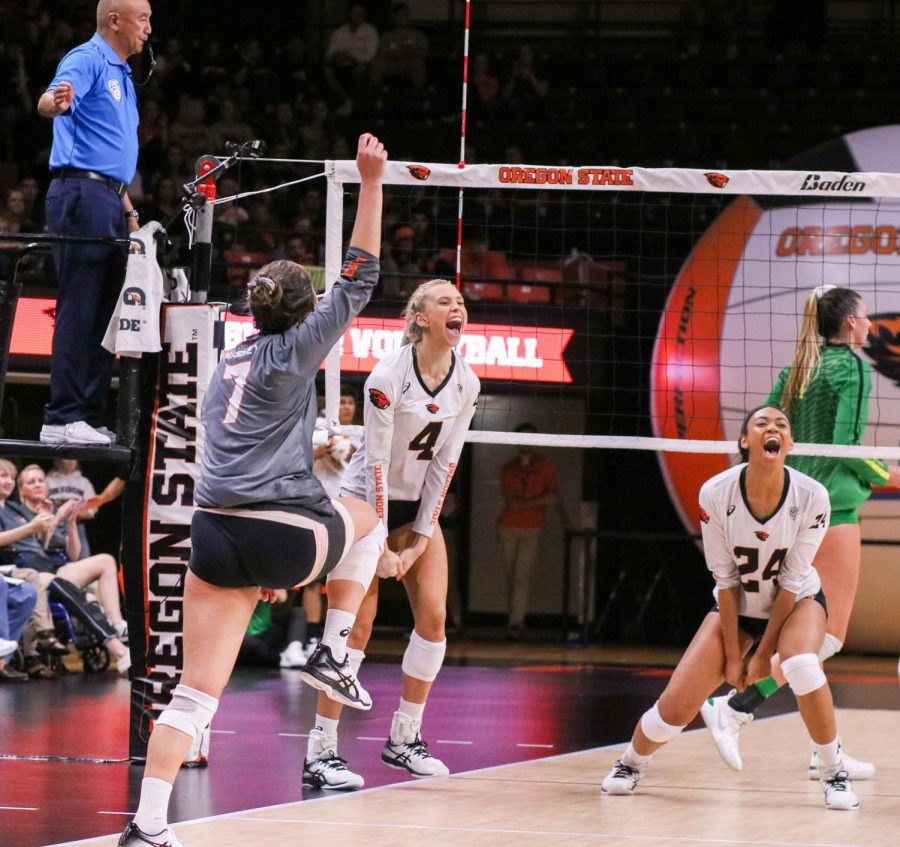 Oregon State Volleyball secured a significant 3-2 upset over rivals in Oregon Volleyball on Thursday, Sept. 26 in Gill Coliseum. Oregon entered the game ranked at #24 nationally with a 4-6 season record while Oregon State entered with a 7-5 season record.

Following the win versus Oregon, the Beaver Volleyball team bested Colorado in a match of 3-1 on Friday, Sept. 27. The win gave Oregon State an 8-5 record for the season with a 2-0 start in conference play.

The upset versus Oregon was the Beavers’ first win in volleyball over the Ducks since 2014. Both it and the win over Colorado give sparks of hope and vision for the season, but leave

In the past, OSU Volleyball has started seasons with a strong beginning, but have faltered as conference play begins. In the past three seasons, the best record to date was in 2017 at a 21-12 season and a 11-9 conference record. However, even just in 2018, the team faced a losing record with a 11-21 season and a conference

The strong start in conference play for the 2019 season gives hope. It gives the opportunity for the program to take steps forward from their losing season in 2018. But their success lies squarely on continuing to capitalize on the momentum to continue with a

The program has a pattern of falling into a streak of wins or losses, generally with their starts to conference play. Starting off strong versus Oregon and Colorado gives the team an opportunity to start a positive streak of wins.

Additionally, playing gritty in matches such as the full five-match competition versus Oregon shows the team has the capability to continue winning, even in the face of a ranked opponent. However, the Beavers have one more weekend in Corvallis before hitting the road.

Playing on the road will prove a test in building the momentum and creating a winning streak for the OSU Volleyball team. Starting conference play with four wins at home is the perfect opportunity for the Beavers to build mental and physical strength for

The Oregon State Volleyball team will face California on Friday, Oct. 4 and Stanford on Saturday, Oct. 5 in Gill Coliseum to continue their conference play and work to maintain hopes for a successful season.