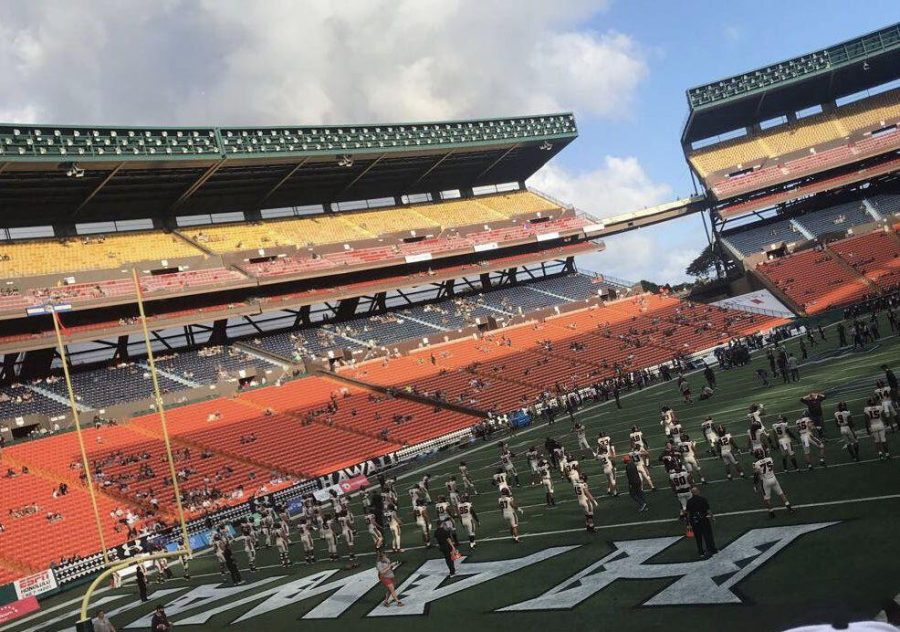 Oregon State Football players warm up prior to their matchup versus the Hawaii Rainbow Warriors on September 7 at Aloha Stadium in Honolulu, Oahu.

The Oregon State Beavers Football team faced the University of Hawaii Rainbow Warriors last Saturday, September 7. The two teams met as part of a home and away contract that will be fulfilled with a game in Corvallis in 2021.

The game began with a strong offensive statement by the Beavers, including 282 total yards for the first half with 177 yards rushing and 105 yards passing. The Beavers finished the half with a lead of one touchdown but the Rainbow Warriors closed the gap from a 14 point spread to seven points at the end of the second quarter.

The Beavers relied more on the dual-threat of senior running back Artavis Pierce and sophomore running back Jermar Jefferson than on redshirt senior quarterback Jake Luton connecting with his receivers. Pierce rushed for two of the Beavers touchdowns while Jefferson rushed for one. The fourth touchdown of the half was by Luton connecting with junior wide receiver Isaiah Hodgins.

In contrast, the Rainbow Warriors found more yardage with passing over rushing. Hawaii’s offense ended the half with 273 yards including 44 yards rushing and 229 yards passing. Redshirt junior quarterback Cole McDonald connected with senior wide receiver JoJo Ward for all three of the Rainbow Warriors touchdowns for the first half.

With a tie game going into the fourth, both teams grappled with drives down the field to gain the lead. With three missed field goals, redshirt senior kicker Ryan Meskell was able to complete a 28-yard field goal in the fourth quarter with just over two minutes left in the game. The Beavers failed to answer, leaving the final score as 31-28 in favor of Hawaii.

Beyond the struggles on the field, the Beavers additionally struggled with several injuries on-field during the game. In the last week since the game, three athletes have been confirmed with injuries giving varying lengths of time off the field.

Redshirt sophomore outside linebacker Addison Gumbs was injured in the game and has been declared out for the season due to a torn ACL. Gumbs’s injury is on the knee opposite to his previous knee issues. Gumbs was a transfer from Nebraska last season and redshirted to maintain eligibility.

Sophomore outside linebacker Matthew Tago has been declared out for an indefinite period of time due to a knee injury that has not bee specified any further. Tago played 11 games in his freshman season with the Beavers and started in one versus Stanford. Tago tallied 19 tackles for the season, including two games with four tackles versus Washington State and Oregon.

Redshirt junior offensive lineman Nathan Eldrige suffered an ankle injury and has been declared as a day to day evaluation of when he will be healthy to play. Eldridge transferred from Arizona where he played under Jim Michalczik. Michalczik was an assistant coach at Arizona and has since joined the Oregon State Football coaching staff as a run game coordinator, offensive line coordinator, and associate head coach.

Two Beavers also face suspension from team staff for the first half of the next football game due to fighting at the game versus Hawaii.

Redshirt sophomore defensive back Kaleb Hayes was suspended for fighting with a member of the Rainbow Warriors’ offense during the third quarter. Hayes continued to attempt to fight the player, eventually bringing the animosity to the Beaver sideline and struggling with his own teammates and coaches.

Senior offensive lineman Gus Lavaka was also suspended for fighting with a member of the Rainbow Warriors. Lavaka began throwing punches near the Hawaii sideline at the close of the game and had to be restrained by players, coaching staff, and officials who all worked to attempt in deescalating the conflict.

Both Lavaka and Hayes will be suspended for the first half of the game on Saturday, September 15 where the Beavers will face the Cal Poly Mustangs at 1:15 p.m. in Reser Stadium. The Beavers will be faced with a continual decision on injuries and the suspensions in terms of setting a starting line up and strategizing for the game.