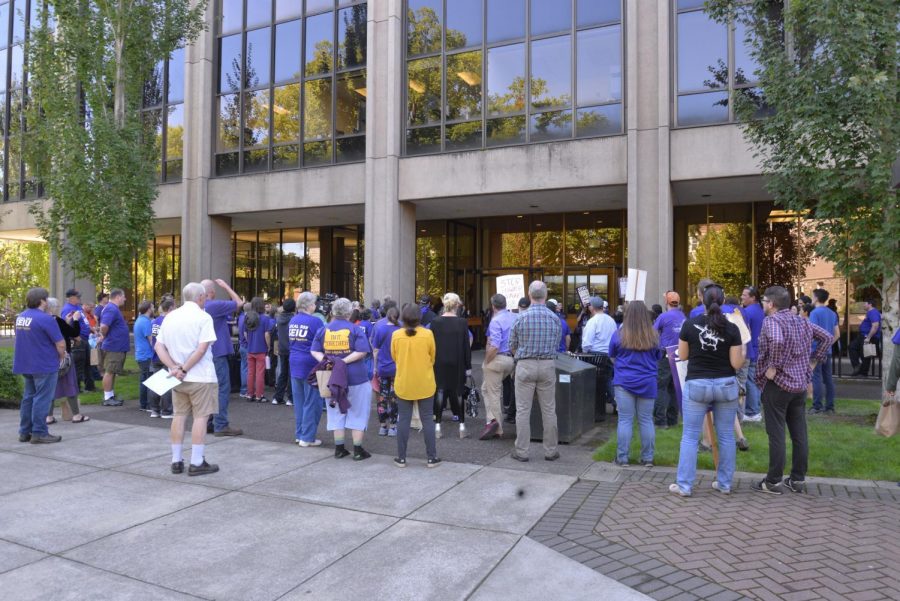 The classified employee strike scheduled for Sept. 30 was averted after a final bargaining session running from Friday into Saturday ended in a tentative agreement between the two parties.

After bargaining through Friday night, SEIU 503, the classified employees’ union, reached an agreement with the administration of Oregon’s public universities. The agreed-upon contract’s terms will be implemented in November if the SEIU’s October vote to ratify the contract settlement passes. The agreement was reached despite tension between the two groups and the union feeling disregarded at points.

The conflict was primarily centered around wage increases for the new two-year contract. Classified university employees—who work in services like University Housing and Dining, the Financial Aid office, the Office of the Registrar and building maintenance—had expressed concerns that the 2% cost of living increase in 2019 and 2.25% in 2020 offered by university administrators was not enough of a change.

The agreement from the final bargaining session provides for a 3% cost of living increase for classified workers in 2019 and another 2.1% increase in 2020 as well as a full step wage increase of 4.75% in each year of the new contract. Steps are levels within a salary range, which classified employees are placed into based on experience levels and length of time they have worked in their position. The agreement also includes a bonus of 2.5% yearly to all classified workers who have been at the university for over five years and reached the top of their salary and a promise to keep all wages above the Portland minimum wage. Finally, the agreement will move 15 classified positions to higher wages and 48 hours of paid time over the course of the agreement to be used in events like campus closures, according to an email sent out to the student body on Sept. 28.

Although the two groups are now in agreement, leading up to what was intended to be a final planned bargaining session on Tuesday, SEIU members felt ignored and disrespected, leading them to skip the session and reiterate their intent to strike.

“We let management know that we stand ready to bargain in good faith,” said SEIU 503 Executive Director Melissa Unger in a press release from Tuesday, Sept. 24.  “However, Sept. 23rd’s negotiations were not moving us closer together and made us feel that management has no desire to offer a fair contract to the 4,500 people who make Oregon’s public universities work. If we don’t see a drastic change, our members are prepared to strike Monday morning.”

According to Steve Clark, vice president of University Relations and Marketing, SEIU did not show up to the arranged negotiation session set for Sept. 24. SEIU said this was because they had not heard any offers from the administration that they considered to be reasonable, and they felt their scheduling requests had been overlooked.

“This last Monday we bargained until 11:00 p.m. They consistently gave us offers that reflected that they were not taking us seriously or listening to what we considered core demands. So we told them at that Monday night that we were not going to meet them until they gave us a serious offer,” Gloria O’Brien, the bargaining team representative for SEIU said via email on Sept. 27. “Two months ago, we gave them our team’s availability for the summer. There were only six days when we could not meet them. They turned around and only offered us three bargaining sessions totaling six days. They have professionals to spin their story. I just work in a greenhouse.”

According to O’Brien, a strike could have made it difficult for students to get help with financial aid or changing class schedules, as both the Office of the Registrar and the Financial Aid office employ classified workers. Custodial and maintenance workers are also classified workers, which could have resulted in clutter around campus in the event of a strike.

“We saw the administration giving themselves a 3% raise back in January, and they make a lot of money, so 3% of their income is a substantial amount,” O’Brien said. “Nobody ever said that would be hurting tuition, but when we asked them to make up for what we had lost over the years they said it would affect tuition. That giving us a decent living would increase student tuition.”

According to the press release from the Sept. 23 bargaining session, Oregon’s public universities have the resources to offer a fair contract and keep tuition low. Workers were concerned that the universities, instead, invest in things like extremely high executive salaries and executive bloat. The press release also states that half of the workers who are set to strike earn less than $40,000 per year, hundreds make less than $25,000 per year, and one in six qualify for SNAP (food stamps) for a family of four. The presidents of some of the largest universities in Oregon make around $500,000 each year, with multiple university coaches making around $1 million each year.

According to Clark, the university is currently balancing many funding priorities and is attempting to budget in a reasonable manner.

“We respect our classified employees’ labor rights and value the many contributions that classified colleagues make to serve our students and the university’s mission,” Clark said via email. “We also must prudently manage the financial resources of the university and its many priority initiatives.”

With the new two-year contract now agreed to and the threat of a strike gone, Clark said the university is pleased with the result.

“We are very pleased that an agreement was reached resulting in a new contract with the university’s classified workers,” Clark said via email. “We look forward to collaborating with our classified colleagues and all OSU employees to achieve an outstanding academic year.”