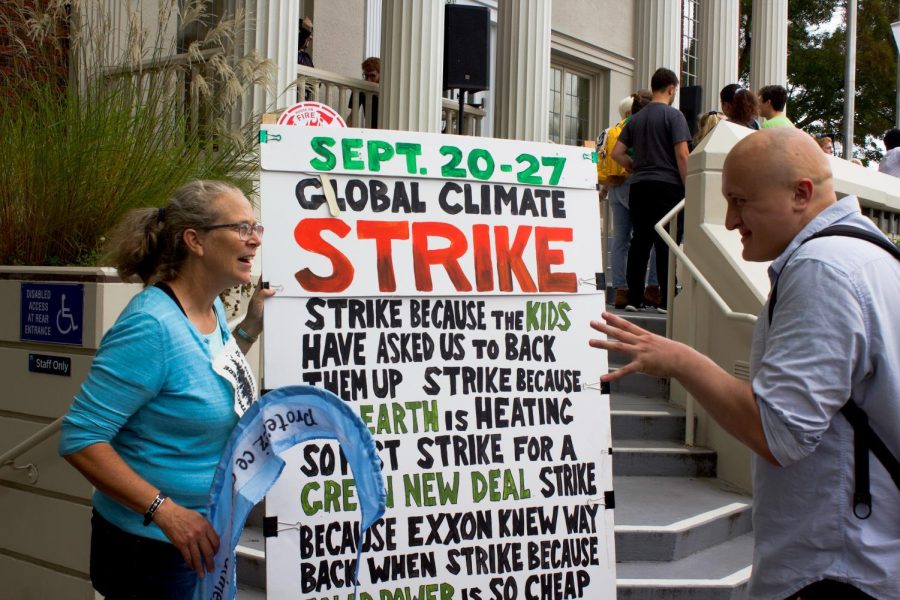 Corvallis High School teacher and Green Club advisor Julie Williams (left) speaks to another protester at a student-led march to City Hall as part of the global Youth Climate Strike back in September.

The high school student activists left their classes as part of the larger Youth Climate Strike, with participants numbering in the millions worldwide.

Mayor Biff Traber responded to the Corvallis crowd in a speech in front of City Hall.

“I would like to get the city of Corvallis to 100 percent renewable power,” Traber said in his public address. “We need you to push on state legislature and keep coming back for what the community thinks is important.”

Julie Williams, a Corvallis High School teacher for the Sustainability in Society class, helped put together the march. She believes the event—attended by hundreds—was a “raging success” that brought a sense of communication and awareness to the city.

“After teaching students this topic for so long, I felt like I couldn’t look students in the eye anymore,” Williams said.

OSU President Ed Ray released a statement via email supporting the student activists and highlighting the university’s own efforts toward reducing climate change.

“In 2017 alone, the university’s greenhouse gas emissions decreased 6.25%. Over the past several years, we have implemented numerous measures to promote reduced single-occupancy vehicle trips to campus,” Ray said in the email. “Our Board of Trustees has directed OSU to not invest university cash assets in fossil fuel-related securities. Our residential dining centers and catering departments are leaders in utilizing locally sourced foods and conserving waste. Meanwhile, our plans for the expansion of OSU-Cascades call for a net zero campus as it targets using only as much energy as the campus produces.”

CCCA Steering Committee member Claire Couch said the group was at the march to support CHS students, who orchestrated the event on their own.

The CCAA is hosting a climate rally on September 27 starting at the Memorial Union and ending at the waterfront. There will be theatrical performances, music and speeches, including from Bill Ripple, an ecology professor at OSU.

“July 2019 was the hottest month on the planet so far,” Ripple said to the crowd at City Hall. “But September 2019 will be the most political heat the planet has ever seen.”

For more information and a full schedule of events, visit the Corvallis Climate Action Alliance website .