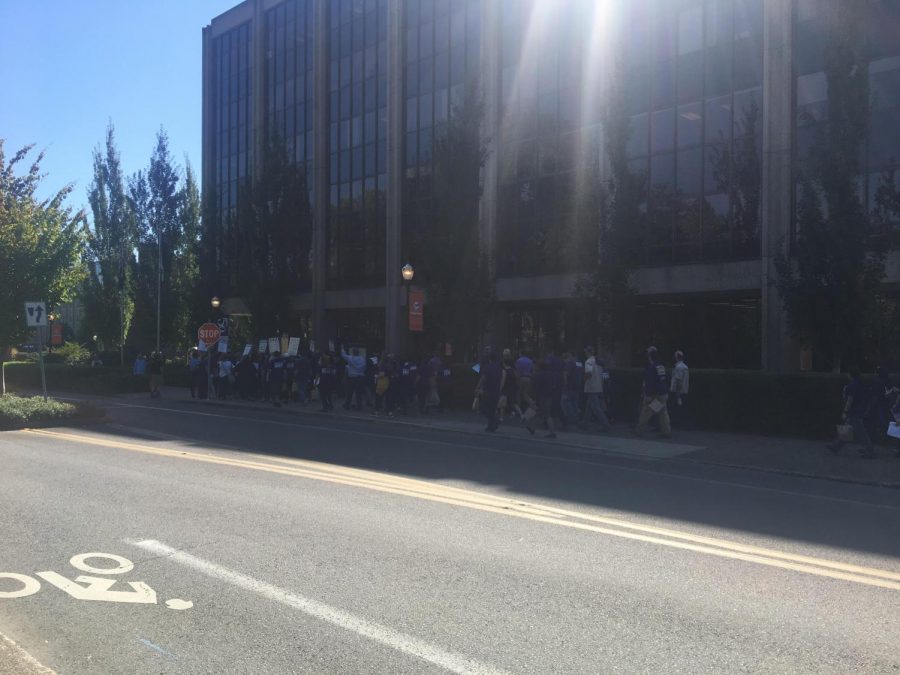 Monday and Tuesday may be the last chance for classified employees at Oregon’s public universities and university administrators to reach an agreement and prevent a strike.

After 95% of Oregon’s branch of the Service Employees International Union, SEIU 503, voted to authorize the action Wednesday, the union bargaining team notified administrators of their intent to strike at 7 a.m. Monday, Sept. 30 if the two parties cannot come to an agreement. However, this does not mean a strike will take place. A bargaining session to attempt to resolve the dispute with a mediator is scheduled for next week. Previously, on Sept. 12, SEIU 503 members and supporters held a rally to show their displeasure with how administrators are handling their cost-of-living adjustments.

The conflict between the union and university administrators at Oregon’s seven public universities—which has been ongoing since January—is centered around wage increases for the new two-year contract. Classified university employees feel management’s offer of a 2% cost of living increase in 2019 and again in 2020 is not enough. The union has countered with a requested 3% cost of living increase in 2019 and 3.25% in 2020.

SEIU Local 503 is also attempting to add a new top step to the salary scale and eliminate the bottom salary scale step, according to Tanner Thompson, a property specialist for the McNary Dining Center and a union member involved in organizing the potential strike.

Steps are levels within a salary range, which classified employees are placed into based on experience and length of time in the position. Under the administration’s current offer, classified staff would receive a 4.75% step increase each year. Those who have topped out at their highest possible salary step would receive a one-time $750 bonus this November, but not a higher salary level.

The 4,500 non-faculty classified staff members represented by the union provide OSU services from building maintenance to IT support, which could go unfulfilled if the strike occurs. According to Gloria O’Brien, who serves as the union’s bargaining team representative and a research facilitator on campus, the OSU Financial Aid Office and the Office of the Registrar both employ classified staff who would not be at work if a strike takes place. Student Health Services also has classified employees in nurse practitioner and receptionist positions that would participate in the strike. Other major programs on campus that rely on classified workers include University Housing and Dining Services and Facilities Services.

“One of the main reasons we are considering a strike is because the cost of living keeps going up but the step system at OSU hasn’t been revised in over a decade,” O’Brien said. “This isn’t something we really want to do, and we hope that we’re here for students when they come back to school.”

For its part, the group of universities believes it has provided a fair and prudent bargaining offer based on what funds are available, said OSU’s Vice President for University Relations and Marketing Steve Clark. Each of the seven universities can prioritize expenditures within their budgets, of which classified employees are one along with faculty salaries, student success programs and others.

Earlier this year the Oregon Legislature authorized an additional $100 million to the public university system, much of which went to reducing the impact of tuition increases, PERS and insurance benefits, according to Clark.

Clark said OSU is taking action to work around a strike, but are looking to see what happens at Monday’s bargaining session first.

“It would be premature to imagine what could happen in the event of a strike because we hope to settle on a decision on the 23rd,” Clark said. “We are preparing to accommodate a strike but we are not certain it’s going to happen yet.”

The union is also planning for the possibility that an agreement will not be reached on Monday or Tuesday, Thompson said. SEIU Local 503 has communicated with the faculty union and the graduate student union. If a strike takes place, some classes may be held off campus or the strike will be used as an educational opportunity. A food drive will also be organized for those impacted by the strike as well as anyone else who experiences food insecurity.

“The strike would send a message to the administrators that they need us,” Thompson said. “Going on strike is not something that any of us want to do, it’s something we feel we have been pushed to do.”

If there is a way forward without a strike, the union will take it, Thompson said.

“We have to be able to support our families and make rent, but the administration does not seem to understand that that is the level of insecurity that they are proposing for us,” Thompson said.

Classified staff such as Thompson say they enjoy working with students, and have attempted to structure their efforts to impact students as little as possible.

“In general, I don’t think it is going to be a huge inconvenience for the students,” Thompson said. “We’re trying to structure it to have the largest impact on administration.”