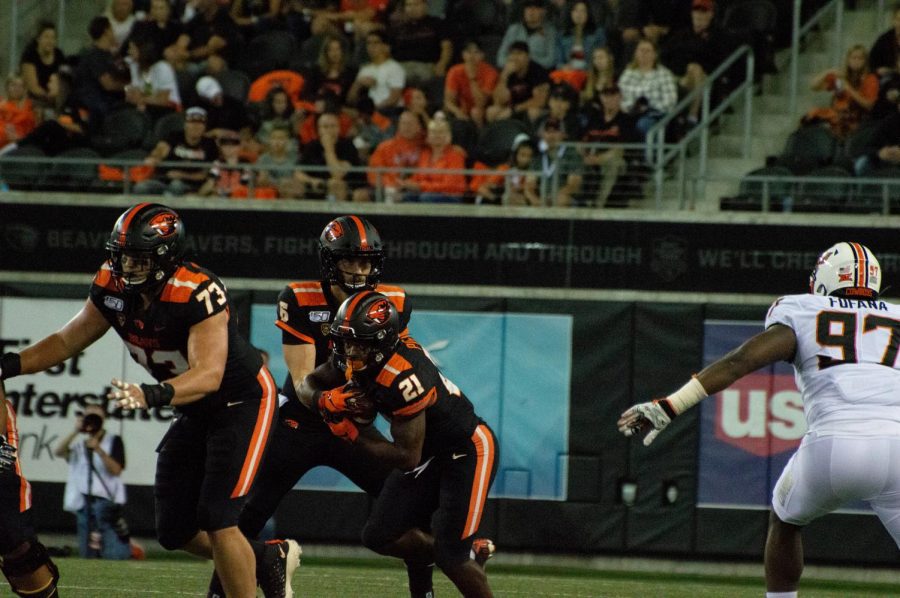 On the opening night of football for both teams in front of an official attendance of 31,681 at Reser Stadium, the Beavers fell to the Oklahoma State Cowboys by a final score of 52-36.

Both teams struggled all night to keep the other out of the endzone. Three consecutive three-and-outs forced by the Oklahoma State defense lead to a 21-0 Cowboys run that created an early hole too steep for the Beavers to climb out of, despite picking up their offensive production again in the second half.

The Cowboys rushing attack looked prolific all night, with running back Chuba Hubbard proving himself a difference-maker throughout the game. The redshirt sophomore gashed the Beavers defense on route to 221 yards and three touchdowns on just 26 carries, with freshman quarterback Spencer Sanders adding 109 rushing yards of his own on 13 carries. As a team, Oklahoma State ran for 352 yards and four touchdowns on 52 carries.

Containing the run was an issue all last year for the Beavers, and the story out of fall camp this year for the Beavers was how they improved on run defense. While failing to take a step in the right direction against the Cowboys, coach Jonathan Smith pointed to game one rust contributing to the issue, saying “you’re not live tackling throughout camp. You gotta be great at it and we weren’t tonight”

Oregon State had a solid game rushing in their own right against the Cowboys, with sophomore back Jermar Jefferson leading the way with 87 yards on 16 carries. Running backs Artavis Pierce and B.J. Baylor came in throughout the night to provide Jefferson with a break. The two backs combined for 12 carries and 66 yards and looked to be a vital part of the offense.

Quarterbacks on both sides of the ball played well for most of the night, with Cowboys freshman Spencer Sanders stealing the show down the stretch. After a slow start that included just three passes for 15 yards by the end of the first quarter, Sanders found his rhythm to end the night 19/24, 203 yards and three passing touchdowns, including two going to the team’s star receiver Tylan Wallace. Sanders was in a quarterback battle all camp with senior transfer Dru Brown before officially being named the starter on the day of the game.

Jake Luton of Oregon State also had a solid game against the Cowboys. Despite a rough stretch during the second quarter when the offense stalled on three consecutive possessions, Luton ended the night going 23/42, 251 yards, and three touchdowns. Luton’s accuracy looked inconsistent all night, but he did enough to let receiver Isaiah Hodgins shine as the Beavers’ most prolific player of the night. The junior receiver ended the game with nine catches for 170 yards and two touchdowns, an individual performance that earned the respect of his head coach, who said after the game “He’s a factor. He definitely needs to see some balls, and he earns it”.

The main theme of the night was offensive production, as both teams struggled to force the other off the field. Oklahoma State had particular success on offense, especially on third down. The Cowboys ended the night converting 10/13 on third down and weren’t forced to punt until 3:24 left in the third quarter. That said, there were still a few defensive highlights for both sides. Other than the three consecutive three-and-outs, the Cowboys defense forced starting quarterback Jake Luton into completing just under 55% of his passes and batted down at least three passes that I counted at the line of scrimmage. The Beavers defense, on the other hand, was effective all night in getting into the backfield, getting nine tackles for loss, led by Shawn Wilson who ended the game with 1.5.

For the Beavers, they’ll travel to Hawaii for their second game of the season, while Oklahoma State will travel back to Stillwater, Oklahoma to take on McNeese for their home opener. The Beavers will be back in Corvallis on September 14th for their game against Cal Poly.