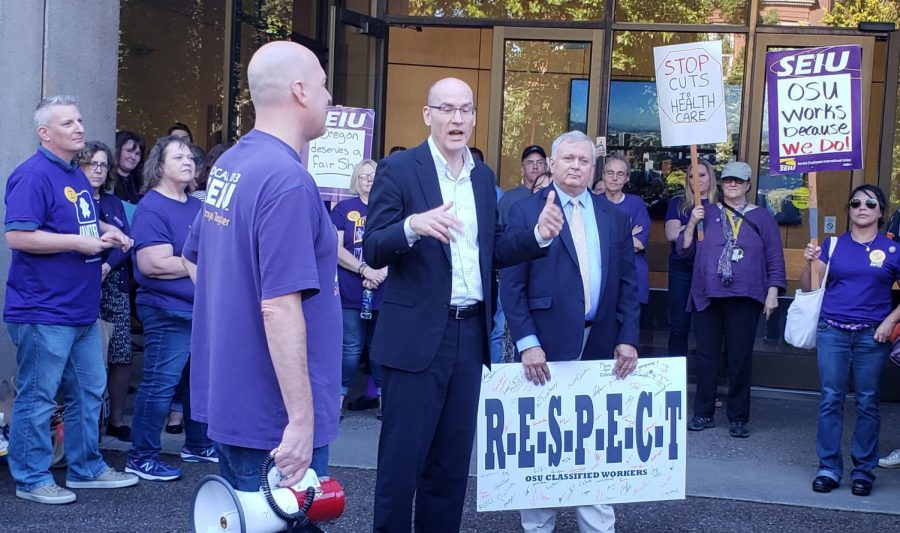 The classified employee strike at planned for Monday, Sept. 30 at all Oregon public universities has been called off after an agreement regarding worker wages, benefits and classifications.

The proposed new contract for the classified employees includes a 3% cost of living adjustment for all employees, retroactively going into effect July 1, 2019, meaning staff will be compensated for wages they would have earned between then and now with the COLA. It also includes a 2.1% COLA, to go into effect July 1, 2020, according to an email sent out by Oregon State University. Other agreements include moving certain job classifications to higher salary ranges, adding full step wage increases and paid time off to be used during university closures and delays due to hazardous conditions.

These COLAs come after last week administration offered a 2% COLA in 2019 and a further 2% in 2020, and the union countered with a requsted 3% COLA of 3% for 2019 and then 3.25% in 2020. This new contract agreement was reached after bargaining teams worked from Friday morning through Saturday morning to reach a last-minute agreement.

According to the unviersity’s email, specific agreements include full step wage increases of 4.75% for each coming year of the new contract, moving 15 job classifications up to higher salary ranges and a longevity premium of 2.5% for classified staff who have been at the university for at least five years and have been at the top of their salary range for at least one year. Additionally, the university says it has committed to keeping entry-level classified staff above the Portland metro area public universities’ minimum wages. Classified employees are also to receive 48 hours of paid time off to be used during campus closures and delays due to hazardous conditions or inclement weather.

All other benefits are to stay as they are in the current contract.

Although Monday’s strike has been averted, union members must still vote to ratify the proposed new contract in October.