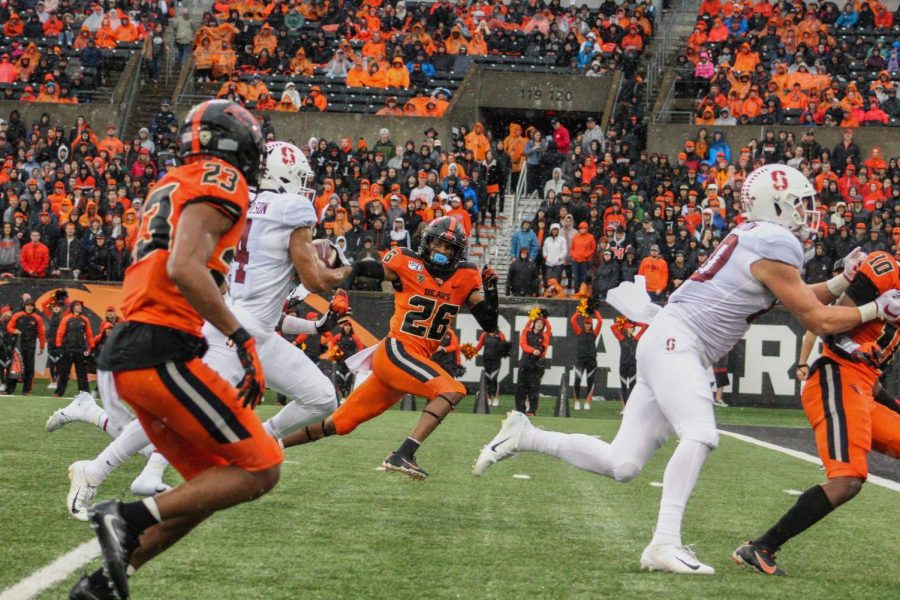 The Oregon State Football team lost to the Stanford Cardinals by a score of 31-28 at Reser Stadium on Saturday night, Sept. 28. With the loss, the Beavers move to 1-3 on the season.

Stanford appeared on the scoreboard first with a 26-yard touchdown pass from junior quarterback Davis Mills to sophomore wide receiver Michael Wilson. Their score capped off the end of the first quarter.

Despite a weak start to the first quarter with 33 yards of offence, the Beavers looked to improve. A strong start to a drive in the second quarter was characterized with connections between redshirt senior quarterback Jake Luton and junior wide receiver Isaiah Hodgins, OSU’s offense could not capitalize. A blocked field goal by Stanford senior cornerback Obi Eboh left the Beavers scorelesss.

“Just shooting ourselves in the foot and not executing,” said OSU junior wide receiver Isaiah Hodgins about the first half. “Dumb penalties, holding, false starts, whatever it was. Just not executing on certain runs and passes.”

Stanford ended the half with 194 offensive yards with 12 yards from rushing and 182 yards from passing and a lead of 14-0.

By halftime, OSU’s Hodgins gained 73 receiving yards and led the team, accounting for nearly half of OSU’s offensive output of 153 yards for the first half.

“I think we’ve got a receiver that’s as good as anybody,” said OSU head coach Johnathan Smith about Hodgins. “That guy just shows up all the time.”

After the Cardinals’ third touchdown of the day, the Beavers’ offense responded with their first successful drive of the game in the third quarter.

OSU took control of the ball with over 14 minutes and drove into Stanford territory. Senior running back Artavis Pierce broke free for a 43-yard touchdown run and cut the Stanford lead to one touchdown with a score of 21-7.

“Everyday I plan to do my best for the game. I knew I was going to have a load on me today, and I feel like I handled it well,” Pierce said about his performance.

While initially appearing to stop the Cardinal offense and force a 46-yard field goal, OSU got called for a “leveraging another player” penalty when an OSU defender hopped over the Cardinal center.

With the penalty moving the ball 15 yards closer to the endzone and a roughing the passer on the following play, Stanford had a first down on the eight-yard line. On the ensuing play, a “Philly special” of a trick play was converted and Stanford extended the lead to 14. Stanford’s wide receiver Parkinson connected with quarterback Mills in the endzone for an unexpected pass play that resulted in a touchdown.

Despite the Stanford score, the Beavers once again responded. In just a minute and a half, the Beavers drove 75 yards and scored on a touchdown run by redshirt sophomore running back B.J. Baylor. On the ensuing kickoff, it appeared as though OSU had regained possession of a fumble when Baylor came out of a pile with the football.

While they didn’t regain possession, the Beaver defense forced a punt – which was followed by a 10-play, 77 yard touchdown drive led by another long rush by Pierce that ended on the one-yard line. The following play, he punched it in for six and the game was tied at 28 all with just under two minutes left in the game.

After the ensuing kickoff was returned to the 50-yard line, Stanford ran down the clock as they neared field goal position. With just one second left in the game, Cardinal senior kicker Jet Toner made the field goal, giving his team a three-point lead.

The Beavers were unable to return the final kickoff for a score, and the game ended with a final score of Stanford Cardinals at 31 and the Oregon State Beavers at 28.

Oregon State Football continues conference play next week at UCLA, with kickoff scheduled for 6 p.m. They will return to Reser Stadium on Saturday, Oct. 12 for a matchup with the Utah Utes.