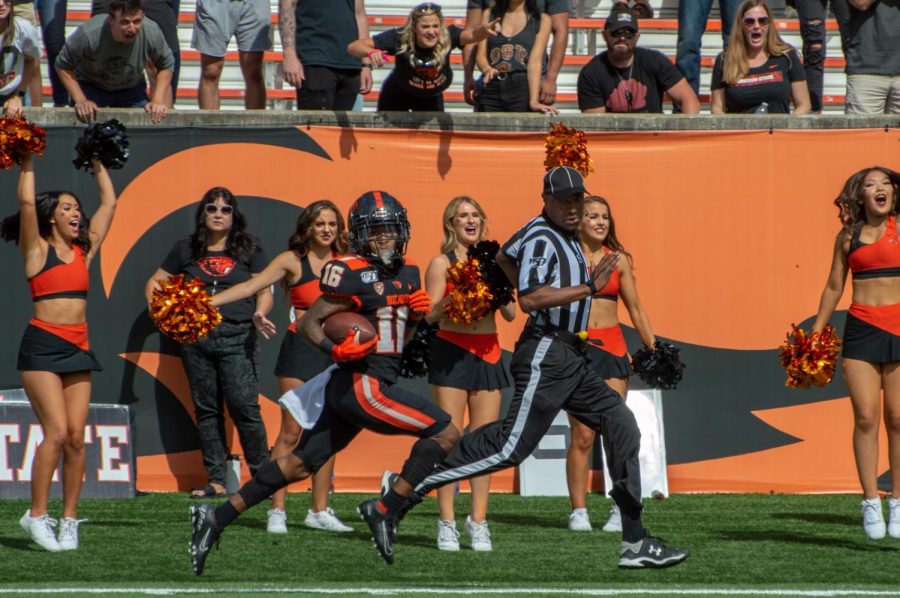 OSU Football redshirt sophomore running back Champ Flemings breaks away on the sideline for a touchdown play versus the Cal Poly Mustangs on September 14 in Reser Stadium.

The Oregon State Football team faced the Cal Poly Mustangs on Saturday, September 14 in Reser Stadium with a 1:17 p.m. kickoff. The Beavers secured their first win of the 2019 season with a 45-7 win over the Mustangs.

Both offenses were able to find the endzone on their opening drives and did so without much resistance from the opposing defense. The Beavers struck first, with Oregon State using a run-heavy attack led by senior running back Artavis Pierce to move the ball. They capped off the drive with an eight-yard touchdown throw from redshirt senior quarterback Jake Luton to junior wide receiver Isaiah Hodgins.

Cal Poly found early success with a deep 53-yard throw to Cal Poly Football senior wide receiver J.J. Koski. The Cal Poly drive ended in an eight-yard touchdown pass. The Cal Poly offense then struggled to find their footing against the Oregon State defense as they failed to score for the remainder of the game.

Cal Poly Football sophomore fullback Duy Tran-Sampson found success running the ball with 147 yards on 29 carries but the Mustangs’ triple-option scheme struggled to find much success with any other runners. Freshman quarterback Jalen Hamler managed just 27 yards on 21 carries against a Beavers defense.

The Beavers’ defense was able to contain the rush offense more successfully than in the first two games of the season. The improvement on defense was noted by OSU Football head coach Jonathan Smith.

“We’ve put good plans together,” Smith said post-game. “We’ve began to continue to improve each week in executing those plans.”

The Beavers defense ended the game with three sacks and 10 tackles for loss as well as recovering two turnovers. A fumble by Cal Poly redshirt freshman quarterback  Jalen Hamler was recovered by OSU freshman inside linebacker Omar Speights. OSU redshirt senior defensive back Shawn Wilson also gained an interception for the Beavers’ defense.

The Cal Poly defense managed one tackle for loss and two quarterback hurries on the day.

“They carried it well,” said Smith. “We’ve talked about having depth at that position and I think it showed here again today.”

The Beavers’ offensive starters were pulled out of the game into the second half. OSU redshirt sophomore quarterback Tristan Gebbia and redshirt sophomore running back B.J. Baylor were able to finish the game with clock management and a touchdown in the third quarter after a 75 yard run from Baylor.

The Mustangs’ defense allowed the Beavers to score once in the second half and gained an interception off a deflected pass from Gebbia. Cal Poly did not capitalize in the red zone but was ended consecutive drives with missed field goals in the second half.

The Beavers will be going into a bye week and will go into conference play when they face Stanford on September 28th in Reser Stadium. The kickoff time for the game will be announced on Monday, September 16.