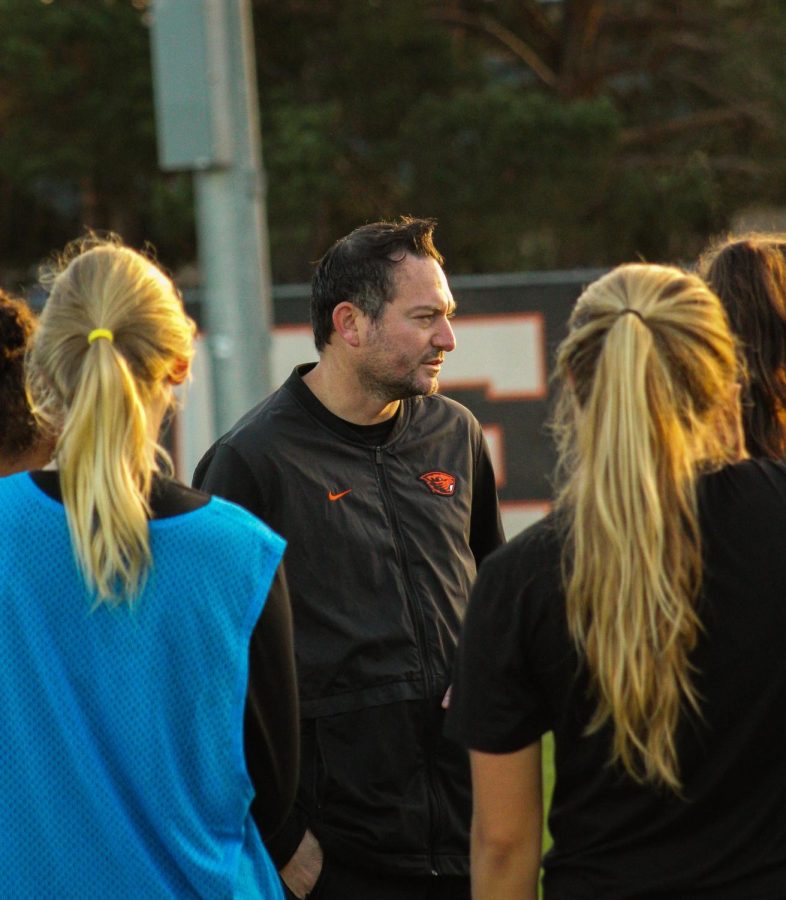 It’s a cloudy Thursday afternoon at Oregon State University. Students are bustling around campus during the second day of classes and the bookstore is packed.

As new faces flood past familiar buildings, Matt Kagan in his office and focused on the task at hand: rebuilding the OSU Women’s Soccer program.

Hired in Dec. 2018 from Mississippi State University, Kagan was one of 81 people to apply for the head coach vacancy within the OSU Women’s Soccer program. According to OSU Vice President & Director of Athletics Scott Barnes, there was a reason he stuck out from the rest of the applicants.

“He articulated a specific plan for OSU that wasn’t just a cookie cutter plan and that is when I felt he would be a great fit for our program,” Barnes said via email.“I think his focus on evaluating and the development of talent is key. He has great conviction for selling OSU and believes we can be excellent.”

Developing talent has been key for Kagan’s Beavers, who started the season by winning eight-straight games and outscoring opponents 21-3. The perfect start set a program record for wins to begin the season.

After a 2018 season that saw the Beavers win just two games, the team was in need of change. According to sophomore goalkeeper Bridgette Skiba and junior midfielder Kaillen Fried, the reason for their success this season is simple: culture.

“It’s completely different due to Coach Kagan. He emphasizes the importance of who we are as people first,” Skiba said via email. “He also wants us to be self-guiding leaders and try to figure out answers among each other.”

“Our team has been closer than it has ever been and that’s a lot on the coaches and the culture they have brought in,” Fried added via email.

Even with the hot-start, Kagan admitted that the team currently has six players learning a new position. Under Kagan’s tutelage, Fried said she has learned more in the last six months about her defensive positioning and organization than she had in her whole life before Kagan arrived on campus.

Despite his emphasis on player development being one of the main reasons he was hired as head coach, Kagan was quick to divert the attention back to his players.

“These kids are everything,” Kagan noted. “Obviously with the wins, there’s been a lot of focus on Matt Kagan, which I don’t think is right to be honest. The focus should be on these players. These players have come in, they wanted a change, they’re focused every day, they work their tails off.”

The commitment to improving every day and initiating change didn’t come out of nowhere. Having grown up in Connecticut, Kagan is a committed New England Patriots fan, and draws inspiration from Patriots long-time head coach Bill Belichick. The key to Belichick’s coaching style? Focus.

While he may have started on the opposite side of the country from Oregon State, it has been quite the journey to end up in Beaver Nation for Kagan. With previous jobs in Florida and Los Angeles, Kagan was at Mississippi State University before accepting the position as head coach of the OSU Women’s Soccer team.

Now in Corvallis, Kagan said his off days are limited but he tries to make the most of them.

“Especially during the fall, for coaches, we don’t really have off days,” Kagan said. “So when I do, it’s just playing a little golf, spending time with my wife, and trying to not think about soccer.”

Kagan also said he’s a huge fan of Pearl Jam, and enjoys relaxing while he can.

When not on the soccer field, Fried described her head coach as one who is approachable and easy to talk to. She also added that Kagan is “very funny.”

“He is almost like a second dad,” Skiba added. “He cares about the whole team and makes sure that we are taking care of ourselves.”

With a head coach focused on changing culture and developing players, the team will look to build on their strong start through conference play. Despite their loss to Washington State in Pullman, WA on Saturday, Sept. 29, they will continue to strive for success under Kagan.