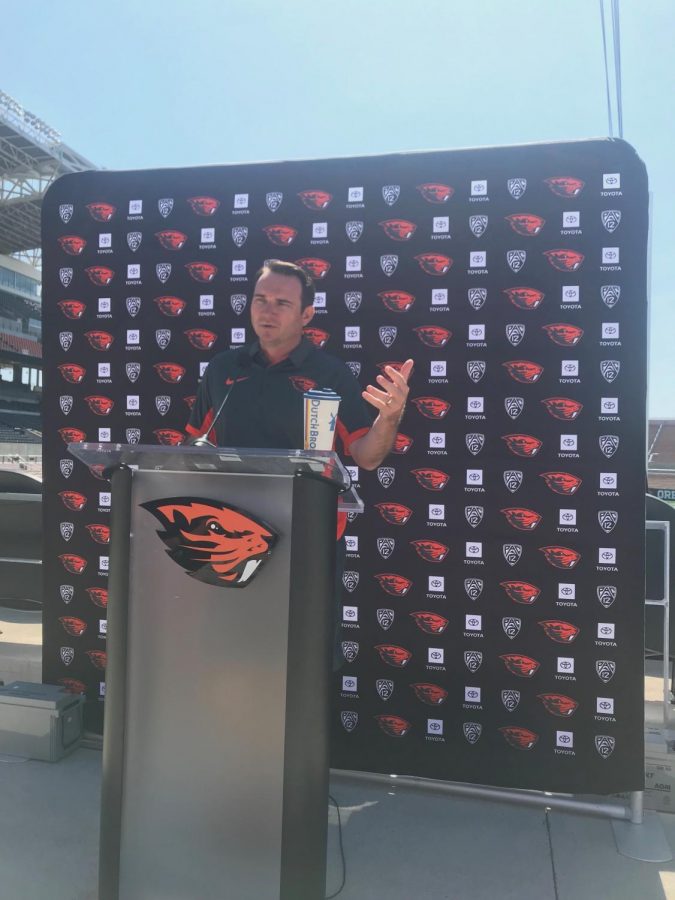 The Oregon State Football season begins with a 7:30 p.m. kickoff versus Oklahoma State on Friday, August 30 at Reser Stadium. Fall camp and practices began August 1, the day after a media day with players and coaches available to discuss the upcoming season.

OSU Football senior inside linebacker Shemar Smith talked about the team working hard in the offseason to become faster and more powerful. He recognized the pressure the defense faces but acknowledged that the defense will always face pressure any given Saturday.

As a senior, Smith has worked under two head coaches and one interim head coach. OSU Football head coach Jonathan Smith is entering his second season in the position. Shemar Smith noted the changes in the culture of the team under Jonathan Smith.

“This new era is, with one word I could give, is unity,” Shemar Smith said. “Everybody knows each other, everybody talks, everybody communicates.” He noted that players are less focused on their own success and are focused on the team.

OSU Football redshirt sophomore linebacker Addison Gumbs transferred from Oklahoma last season and is entering his first season of playing eligibility with the Beavers. Gumbs said his transition as a transfer has been smooth, mostly due to the people of OSU and his coaches.

Gumbs noted it has been a childhood dream of his to play in the PAC-12 and he is looking forward to being able to follow through on this goal. Gumbs also emphasized the importance of the team’s ability to compete as a season goal.

OSU Football redshirt sophomore quarterback Triston Gebbia transferred from Nebraska last season and is also entering his first season with field time for the Beavers. Gebbia said his transition as a transfer has been great as he had time with younger teammates in the spring and more seasoned teammates in the summer.

Gebbia cited his transfer as part of a previous relationship with Smith built during recruiting under Smith’s tenure as the offensive coordinator for Washington. He also wanted to be closer to home and to play in a culture associated with great people. Gebbia’s outlook on the upcoming season after the offseason was positive as well.

“We’ve got a bunch of really great guys on this team that are hungry for success and something we’ve been working for for the last 8 months,” Gebbia said. “We’re just really excited to get out there into fall camp and take it one day at a time.”

OSU Football redshirt senior quarterback Jake Luton is entering his third season with the Beavers after fighting to stay healthy. Luton suffered an injury in the fourth game and first PAC-12 game of the 2017 season, leaving him unable to play for the rest of the year. Luton is likely to be a go to at quarterback for the Beavers as he begins his sixth season of eligibility due to other injuries.

Luton noted two themes for the team in the upcoming season as urgency and consistency. He described urgency as being ready on the field no matter the situation and defined consistency as being at the same level of play at the last play as they have on the first play. Luton also discussed the team’s development during Jonathan Smith’s era as head coach.

“Really the last two years has been so much just getting to know the coaches and trying to understand each other and build it from the ground up,” Luton said. “This offseason has really been continuing to build the relationships. I think that’s really big for the team from both an on-field and off-field standpoint. When you really know each other and can have trust in the relationships, then on the field is just going to be better.”

OSU Football junior wide receiver Isaiah Hodgins enters the 2019 season while being on the Biletnikoff Award Watch List, an honor given to the best wide receiver in the country each season. Hodgins noted the necessity of the team working together on all aspects in order to have a chance at the award.

Hodgins also referenced the unity of the team, saying that it is rooted in bonding both on and off the field. He emphasized the team’s performance will grow with the unity. As a wide receiver, he spoke on the options of starting quarterback as Luton or Gebbia.

“Knowing that we have two really good quarterbacks has helped a lot and knowing that Jake could go in there or Triston at any time that we wouldn’t miss a beat, that will help a lot,” Hodgins said. “I feel like when Coach Smith makes a decision, he’ll make it and from that point on we’ll really start to continue to push and build more.”

OSU Football head coach Jonathan Smith described being excited for the fall practices and for the upcoming season. He emphasized the importance of capitalizing on the moments of success for the offense from last season and developing growth for the defense.

Smith also noted the importance of consistency in the coaching staff. With nearly all of the coaches returning, the players are able to maintain expectations and work on current schemes that were implemented in the last season. Smith identified growth as the measure of a successful 2019 season.

“I want to see us play improved football from game 1 to game 12,” Smith said. “I think it’s realistic to watch us and see us compete down in and down out and compete for four quarters.”