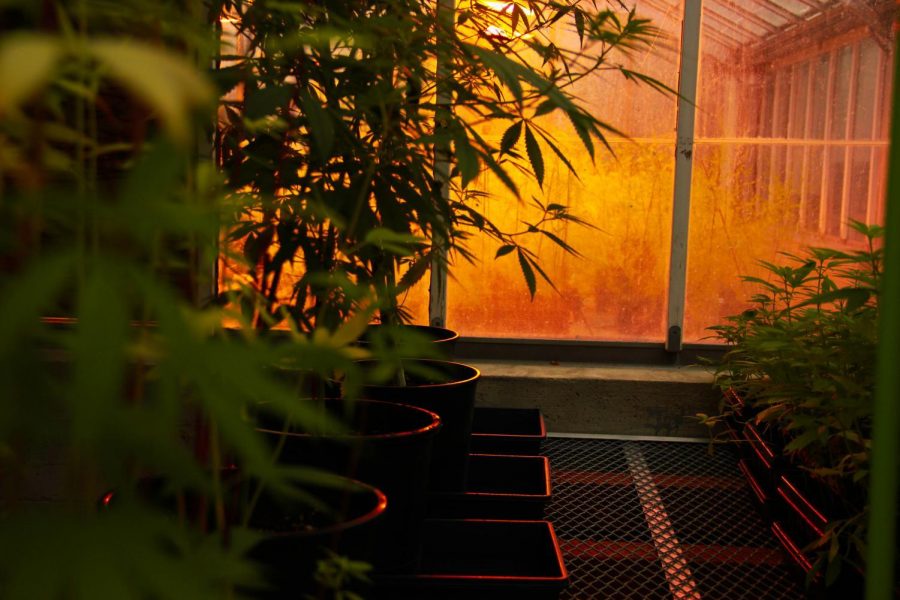 The light of the greenhouse shines differently on different plots of hemp growing in the west greenhouse. This experiment shows how much light is needed for hemp to be productive, and could influence which climates can sustainably grow hemp around the world.

According to Oregon State University professor Jay Noller, the Global Hemp Innovation Center was launched on June 13, encompassing over 40 faculty members from 20 different disciplines across campus and at ten of their research and extension centers located around the world. Noller is a professor in the College of Agricultural Sciences.

The main obstacle that kept OSU from researching hemp earlier was solved by the passing of the 2018 Farm Bill, said Noller. This bill worked to decriminalize the hemp crop so that students and faculty could be involved in the research at OSU.

Noller said that hemp works well with the other crops being researched at OSU, and shows promise for use in several consumer products.

“It can be used as an aggregate in concrete, additional fiber source in wood products, and sound and thermal insulation in buildings,” said Noller.

Some of the other faculty members involved are Dr. Sabry Elias and Dr. David Stimpson, both studying the development and viability of hemp seeds in the Oregon State Seed Laboratory.

“Currently, I am working on developing and validating tests to measure the viability and the vigor of hemp seeds and assessing their planting value,” Elias said. “Other studies are related to the determination of dormancy levels in hemp seeds and methods of breaking it.”

“Freshly harvested seeds are slow to germinate,” said Stimpson. “We are working in the Germination unit to attempt to break the dormancy so we can report the maximum potential germination for any given seed lot.”

For nutrition, faculty members look to the hemp hearts, which contain good amounts of protein, balanced omega fatty acids and micronutrients, according to Noller. In particular, they are researching how this source of protein might affect athletes and the elderly or how it might be used in animal feed.

According to Noller, there are currently undergraduate and graduate OSU students doing research through the Global Hemp Innovation Center.Noller said that the community at large has had a great response to the opening of the center and the researching of hemp.

“It has been overwhelming, our email box is rather full, people wanting to engage with the center, and most of that has been positive. There has been a small amount of negative responses from people who believe it is marijuana. Hemp is in the same genus as marijuana, but it does not have the psychoactive properties of marijuana,” said Noller.

Most of the center’s research is being done overseas in Serbia and Bulgaria, as well as in northern China. The center is partnering with other researchers to test how it reacts with other crops, either positively or negatively.

“When using the name ‘global’ to announce the center at OSU, it is not just a word in the title,” said Noller.

According to Elias, students can find open positions to work on a research team on the Oregon State job website, handshake.

“It is a mutual benefit, where the principal investigator finds the needed student help to work on his/her project and the students gain experience in conducting research and get some financial help while learning new skills.”

“The OSU Global Hemp Innovation Center has at its focus a great symbiosis that works around the world and is the nation’s largest hemp research center,” said Noller. “We are really in a position to be a national leader, working with other universities, providing leadership, and helping move the nation forward with this important crop.”