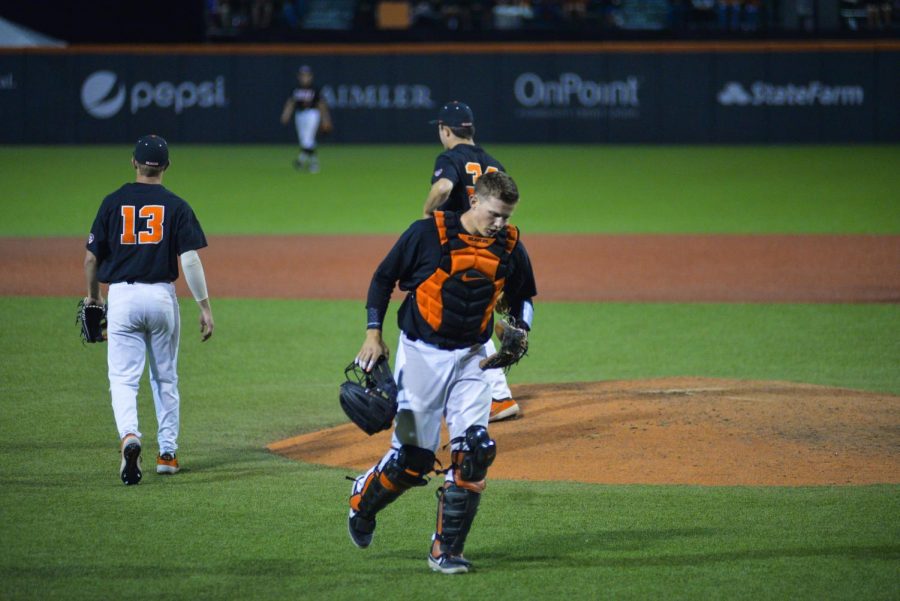 Junior catcher Adley Rutschman walks away from the pitching mound after a mid-game conversation on the field.

In their first postseason action since winning the College World Series last June, the Oregon State Baseball team lost to the Cincinnati Bearcats on Friday night by a score of 7-6 at Goss Stadium.

After allowing three runs in the first three innings, junior outfielder Tyler Malone crushed a 1-1 fastball over the right field fence and cut the deficit to just two runs.

With the Bearcat lead cut down, senior right-handed pitcher Bryce Fehmel settled into the game – striking out three of the next seven batters and allowing the Beavers to build some momentum.

“I think there’s outs to get when Bryce was pitching that we didn’t get. There’s bloop singles that got dropped – one of them was a sun situation, I thought there was a couple balls that were hit pretty well in the outfield that if we took proper angles I think we should have caught as well,” said OSU Interim Head Coach Pat Bailey. “I think Bryce did his job.”

With Fehmel not allowing any runs the next two innings, it paved the way for the OSU offense to make some noise. In the bottom of the fifth, sophomore infielder Kyler McMahan hit his first home run of the season, a solo shot that brought the Beavers to within one run of Cincinnati.

Fehmel’s day came to a close after giving up a sixth inning home run that extended the Bearcat lead to 4-2. He finished the outing with nine hits allowed, four earned runs and four strikeouts across five innings pitched. He was replaced by sophomore left-hander Christian Chamberlain.

Cincinnati plated another runner in the top half of the sixth to grow their lead to 5-2, but the Beavers soon fought back. In the bottom of the seventh, McMahan and Malone once again made an impact in the OSU lineup; McMahan getting hit by a pitch, and Malone drawing a walk.

With runners on first and second, sophomore designated hitter Alex McGarry hit a ground ball through the third base and shortstop, paving the way for Adley Rutschman to come up with the bases loaded and no outs – but his at bat didn’t last long. Despite giving up a run in the process, Cincinnati opted to intentionally walk Rutschman, scoring McMahan. The Beavers had cut the lead to 5-3.

“I mean there was no outs at the time. It’s a big risk they took and we ended up scoring four runs out of that inning,” Bailey said.

Two batters later, junior infielder Andy Armstrong broke the tie with his two-out single to right field that scored Rutschman from second base. Heading into the top of the eighth inning, OSU was ahead 6-5.

Cincinnati tied the game in the top of the eighth, and eventually took the lead in the top half of the ninth by way of an RBI triple.

Rutschman was due to lead off the inning, and the deficit was just a single run. While he may have been walked twice earlier in the game, Rutschman noted that his mindset did not change going into the at-bat.

With the middle part of the lineup coming up, the Beavers had a chance to convert in the ninth inning. However, the 3-4-5 hitters ended up flying out consecutively and the game was over.

“We did a great job of coming back to get back in the game that one inning when we scored four runs,” Bailey said. “But we just didn’t play well enough to win.”

With the loss on Friday, the Beavers will play their next game against Creighton at 1 p.m. on Saturday.