The impact of the walkout, 50 years later 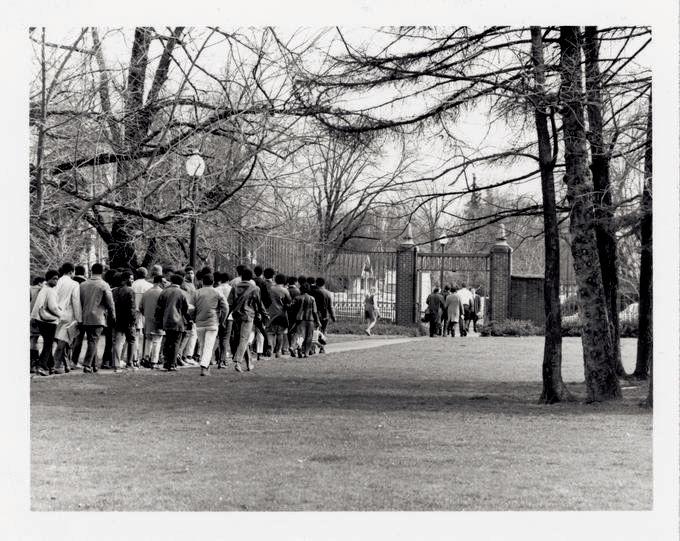 In 1969, African American student Fred Milton was cut from the Oregon State University football team for refusing to cut his hair and beard, despite his coach’s insistence. This control and forced conformity ultimately motivated Milton to help organize a Black Student Union walkout, where 47 black OSU students marched off campus to protest injustices faced by African Americans at the university, according to Dwaine Plaza, an OSU professor of sociology.

This year, students celebrated the 50th anniversary of the walkout by reenacting the event. Participants began at the Lonnie B. Harris Black Cultural Center and walked off campus, led by black students, staff and community members, just as demonstrators did in 1969.

Harris said black students at OSU are often the only students of color in their classrooms. They can also deal with negative feedback from professors, as well as discriminatory questions and interactions with both peers and faculty.

“It’s not just Oregon,” Harris said. “It’s nationwide, because that’s the fabric of this nation, to oppress people of color and other marginalized communities.”

Caleb Michael, a fourth-year student studying speech communication and a student success peer facilitator at the LBHBCC, said the center has helped him build connections and foster a sense of community as a student of color at a predominately white institution.

“I think my favorite part has to be the conversation and laughs we have in the center because there’s nothing like it,” Michael said via email. “The conversations are so raw and natural and they are the main reason I used to go to the center before I worked there.”

Plaza also stressed the importance of the LBHBCC to African American students on campus due to the unique experience of being black in the United States.

“There’s still a sense of wanting to belong somewhere, and having a set of people you can actually walk into a space with that have a similar life and growing-up experience,” Plaza said. “The reality is, growing up as a black person in Oregon or anywhere in the United States, there’s a certain experience you’ve had that others would not have had.”

Harris said it is important to remember past injustices since these have laid the foundation for the oppression and discrimination faced by the African American community today. Plaza mirrored this point, saying although OSU has improved in terms of demographics since 1969, many of the same injustices still resonate in the present day.

“Yes, those students have fought and struggled for some basic rights that all students should be given, but many people would argue that many of the same issues that they were talking about in 1969 have re-occured in 2000, 2010 and now again in 2019,” Plaza said. “The issues are still there—it’s just how they manifest themselves today.”

According to Plaza, a lack of diversity on the OSU campus is a way in which this discrimination is present today. In order to better tackle this issue, Plaza believes the university must invest in Oregon’s lower socio-economic areas and high schools in order to build relationships with students of color and encourage them to attend OSU.

Currently, Harris said the LBHBCC and other cultural centers have paved the way for students of color on campus, and have been successful in creating a sense of community and camaraderie that might not be present otherwise.

“For everybody to come together is unique, that’s special. It’s an experience that will define you for the rest of your life,” Harris said. “This is what college is about, and the centers provide that.”