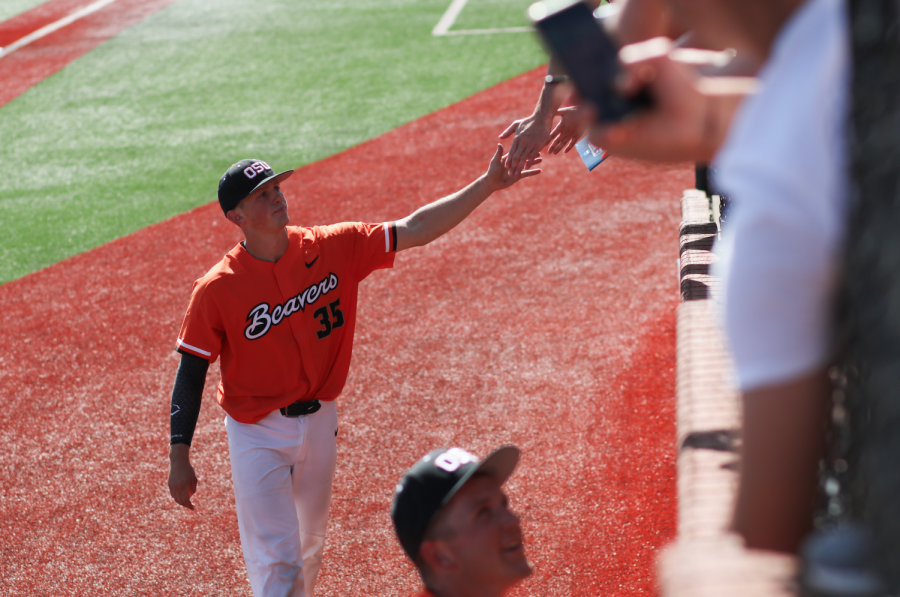 OSU junior catcher Adley Rutschman extendes a fist bump to fans at Goss Satdium after Oregon State’s loss to Creighton. Rutschman has been projected to be the No. 1 pick in the 2019 MLB Draft.

With the spring season sports coming to a close, Oregon State Athletics completes another year full of big plays and record-breaking performances, making history in multiple categories once again.

This year, the OSU Men’s Soccer team finished second in the Pac-12 with a record of 6-3-1, the second-highest conference win total in team history. Their overall regular season record was 10-5-3, the highest win total in four years.

After the Beavers defeated the California Golden Bears on Oct. 14, 2018, Head Coach Terry Boss said the team’s ability to rebound from early mistakes is what led them to the win.

“This team is special and I am really proud and honored to be a part of coaching it,” Boss said. “These young men should believe in themselves because they are special.”

Boss was named the 2018 Pac-12 Coach of the Year, and led the team to the NCAA tournament for the first time since 2014, the fourth time in program history.

In the tournament, OSU Men’s Soccer took down Southern Methodist University in the first round, winning by a score of 2-1. This was the second time the men’s team has ever had a postseason win.

“I couldn’t be happier for these guys,” Boss said after the game. “More than anything, these guys stuck together like the family they have become, and as a coach, I couldn’t be more proud.”

After their regional win in Corvallis, Chaplin said the team honed in and focused on what was needed to get done in order to succeed.

“I am so proud of this team and our staff, they’ve worked so hard this year,” Chaplin said. “I thought they showed a lot of strength, courage, just grit. That’s just incredibly exciting for us.”

This was the best end to the season since 1995 and 1996 for the squad. The team also had four gymnasts awarded the NCAA Second-Team All-American. OSU gymnast senior Mary Jacobsen, and juniors Halli Briscoe, Isis Lowery and Maela Lazaro received the award at the semifinals of NCAA Championships.

The OSU Men’s Rowing team finished fourth overall in the Pac-12 this year. The varsity 4+, powered by senior Austin DeMartine, freshmans Hayden Wildermuth and Matthew Peterkort, junior Josh Hocker and coxed by junior Andrew Bullock, earned a bronze medal for their performance at the Pac-12 championships. The Beavers’ V4+ beat UCLA by seven second, earning them the medal.

According to Head Coach Gabe Winkler, the 4+ did very well this year and their success was a reflection on the time and effort they put in throughout the season.

“They should be proud of earning a Pac-12 medal,” Winkler said. “That is quite an accomplishment. It is a token to their training over the year.”

According to redshirt-junior Tres Tinkle, sweeping the Ducks was huge and there was a great amount of pride in doing so.

“Everyone knows what is at stake when playing your rival, in terms of bragging rights,” Tinkle said via email. “Starting with an away conference opening win against the Ducks was very memorable for many reasons. Then getting a chance to do it again on our home court in front of Beaver Nation was even better.”

For the first time since 2009, OSU softball earned a victory over the Ducks in the first game of the series, with a final score of 8-0 on April 26. The win was also the Beavers’ first run-rule victory against Oregon since 2001.

On March 12, Beaver Baseball defeated the Ducks, 7-6, in a five-hour thriller. The victory gave the team 10 consecutive wins against Oregon. After the game, sophomore pitcher Christian Chamberlain said that the win against Oregon wasn’t very smooth, but in the end, the team was able to pull through and take victory.

“Obviously not the prettiest thing, but the win is the most important thing and we got that,” Chamberlain said.

After the team’s loss against Louisville on March 29 at the Sweet-16 in Albany, New York, OSU Head Coach Scott Rueck said the team played an excellent game and he was proud of the amount of effort put in by the players.

“This team is unbelievable. It’s a group with incredible character, incredible heart,” Rueck said. “We had a phenomenal season.”