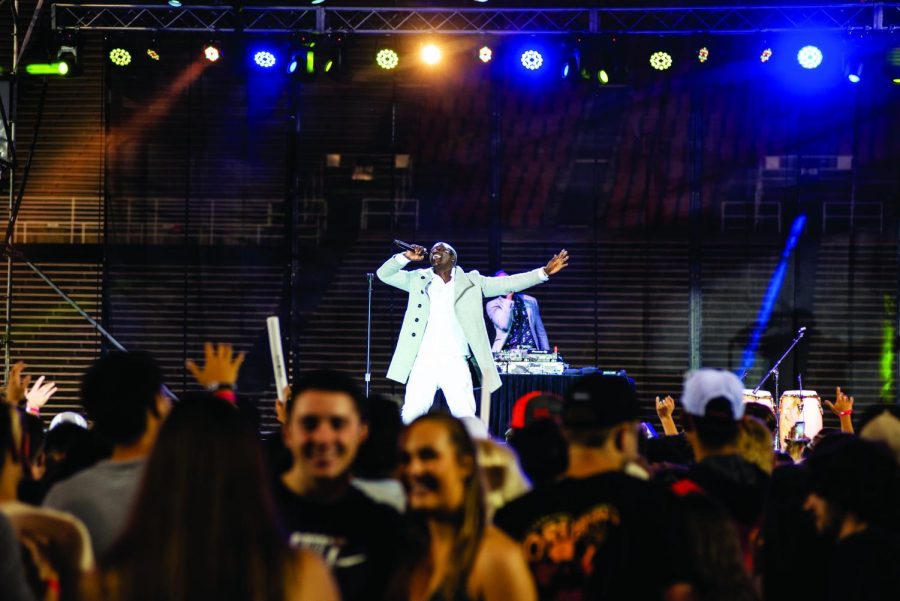 Akon performing his musical set at DAM JAM 2019 in front of a crowd of OSU students.

Oregon State University hosted the annual Dam Jam concert in Reser Stadium for the second year, last Friday, filled with throwback songs and including an announcement by headliner Akon.

One student, DJ Arii Mas, who won last year’s battle of the DJs, was the opening act with a 30-minute set, followed by headliners Jesse McCartney and Akon. Before last year, Dam Jam had been held in the Memorial Union quad since 2006.

Mas played two unreleased songs for the crowd, “No 9 to 5” and “Crop Tops.” The event was emceed by Aiden Tariku and Maddie Washington.

Next to take the stage was McCartney. During his cover of “The Stupid Things,” McCartney pulled a fan on stage to dedicate the song to. First-year business management major Sareal Strain said she was completely starstruck during the performance.

“I don’t really have any words to express how it felt having Jesse pull me onstage. It was definitely something I will never forget,” Strain said via email.

Finally, to cheers and screams, Akon performed a set lasting 70 minutes and including mostly older songs, including those inspired by him going home to Africa. The crowd reacted most to Akon’s performances of “Mr. Lonely,” “Smack That,” “Sorry, Blame it on Me,” and “I’m So Paid.” At the end of his performance, Akon announced he will have four albums coming out on August 30 of this year.

Lead Event Coordinator for OSUPC Music and Concerts Committee Lauren Harter helped plan and prepare for Dam Jam in fall 2018 alongside Marito Binag and Jensen Ocampo. Binag was the emcee of last year’s Dam Jam, and this was his first time working on the planning committee. OSUPC is a team within the OSU Program Council that directly organizes Dam Jam.

“I had so much fun working with our event coordinator team throughout the year, working on different events and building impactful relationships with them,” Binag said via email. “Seeing all of us working this long day and finally see all of this come together was a big highlight of my year.”

“Our event is constantly growing and changing in order to provide the best experience for everyone in attendance,” Harter said via email. “Our goal with venue selection is to provide a space to fit as many people as we can in the safest conditions possible to provide a fun experience for all.”

Harter, Binag and Ocampo helped organize the adjustments they felt were necessary after last year’s Dam Jam. According to Binag, after seeing Reser as a venue for Dam Jam last year, they wanted to focus on making the stage closer and changing the processes of food, drink and field access.

“I could tell that both the students and performers were having so much fun, it almost brought me to tears,” Binag said via email. “Looking out into the crowd thinking ‘We finally made it’ knowing that we had just planned the best concert at OSU to date and were able to leave a lasting impact on some students’ college experience.”

The OSUPC Music and Concerts Committee worked hard to get this year’s Dam Jam to be a success, and Harter believes their hard work paid off.

“Attendees had fun, day-of operations went well, our partners were happy. I can’t wait to take the momentum and energy from this year’s event and carry that into the planning for next year,” Harter said via email. “With that being said, I am also looking forward to seeing how we can continue to improve the event. This year was a blast and I am hopeful that next year’s Dam Jam will be as great as this year was, and more.”