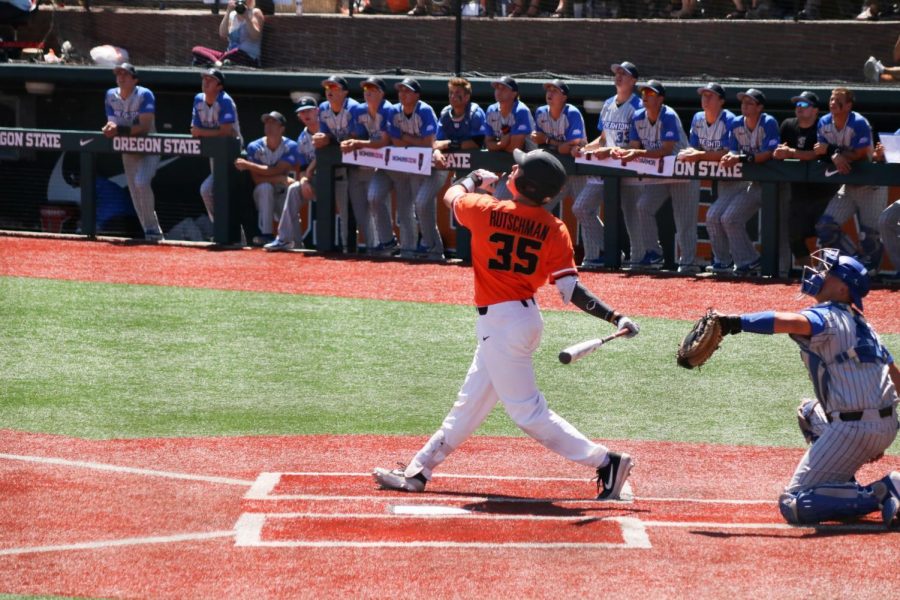 OSU Baseball junior catcher swings at the plate during the NCAA Regionals on June 1st at Goss Stadium.

Oregon State Baseball junior catcher Adley Rutschman has collected numerous awards in the few weeks since the end of the baseball season. Rutschman’s awards follow his selection as the number one overall MLB Draft pick to the Baltimore Orioles in early June.

Rutschman’s first award was as the 2019 and 42nd Golden Spikes Award Winner with USA Baseball. The award is presented in partnership with the Rod Dedeaux Foundation.

The Golden Spikes Award is given to the top amateur baseball player who shows both athletic ability on the field and sportsmanship off the field. Rutschman joins seven other PAC-12 baseball players who have been honored by the award and is the first OSU baseball player to be selected.

Rutschman was a Gold Glove recipient as he was selected by the American Baseball Coaches Association and Rawlings to the NCAA Division I Gold Glove Team.

Rutschman joins former OSU Baseball infielder Nick Madrigal with the honor. Madrigal was the fourth overall pick in the MLB Draft in 2018 and currently plays within the White Sox minor leagues.

Rutschman additionally was honored with the Dick Howser Trophy, which is presented to the national baseball player of the year. The award is given as a tribute to the collegiate and MLB player Dick Howser, who passed away from brain cancer in 1987 at 51 years old, and is based on the four values of courage, character, leadership and performance.

Rutschman was selected for the Consensus First Team All-American along with UCLA junior pitcher Ryan Garcia.

These national awards are paired with multiple PAC-12 recognitions for Rutschman. He was selected as the PAC-12 Baseball Player of the Year and is the sixth OSU baseball player to receive the honor in the last 10 years.

Rutschman was selected to the PAC-12 First Team and the PAC-12 Defensive Team. Additionally, he was chosen as PAC-12 Co-Defensive Player of the Year alongside Stanford junior catcher Maverick Handley.

Rutschman was chosen for several awards throughout the season as well. He was named the National College Baseball Writers Association National Player of the Month in April 2019 and was named a two-time PAC-12 Player of the Week for March 19, 2019 and April 8, 2019.

Rutschman is additionally a finalist for the Buster Posey Award, which will be announced on June 27th. The award honors Florida State alumnus catcher Buster Posey who played in 2006-2008. The award was initially titled the Johnny Bench National Collegiate Catcher of the Year Award. This is the first year that the award has been given in recognition of Posey’s college career and is presented to the top catcher in college baseball.

With a signing bonus of approximately $8.5 million, Rutschman is expected to continue his career in baseball with the Baltimore Orioles in response to being the first overall draft pick.

Played and started in 57 games