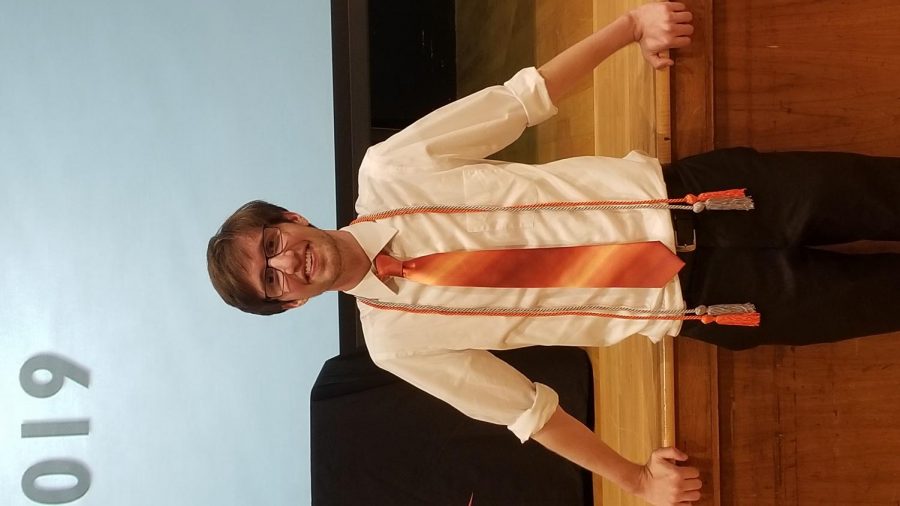 With graduation in sight, college deans highlighted outstanding seniors who have made their mark during their time at Oregon State University.

Juwan Johnson will be graduating with a bachelor’s in nuclear engineering. Johnson said his main motivation has been having young family members who look up to him. Additionally, his involvement in Pi Kappa Phi and the OSU rugby team provided him with support and taught him to be a hard worker, both academically and athletically.

“My screen saver on my phone is a picture of my nephew, to remind me why I go to school and accomplish such feats,” Johnson said via email.

According to Johnson, the opportunity to become a research assistant under Dr. Marcum allowed him to gain experience, and has led to his achievements in engineering.

Johnson said after graduation he is coming back to OSU to complete his Masters in Nuclear Engineering Thermal Hydraulics, so he can run his own business in the environmental or energy sector.

Johnson advises other students to make a plan and work ardently toward their goals.

“If you have a plan, and stay true to your plan, you can and will accomplish great feats if you keep yourself accountable,” Johnson said via email.

Melina Baker is an interior design major who has won several interior design competitions, called charrettes, around the United States. On June 10, she will compete at the national level at NeoCon. Baker said her main motivation throughout her time at OSU has been knowing she is going into a fulfilling career.

Additionally, Baker said OSU’s career decision-making class led her to interior design, and she highly recommends others take this course if they are unhappy with their current studies.

“I was a business major originally my freshman year, and I actually took the career decision-making class that they had here, because I was not happy. I was crying to my parents all the time, I don’t want to sit here and do Excel spreadsheets for the rest of my life. I just wasn’t enjoying any of it,” Baker said. “They were really hard on me, so I took that class. I really love that class, I really think that everyone should take it. It really gets down to your values and what you actually want in life.”

After graduation, Baker hopes to go into the hospitality industry, designing hotels and chains around the world.

Natalie Jean Wright has been raising her son throughout her time at OSU. Majoring in natural resource science and specializing in education, Wright hopes to teach children about the management of natural resources after graduation, and has applied to be a part-time lead nature instructor at the Corvallis Environmental Center.

Wright said she could not have stayed on track to graduate if it wasn’t for her advisor and the many programs supporting student parents here at OSU. She encourages students to take advantage of these resources.

“I’ve had an irreplaceable advisor in the College of Forestry — Terina McLachlin has encouraged and supported me throughout my education. She couldn’t be better at what she does,” Wright said via email.

Wright said her main motivation has been to provide a better life for her family.

“We desperately want to have a dog but have been waiting patiently for the time when we can be out of an apartment and have a yard,” Wright said via email.

Austin Carsh, a political science major, has been accepted into several Ivy League schools, and will be attending law school in fall 2019.

“I got into the University of Chicago Law School, which is one of the top five law schools in the country. Instead of being nervous, I said that I have the opportunity, someone’s going to do it, it might as well be me,” Carsh said.

Carsh said the American politics research conducted with Dr. Solberg and Dr. Stout, along with his participation in student government, provided him the opportunity to be admitted to law school.

As a career, Carsh said he would love to be a member of the Supreme Court someday, but is satisfied being a practicing lawyer or law professor.

Carsh said he advises students to get involved, make connections and remain goal-oriented.

“Get involved with things that you care about. Not necessarily the top resume item, but something that you are really passionate about, because I think that people will see that passion and they will recognize that as more important,” Carsh said.

Carmen McCormack is graduating with a Bachelor of Fine Arts with an emphasis in painting, and was one of two graduating seniors to have her paintings displayed at a Portland gallery. McCormack said making connections with professors, being present and actively learning in class allowed her to achieve this feat.

McCormack said her main motivation is her competitive spirit. For example, McCormack described criticism from artist Reed Anderson during a one-on-one portfolio review.

“He looked at my paintings, and the first thing he said was ‘Carmen, you’re not confident,’” McCormack said.

McCormack said her fear of failure was limiting her ability to achieve the level of mastery that she wanted.

After graduation, McCormack said she will enter a Master in Fine Arts program to potentially teach at a university one day. McCormack said the best advice she could give students is to be confident and embrace who they are.