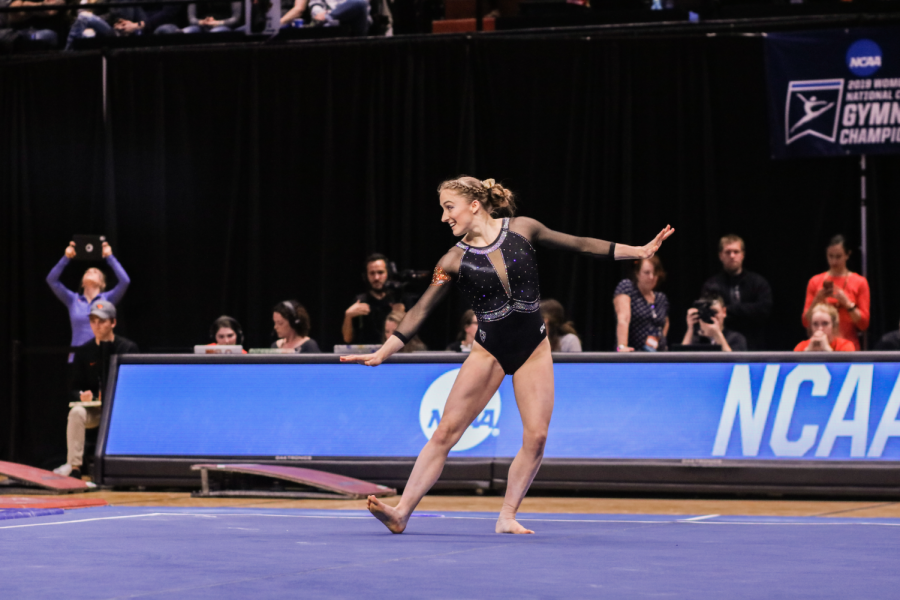 After graduation Colussi-Pelaez, Jacobsen and Singley all have plans for success in their future.

Colussi-Pelaez, who will be earning a degree in microbiology, will be attending medical school in September at University College Cork in Ireland. According to Colussi-Pelaez, she is very excited to graduate and she will miss the people at OSU the most.

“These past four years I have accomplished and grown a lot, but I am ready and eager to move on to the next chapter in my life,” Colussi-Pelaez said via email. “The coaches always cared so much about me not just as a gymnast, but also as a person and my teammates were always so uplifting and kindhearted and we’ve become like sisters.”

Colussi-Pelaez’s, who received five event titles on bars, said her favorite moment with OSU Gymnastics was qualifying for nationals at the NCAA Super Regional in Gill Coliseum this season.

“It was such a special moment, especially being in front of our home crowd,” Colussi-Pelaez said via email.

Jacobsen, who is earning a degree in computer science, will begin her career as a software engineer for Google in the Engineering and Technology Division in September. According to Jacobsen, she will start by learning large scale distributed processing and Google-style test-driven development.

Jacobsen, who earned nine event titles with five on vault and four on bars, is enthusiastic to be graduating, but is sad is to be leaving all of her friends in Corvallis.

“I am going to miss being surrounded by my OSU gym family, my church The Branch, the beautiful campus and all the things I’ve grown to love about Corvallis,” Jacobsen said vie email. “I’ve really grown roots here so it is hard to leave.”

After graduation, Singley will be attending her dream school at the University of Utah S.J. Quinney College of Law. Singley, who is earning a degree in sociology, is thrilled to be graduating because she has wanted to go to law school since she was young and is excited about what the future has to offer her.

“I’ve always wanted to have a career that I’m able to help people and stand up for justice, and a law career does just that,” Singley said via email. “I have an interest in criminal prosecution right now, but I’m going in with an open mind and will see if anything else sparks my interest. Ultimately, I would like to become a judge.”

Though she is ready for the future, Singley said graduating is bittersweet because she has created another home and family at OSU that is going to be difficult to leave. Singley won 10 event titles throughout her gymnastics career with four in the all-around, two on vault, one on bars, one on beam and two on floor.

“My coaches and teammates truly became my second family and I’m going to miss them more than anything,” Singley said via email. “I’ve never been on a team that has so much genuine love and support for each other.”

Singley had two favorite moments this year in gymnastics. The first was the team’s upset against Florida at the regional tournament that qualified OSU for the NCAA Championship meet.

“This team worked unbelievably hard all season and to see it pay off was absolutely incredible,” Singley said.

Her second favorite moment was her final routine at the championship. According to Singley, she was battling multiple injuries throughout the year. This made the season difficult at times for her physically, emotionally and mentally. Overcoming her struggles made sticking her last gymnastics performance a special moment.

“To be able to finish my career with a solid beam routine and stick the landing was all I could ask for and to have my mom in the stands to watch that made it even better,” Singley said via email. “I had a flood of emotions as soon as I finished. I was able to run to my teammates and be taken in and hugged, which was amazing and a moment I will never forget.”