The Daily Barometer • May 28, 2019 • https://dailybaro.orangemedianetwork.com/4512/daily-barometer-news/osu-student-testifies-before-state-senate-protects-native-american-women/ 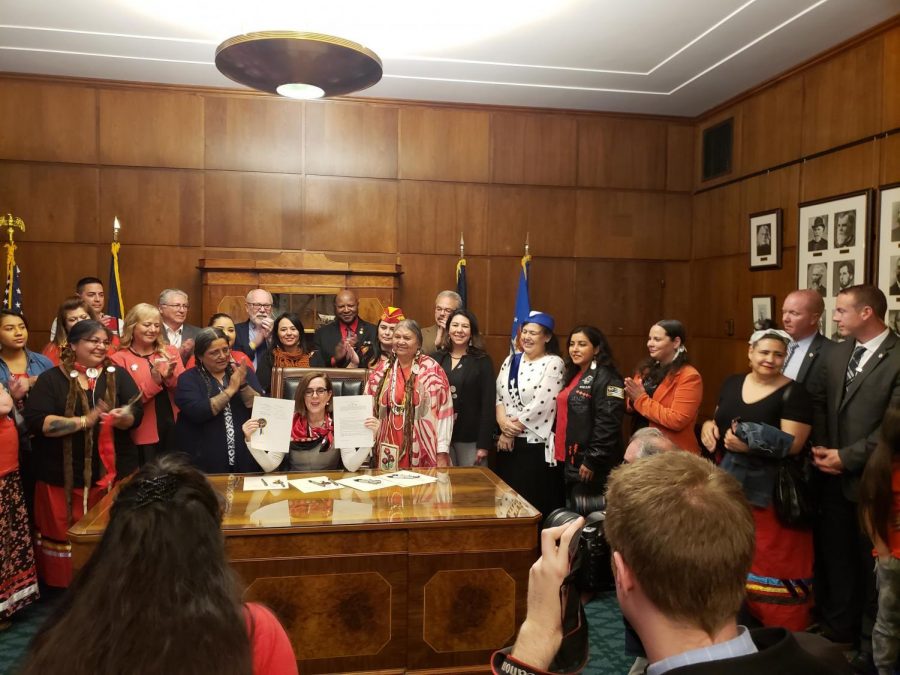 (Right) Luhui Whitebear watches as Oregon Governor Kate Brown signs a bill to launch an investigation within the state of Oregon asking the different law enforcement agencies, between the state and the Oregon tribal communities, to work together and recognize the extent of the issue of missing Native American women.

University Ph.D student spoke in front of the state Senate in support of a bill that directly affects her community, helping push to focus on the issue of missing Native American women.

Luhui Whitebear, a third-year Ph.D student at OSU studying women, gender and sexuality studies, with a graduate minor in queer studies, testified in front of the Oregon Senate Judiciary Committee in support of House Bill 2625, titled “Relating to missing Native American women; and declaring an emergency.” The bill was recently passed.

According to Whitebear, the statistics state that Native American women are 10  times more likely to be murdered than any other group of people, largely due to the jurisdictional issues that exist around jurisdictional boundaries for law enforcement and the lack of shared data across agencies.

For example, the murders committed on reservations or tribal lands are under the jurisdiction of the feds, not the tribal police and the two don’t always necessarily share data with each other, according to Whitebear.

“Too many families are impacted so deeply by their loved ones going missing or being killed, and there are clear patterns around indigenous women being specifically targeted,”  Whitebear said via email.

Whitebear also said Native American women are often misidentified when they go missing, so the rates are probably higher than what is reported.

House Bill 2625 will launch an investigation within the state of Oregon asking the different law enforcement agencies, between the federal, state and the Oregon tribal law enforcement agencies, to work together and recognize the extent of the issue within the state of Oregon. At the moment, there is no complete data surrounding the issue and the data that has been collected is unorganized, according to Whitebear.

Ameyalli Mañon-Ferguson, a sixth year student majoring in fisheries and wildlife science with a specialization in Native American ecology, a double major in Sustainability and a major in Ethnic Studies with a focus on Native American studies and a minor in Spanish, said oftentimes Native American women are targeted because of institutional and social oversight.

“With this bill, not only can Native women be less of a target but we can get a more accurate idea of the extent of this problem,” Mañon-Ferguson said. “Which can kickstart a plan to address it all.”

When speaking to the Senate, Whitebear emphasized that the bill was written not to compromise the jurisdiction or integrity of the different law enforcement agencies, but to provide a way for them to work together with less complications. The bill will not just recognize people who are a part of federal tribes, but also Native American women who are not eligible for tribal enrollment. House Bill 2625 also has the ability to include Alaskan Native women, which is not always the case, according to Whitebear.

“So there are a lot of positive things about this bill that can help us see how bad things are in Oregon, and also for the agencies to be able to work together without any barriers in place,” Whitebear said.

According to Whitebear, House Bill 2625 will help send a message that the normalized violence towards indigenous women that exists in society is unacceptable. Whitebear said the bill is a step forward in the right direction to help create change.

“I advocate for positive social change around missing and murdered indigenous women, because our lives literally depend on it,” Whitebear said.

Mañon-Ferguson, said the bill has given indigenous women a sense of security and relief.

“To me, the passing of this bill means that the lives and wellness of Native women are now legislatively backed,” Mañon-Ferguson said. “The murder and disappearance of our women is normalized and pushed aside as just something that happens to people like us.”

Mañon-Ferguson added, “With this bill, law enforcement will be forced to work with each other across jurisdictions to specifically look into an issue that is so often brushed under the carpet.”