The Daily Barometer • May 5, 2019 • https://dailybaro.orangemedianetwork.com/4518/daily-barometer-sports/osus-all-american-gymnasts-reflect-on-ncaa-awards/ 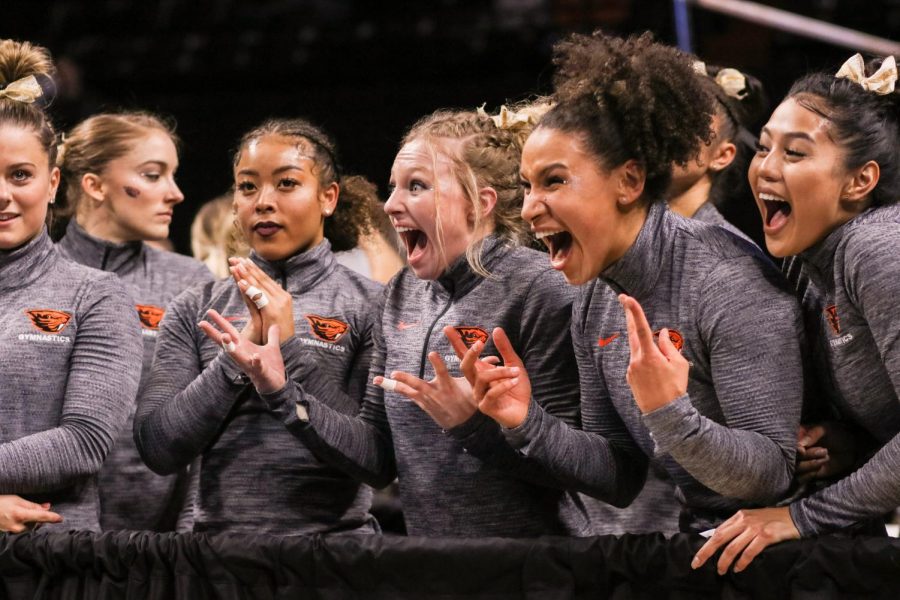 The Oregon State Gymnastics team reacting to their teams' performance on the floor at the NCAA Regional Finals at Gill Coliseum.

The four gymnasts finished fifth through eighth in their semi-final performance at the NCAA Championship. The OSU gymnastics team received a Second-Team All-American award in every event with Jacobson on vault, Briscoe on bars, Lowery on floor and Lazaro on beam.

Lazaro scored a 9.875 on beam at the championship and finished sixth. She added that going into the meet, she was calm and grateful to be competing at the championship because being in the top eight was a huge accomplishment, considering the team was originally ranked 27th. With the help and support from her teammates, Lazaro put no pressure on herself while performing.

“I was really more going into it with a mindset of ‘let’s make the most of it’ because it was going to be the last time I’m going to compete this season,” Lazaro said.

Her teammate, Jacobson, said Lazaro works hard on beam and her performances are absolutely beautiful, so she had total faith that Lazaro could be an All-American. According to Lowery, watching her team get the recognition she felt they deserved was exhilarating.

“For them to just go out there and hit such amazing routines that they do everyday in the gym, honestly made me even more excited than my own accomplishments,” Lowery said. “They just happened to do that at the perfect time and it set them up for those accolades.”

Lowery earned a 9.900 for her performance during her floor routine and tied for seventh. Lowery said if she could pick one event she’d want to be All-American in, it would be floor, her favorite event.

“It’s a huge honor and I am very appreciative of that,” Lowery said. “I have another year left. So, hopefully I can do more and be better in my senior year and I can help the team get even farther next year.”

Jacobsen tied for eighth at the NCAA semifinals and received a score of  9.875 for her vault routine. According to Jacobsen it has always been a goal of hers to be an All-American on bars. She felt that it was her best event, but over her last four years, Jacobsen has been working extremely hard on her vault routine.

“When I stuck my vault and I heard I was Second-Team All American, I was really excited,” Jacobsen said. “It wasn’t exactly the goal I had, but it was still exciting because it was a different way to achieve the goal.”

Briscoe scored her season best of 9.900 on bars at the semifinals and tied for sixth at the meet. According to Jacobsen, throughout the season she has seen the blood, sweat and tears Briscoe put into practice and performances. Jacobsen said watching Briscoe get the award she felt she deserved made her really happy.

“Ever since Halli’s been here, she’s been working to get that perfect bar routine, so when she landed her dismount I almost started crying,” Jacobsen said. “In my opinion, her performance was perfect.”