The Daily Barometer • May 14, 2019 • https://dailybaro.orangemedianetwork.com/4521/daily-barometer-sports/no-11-osu-baseball-beats-pilots-ends-tuesday-game-drought/ 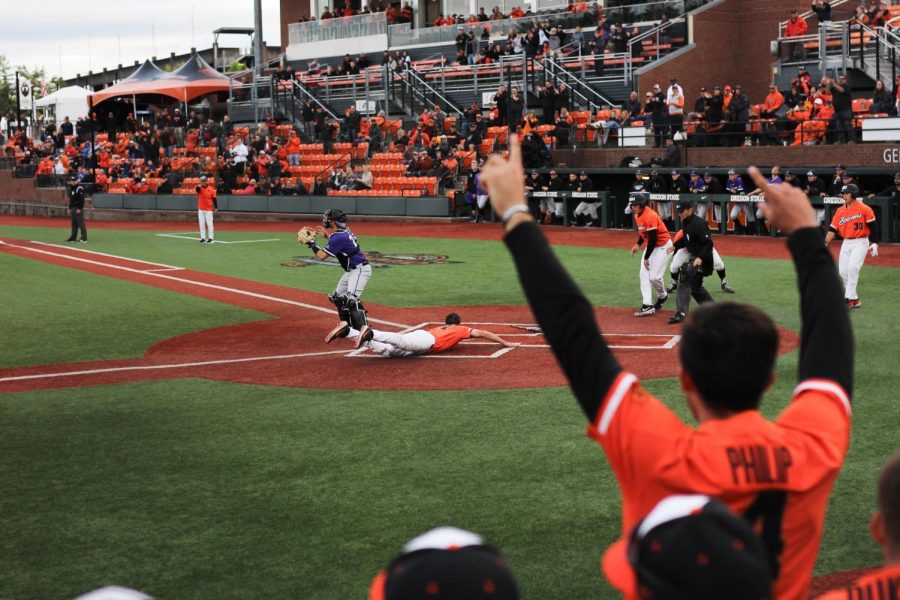 Oregon State Baseball defeated the Portland Pilots on Tuesday night at Goss Stadium, with a final score of 4-3. This was the first Tuesday game OSU had won since they slipped by Oregon, 7-6, at home on March 12, their first Pac-12 contest of the season.

The Beavers, who lost their last meeting against Portland in March by a score of 5-1, took an early first inning lead after a one run RBI single by junior outfielder Tyler Malone.

After the homerun, OSU sophomore pitcher Nathan Burns came in the game to relieve freshman pitcher Jake Pfeffings. Burns proceeded to shutout the Pilots and did not allow a single hit for the rest of the game.

“I felt very good about my outing and it is something to build off of,” Burns said. “I felt a lot more comfortable and relaxed. More often than not I pitch with a lot of tension. Tonight I felt really relaxed.”

The Beavers trailed 3-1 until in the seventh inning when redshirt sophomore infielder George Mendazona hit a three run double to give OSU a 4-3 lead.

“He left a fastball low and over the plate. I love low pitches, anything low and in the zone is something I can usually handle pretty well,” Mendazona said. “I was able to put a good swing on it, and put it out in the gap. McGarry got such a good jump on it from first base, him being able to score on that was awesome. I’m just glad I was able to come through for the guys tonight.”

According to Mendazona, it was great to see Burns play at a high level in meaningful innings.

“Seeing guys that don’t have a lot of innings like Burns, I mean he really dealt tonight and filled up the zone. He just had great stuff all night and really pitched with a purpose,” Mendazona said. “It’s really cool to see someone like that really grow up, it was just like a whole other man up there tonight.”

The Beavers, who are currently in a three way tie for first place in the Pac-12 along with Stanford and UCLA, will travel down to Stanford on on Friday, May 17, to take on the Cardinal at Klein Field. With a series win, OSU has a shot at taking sole possession of first place in conference.