The Daily Barometer • May 28, 2019 • https://dailybaro.orangemedianetwork.com/4536/daily-barometer-news/freedom-is-not-free/

‘Freedom is not free’ 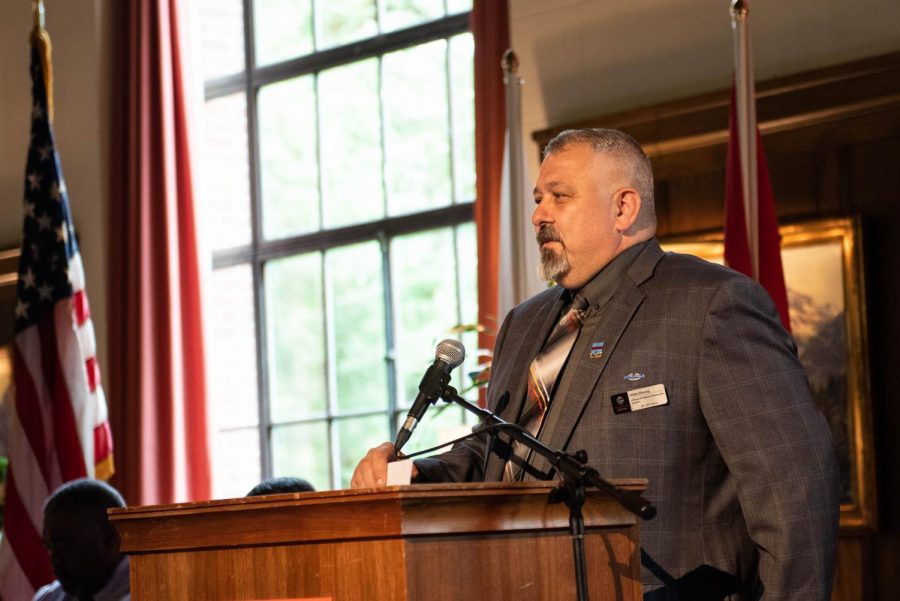 Military and Veterans Resource Adviser and veteran, Willie Elfering, speaks during a memorial vigil on Friday, May 24.

Memorial Day, currently observed on the last Monday of May, is a day for remembering and honoring people who have died while serving in the United States Armed Forces, and is a solemn, personal day for some veterans affiliated with Oregon State University.

According to Willie Elfering, OSU’s Military and Veteran Resource Adviser and a veteran himself, many civilians blur the meanings of holidays related to military service. Veterans Day celebrates those who have served and Armed Forces Day recognizes those who are currently serving, while Memorial Day honors Americans who have made the ultimate sacrifice.

Elfering came to OSU after he graduated high school with no intention of joining the service, but joined the National Guard. Elfering soon realized that he was a better soldier than student, so he applied to go full-time with the National Guard.

Elfering spent 25 years in service. Twenty-two of those years were in active duty, with a couple combat deployments in Iraq and Afghanistan. He made his way up from a private to a sergeant major by the end of his service.

“Growing up with a family that has seen service, you know the meaning of Memorial Day,” Elfering said. “Our first combat deployment, we lost nine soldiers. Some of these men I knew since they were boys, before they even put on their first pair of military boots. I was there when they were thinking of joining, I shared stories with their dad, so it’s much more personal when there’s a face and a voice to the people that you’re memorializing.”

President of the Student Veterans Association, Anthony Minniti, a second-year electrical and computer engineering student, also comes from a military family, a large reason why he joined the U.S. Navy in the first place.

“I joined the military because I come from a military family and I, myself, am a very patriotic American,” Minniti said. “From a very young age, I have felt very strongly that I love our country, I love the freedoms we have here.”

Minniti served six years in the U.S. Navy, he obtained the rank of electrician’s mate nuclear second class. He served four years on the USS Chicago as an electricians mate, operating the reactor there and maintaining the electrical grade on board.

According to Minniti, Memorial Day is a very solemn affair for the veteran community.

“You’ll see people with black wristbands, they symbolize the people, their friends, who have, many times, died right next to them in combat situations where they could not be saved,” Minniti said. “As a non-combat veteran, it’s very solemn because having an understanding, the way I do, of how horrible it must have been for the people who died on submarines in World War II.”

Steven Olson, a third-year speech communications major and vice president of the Student Veterans Association, has a sentimental view of Memorial Day, having experienced personal losses of his own.

When Olson joined the U.S. Army, he enlisted as an infantryman and his job was to engage with the enemy. More specifically, Olson was a paratrooper. He served in North Carolina, out of Fort Bragg for five years, and also did two combat deployments to Afghanistan. He left the army in 2014, then came to OSU.

“I have a pretty personal stake in Memorial Day, I lost three of my good friends on my first deployment to Afghanistan. Spring term is always rough for me because I have to through their [killed in action] dates and, you know, it’s harder,” Olson said. “Memorial Day, for me, is a moment to remember their sacrifices, the men I served with on the deployment and their commitment to our country, it reminds me that I need to be living a great life because they can’t anymore.”

Elfering said everybody’s military service is different, and so is their exposure to personal loss. Each veteran has a different reason for celebrating Memorial day and Elfering said that community and coming together is important during this holiday.

“It’s great that everybody has an extra day off, enjoy the barbecue, enjoy your families, but remember that there’s folks out there who don’t get to do that because they have that personal investment, that they lost that loved one so we can do our barbecues,” Elfering said.

Like Elfering, Olson believes togetherness, in any form, is an important part of Memorial Day.

“It’s not wrong to use it as a day off because, when I think back to what Sam, Ben and Jarrod would do, we would go out and barbecue on Memorial Day with our unit, hang out, have a beer and enjoy the day,” Olson said. “We would go to a memorial vigil that day, but afterwards, we would barbecue and hang out like normal, and I think that’s important because togetherness is what they would want.”

According to Minniti, no matter your plans over Memorial Day weekend, it is important to have a moment of remembrance and thankfulness for the folks who have served and died for our country.

“It’s very important and very human to take a few minutes, nothing long, to really try and honestly think about and understand what you have been given, because that’s the important thing, it’s a gift, it was given to you. Freedom is not free,” Minniti said.

Last Friday at 11 a.m. in the Memorial Union main lounge, SVA hosted its second annual memorial vigil. The intent of the vigil was to remember and bring awareness to the meaning and history of Memorial Day.

Elfering announced the details of the Military Veterans Resource Center’s Gold Star Project. This project provides about 370 names of Beavers who have died in active duty, making the vigil more centralized around the OSU community. Two television sets where set up in the MU main lounges to display the gold star members for those who could not make it to the vigil.

“No matter what, we all have benefited from the sacrifice of our military members. I think that it is important, on Memorial Day, to go to a vigil and understand a little bit about the people who have served, and these vigils can be a great opportunity to talk to folks who might have,” Olson said. “A lot of times, people will bring themselves forward and say ‘I’ve lost somebody,’ and by embracing that, and coming together with somebody in that moment, it can help you achieve a greater understanding of why this day is important.”