The Daily Barometer • May 2, 2019 • https://dailybaro.orangemedianetwork.com/4554/daily-barometer-news/dam-diverse-dance-disinvited-from-take-back-the-night-performance-allegedly-labeled-too-sexual/ 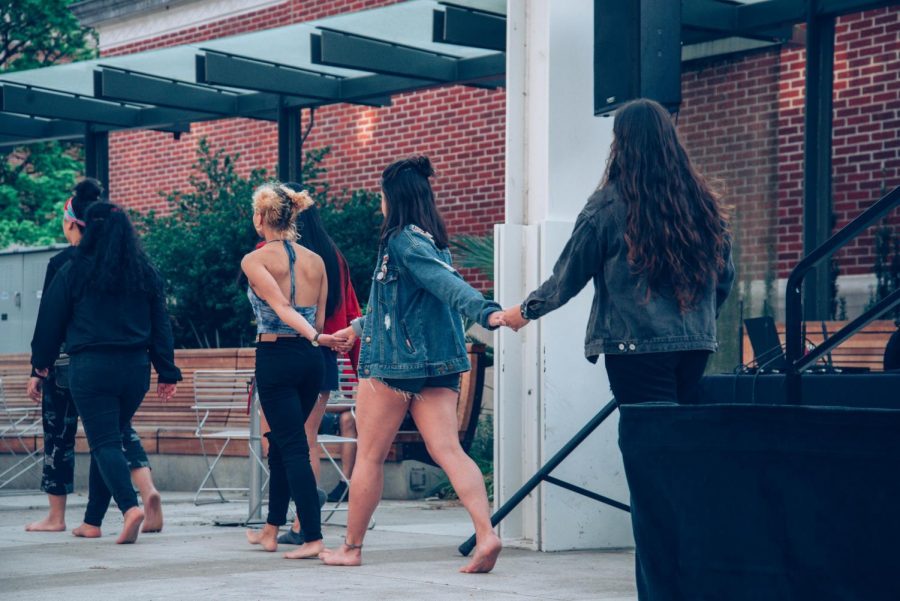 Dam Diverse Dance, also known as 3D, walks off the stage following their silent protest on stage at Take Back the Night 2019.

Instead of performing on stage at Take Back the Night last Thursday, Dam Diverse Dance, or 3D, stood in silent protest of their disinvitation from the event due to the alleged labeling of their intended performance as too ‘sexual.’

3D is a dance group aiming to give women of color the opportunity to embrace themselves and their culture through dance. Members of the group said this opportunity was hindered when they were excluded from performing at Take Back the Night, an annual event aiming to end sexual assault, claiming their performance was labeled too sexual by Judy Neighbours, director of the Survivor and Advocacy Resource Center.

The change of program caused conflict between 3D members and coordinators of the event, eventually leading to Isadora Costa Cardoso, director and creator of 3D, feeling forced to resign from her position at ASOSU for denying their request for her to apologize to Neighbours.

Neighbours said the decision to cut 3D from the event was not due to the content of their performance or discrimination. According to Neighbours, the committee’s decision was due to the stage being too small to accomodate 3D’s performance, and the event had a focus on spoken word.

“This was a SARC decision based upon our vision in organizing a safe place for folks to speak up and learn about the impact of sexual violence,” Neighbours said.

She also said after the conflict between the two parties, she offered to allow them to perform at another event, but 3D denied this offer.

In winter 2019, 3D accepted an invitation from the planning committee of Take Back the Night to perform at the event. During a meeting in a Student Health Services conference room to discuss the details of 3D’s performance and they layout of the venue, Maddie Hansen, graduate assistant at SARC, informed 3D that they would need to change their intended performance. According to the members of 3D, Hansen told the group that Neighbours said the performance was too sexual and inappropriate and would need to be altered.

Costa Cardoso said she decided the group would not dance at the event if they were going to be required to change their choreography, as it felt like changing their identity to fit someone else’s definition of what a survivor should look or act like. According to Costa Cardoso, Hansen said she would talk with Neighbours and make sure 3D would be able to perform without changing the choreography. However, Costa Cardoso soon received an email from Hansen informing her 3D would not be performing at Take Back the Night due to a decision by a vetting committee.

During a meeting with the TBTN planning committee to discuss why their performance was cut, Costa Cardoso said she found out Neighbours was the one who ultimately decided the group would not perform. Costa Cardoso said the group began to speculate about the reasoning for cutting their performance upon realizing Neighbours had made the decision, due to the previous comments that were relayed to them by Hansen. Additionally, at the meeting, 3D said both Neighbours and Hansen claimed to have never said the group’s performance was too sexual or inappropriate.

Hansen did not respond to a request for comment on if she heard and relayed Neighbours’ comment on 3D’s performance.

Josey Koehn, ASOSU coordinator of Wellness Affairs, was in the same SHS conference room when the team’s initial performance was initially discussed, and said she heard Hansen tell Costa Cardoso that 3D’s performance had been found to be too sexual and suggest the choreography be changed.

“My memory of this conversation is distinct, because as soon as that comment was said, I knew it was not the message that should be spread by an organization that aims to help survivors,” Koehn said.

Neighbours said she has never seen 3D’s intended performance for Take Back the Night, which was submitted via video, and never called 3D’s performance too sexual or inappropriate. She said that those phrases promote victim-blaming and distract from the real causes of sexual assault and would go directly against the office’s intentions to aid survivors.

“One of the primary goals of our office is to help survivors recover from their assault, and many times that includes us trying to help the survivor understand that they did nothing to cause the assault. Being sexy is not ever a cause for sexual assault,” Neighbours said.

Costa Cardoso received a letter threatening her employment at ASOSU if she did not write an official apology to Neighbours for speaking to her in a supposedly unprofessional manner while in a professional setting, in addition to other infractions. Costa Cardoso refused to write the letter of apology and thus felt forced to resign.

In the same letter, Costa Cardoso was reprimanded for having her ASOSU title below her name in email communications and using her work email for personal matters and was ordered to stop. Costa Cardoso said this order stemmed from ASOSU’s displeasure with her using her work title in her signature during her email correspondence with Hansen and Neighbours, although she was using her ONID email.

Drew Desilet, ASOSU faculty advisor, said he is unable to comment on Costa Cardoso’s required apology or the end of her employment at ASOSU due to employee confidentiality. Desilet was able to explain that situations with employees are handled uniquely each time.

“ASOSU uses a progressive discipline model when working with employees and that model will be applied differently for each situation,” Desilet said.

Neighbours said she was not aware of the required apology and feels such a requirement is unwarranted.

Costa Cardoso said she began 3D to find community and allow women of color to express themselves, but the actions of the Take Back the Night committee has hindered this goal.

Costa Cardoso said 3D’s protest on-stage was not meant to demean the Take Back the Night event and the meaning it holds for survivors. The group traveled to Portland State University to perform at their Take Back the Night. According to Costa Cardoso, the group wanted to be able to represent themselves and not let injustice go unnoticed. She said there are survivors within 3D and she wanted them to be able to perform.

“Not being able to perform at that event is erasing our voices,” Costa Cardoso said.

Costa Cardoso said while 3D waited to accompany one of their members who was speaking to stand on stage in protest, and while they were on stage she could see an officer nearby with a hand on the gun holstered at their hip. The dancers felt they were being watched closely by the officers at the event.

The Department of Public Safety did not respond to a request for comment.

Although the disagreements between 3D and the Take Back the Night committee began due to their routine being called too sexual and inappropriate, Costa Cardoso believes the issues 3D faces with the committee run much deeper. As a group with many identities, she said they face many kinds of discrimination.

Neighbours maintained her position that cutting 3D’s performance was due only to the logistics of getting 3D on stage and the incongruity of their performance with the theme of other performances.

Steve Clark, vice president of University Relations and Marketing, said as he understands it, 3D did not perform at take back the night for two reasons only: for safety and format. Due to the stage being too small, Clark said the dancers would have performed at crowd level which may have led to an unsafe viewing experience. Additionally, the dance performance did not fit the format of the event as it focused on speakers, according to Clark.

Clark said he is unable to comment on the reported employee matters due to university policy, but emphasizes that employees are encourage to give input on their concerns and will not face retaliation for doing so.

“[I]t is the practice of the university to engage progressively with all employees to address concerns and aid an employee’s continued growth and success,” Clark said.