The Daily Barometer • May 28, 2019 • https://dailybaro.orangemedianetwork.com/4571/daily-barometer-news/womens-swimming-cut-adheres-to-title-ix-regulations/ 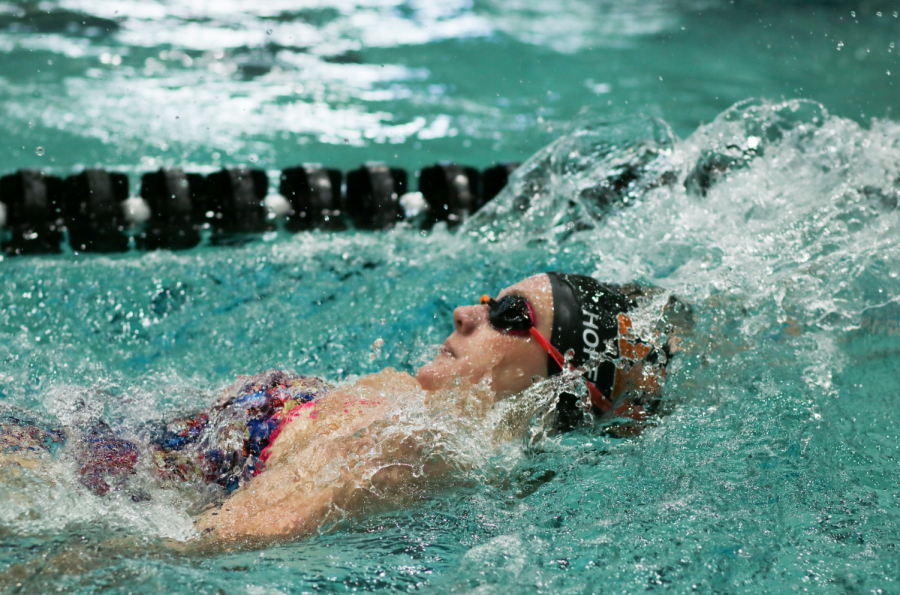 OSU Swimming member Brooke Hofmann swims backstroke during a swim meet. Hofmann holds the ninth best time in OSU history for the 100 meter backstroke with a count of 56.31 seconds.

After the discontinuation of the Oregon State University Swimming team earlier this year, 21 female student-athletes were cut, raising potential questions about OSU’s compliance with Title IX.

Title IX, a federal law first established in 1972, states “no person in the United States shall, on the basis of sex, be excluded from participation in, be denied benefits of, or be subjected to discrimination under any education program or activity receiving federal financial assistance.”

According to the NCAA, Title IX applies to athletics in three ways, including participation, scholarships and other benefits, such as the equal treatment of female and male student-athletes in scheduling and the provision of equipment and supplies.

With the discontinuation of its swim team, OSU now offers 17 varsity NCAA sports, including seven men’s sports and 10 women’s sports. Yet, OSU Athletic Director Scott Barnes said the discontinuation of the swim team did not result in any Title IX compliance issues, and that the university was mindful of Title IX compliance requirements when making the decision to discontinue the program.

“Discontinuing any sport is a very difficult decision, yet we believe this decision was in the best interests of all Oregon State student-athletes as we provide a quality, equitable and competitive NCAA experience,” Barnes said via email.

Marianne Vydra, the deputy athletics director for administration and senior woman administrator, said the loss of the swim team actually brings the university closer to compliance, due to the fact that OSU has more men in the general student population than women. According to Vydra, this ratio is approximately 54% male and 46% female.

Vydra said before the team was cut, the male to female student-athlete ratio was approximately 52% male and 48% female. With the loss of the 21 female swimmers, the ratio is now closer to the general student population at about 53.42% male and 46.57% female.

In order to ensure that the student-athlete population ratio matches the general population going forward, Vydra said the Athletic Department will put roster targets in place for each team.

“We want rosters to flux as naturally as they can, because the coaches need to feel good about who they’re putting on their rosters, with respect to competitiveness,” Vydra said.

Although the loss of the swim team brought the population ratio closer to compliance, Vydra said the scholarship aspect of Title IX is more complicated.

“We have been in compliance on that piece for a long time, and we’re going to manage ourselves into compliance going forward,” Vydra said.

Since the number of student-athletes and scholarships each year are fluid, Vydra said the department is implementing a protocol with checkpoints each term, in order to communicate to coaches and adjust to ensure OSU remains in compliance with Title IX.

“It’s not just athletics managing this piece. We’ve got leadership on campus who are going to check in with us about these evaluations,” Vydra said. “We’re not going to operate in a vacuum, it’s a partnership exercise with campus and this affords integrity in our processes.”