The Daily Barometer • May 6, 2019 • https://dailybaro.orangemedianetwork.com/4606/daily-barometer-news/friday-on-the-steps-osu-a-cappella-sings-for-all/

Friday on the steps: OSU a cappella sings for all 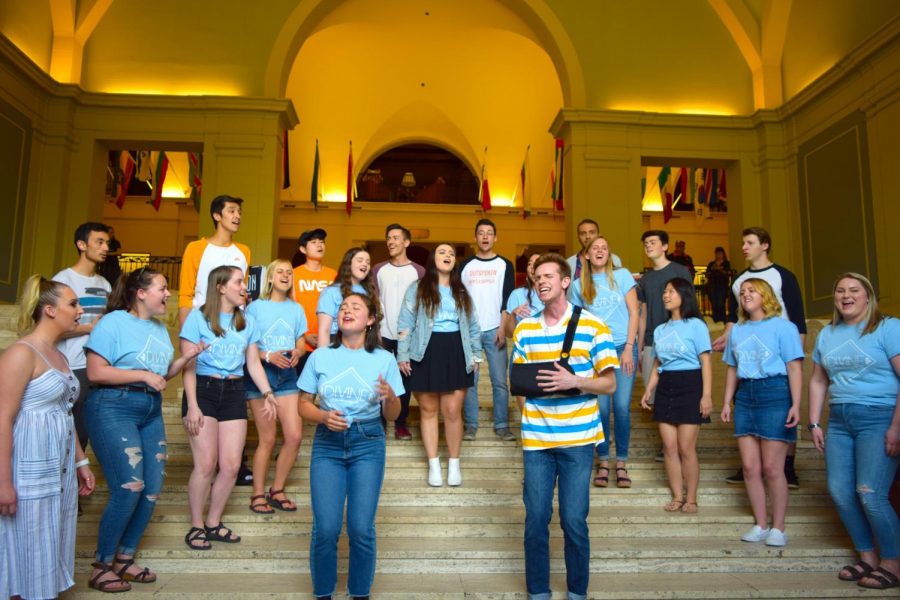 Two of Oregon State University’s a cappella groups put on a show Friday at the Memorial Union, fine-tuning the songs they would eventually perform at concerts taking place during Family Weekend – one of which included the “All-University Sing,” held at Gill Coliseum.

Part of that Friday show included a duet where Divine, the all-female group and Outspoken, the all-male group, sang together for the first time in years.

“Today we had a special performance,” said Andrew Hashberger, president of Outspoken. “Divine and Outspoken did a duet together for the first time probably in many, many years.”

Divine started the performance with two songs, including Ariana Grande’s “God is a Woman” – a performance which would see Ramsey Mcnabb take the spotlight as the soloist.

“I was pretty nervous because there was a lot more people because it’s mom’s weekend,” Mcnabb said. “But I feel I did okay and the group did very well.”

After Divine finished their two songs, the duet ensued – with Hashberger and another member of Divine leading the charge. As the melodies of “No Air” by Jordin Sparks and Chris Brown rang throughout the vaulted ceiling above the Memorial Union steps, there were lots of smiles shared between members of both groups.

“It’s super fun, and I love all the Outspoken boys – they’re amazing,” Mcnabb added. “It was super fun.”

Following the duet, Outspoken sang two songs of their own – one of the songs being “When I Was Your Man” by Bruno Mars.

After the performance drew to a close, the room was filled with cheers and smiles. With so much support coming from the audience, morale was particularly high for one member of Outspoken.

Appearing relieved after his solo in “When I was your man,” which was met with nothing but loud cheers, first year Ryan Manhard said it meant a lot to see the outpouring of support for both him and the rest of Outspoken.

“It means a lot. It’s great to know that there’s this many people who want to come and listen to music,” he noted. “It’s kind of cool to know that [we are] doing something and people want to hear it.”

While it is not guaranteed that a duet will happen every week, the performance on the steps is.

“Every Friday we do perform at the MU steps for free,” Hashberger said. “A free concert that is open to the public at 5 p.m.”

With cheers and smiles about, it appeared as though this week’s student-led performance had been a hit – and the groups’ performances were ready for the big stage during Family Weekend.

OSU’s coed a cappella group, Powerchord, was not present for the event as they were headed to Seattle to workshop some of their songs. However, Hashberger mentioned that they too are generally a part of the weekly Friday performances.