The Daily Barometer • May 6, 2019 • https://dailybaro.orangemedianetwork.com/4609/daily-barometer-news/alpha-omicron-pi-sigma-nu-win-all-university-sing/ 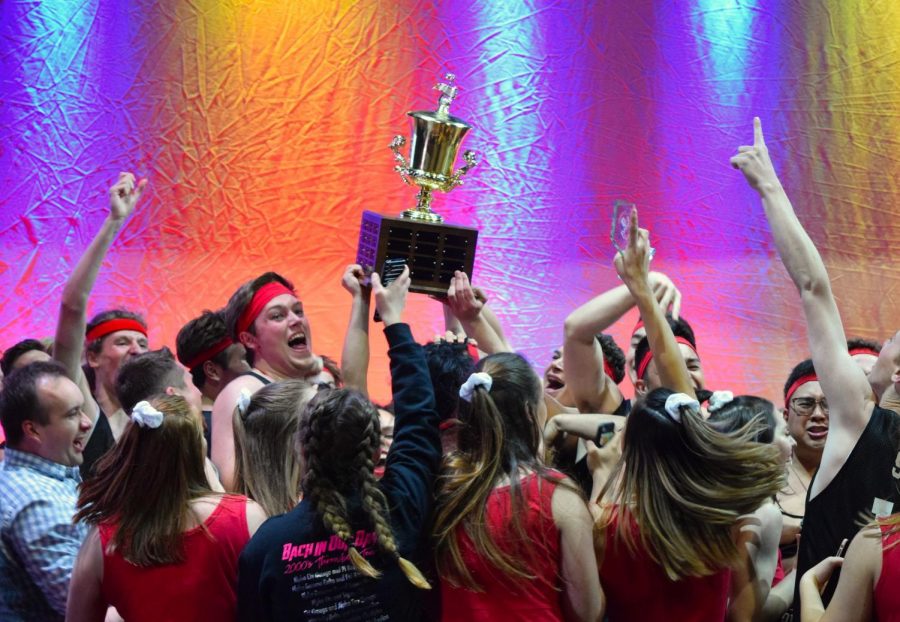 Alpha Omicron Pi and Sigma Nu hoist up their trophy after winning the 2019 All-University SING competition on May 3.

Alpha Omicron Pi and Sigma Nu were the first-place winners of Oregon State University’s 2019 All-University SING event last Friday, the culmination of eight months of practicing and planning with coaches and consultants.

Thirteen pairs of fraternities and sororities worked together to organize this Family Weekend Event. SING is an annual tradition at OSU, where sororities and fraternities pair up to create a dance set to popular songs, which they perform after months of practice. Last Friday’s event was unique, with new technological features and some non-Fraternity and Sorority Life groups performing.

The theme of this year’s SING was “Back in Our Day,” featuring songs from the early 2000s. Kappa Delta and Phi Delta Theta performed “Single Ladies” by Beyoncé, and Alpha Gamma Delta and Pi Kappa Psi performed “Hey Ya!” by Outkast, to name a few songs.

New features included a live feed on the Jumbotron, and videos before each performance. In addition, Divine and Outspoken, two  OSU student-led a cappella groups, performed “No Air” by Jordin Sparks.

“I never knew I enjoyed this type of stuff so much,” said Ashlee Ries, social chair of Kappa Delta, moments before their performance with Phi Delta Theta. “I never tried it before… Right when I started this, I absolutely loved it.”

At the end of the night, the crowd grew silent as the awards ceremony started. After a few awards were given, such as strong leadership awards, the judges began to list the overall winners of the event.

“It’s unreal, I would not think that we would win,” said Caileun Nguyen, member of Alpha Omicron Pi. “It’s so sweet to actually be recognized for everybody’s hard work.”

The night ended with loud cheers. Many were celebrating, regardless of the winners. Parents scattered across the stadium took photos with their children.

Brandon Fitzgerald from Sigma Nu took a break from celebrating to acknowledge the time and effort members put into their performance.

“We all worked really hard together,” Fitzgerald said.

She and Savannah Connell, co-event chair, organize SING, working with all of the Fraternity and Sorority Life houses. After eight months of difficult dancing practices and singing lessons, the organizers said a sense of community was built among the students who participated in SING.

“I think everyone that’s in the Greek community should definitely try out SING because it’s extremely worth it,” Ries said.