The Daily Barometer • May 20, 2019 • https://dailybaro.orangemedianetwork.com/4612/daily-barometer-news/music-program-faces-uncertain-future-band-director-to-leave/ 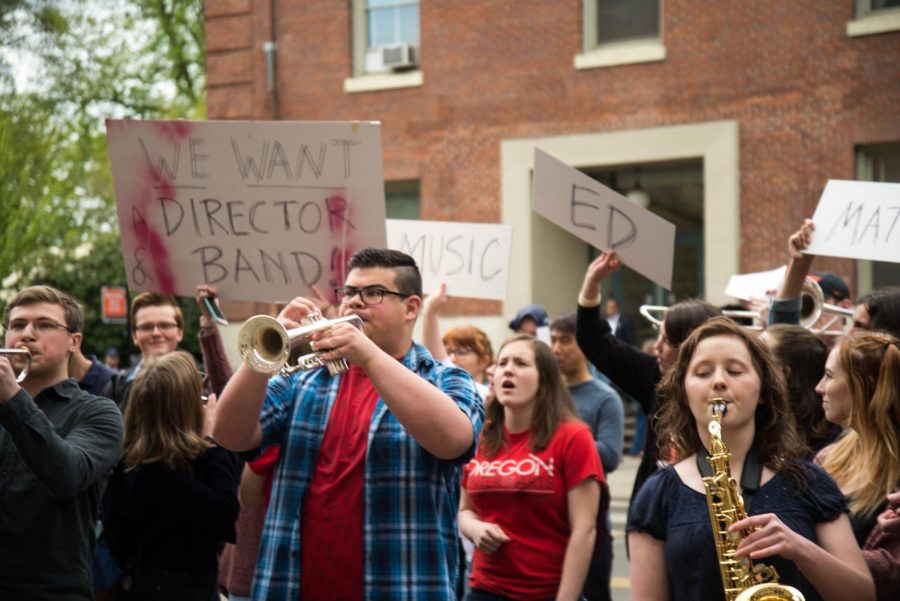 Students are still concerned about the future of the Oregon State music department, despite staging a protest rally on Thursday, May 2 and subsequently attending forum meetings put on by the university to address the problems.

The student-led protest was held in hopes of bringing awareness to some of the issues within the department including a lack of building management, low transparency in financial decision making and the lack of university searches to replace faculty positions within the department. Recently the Director of Bands Chris Chapman announced he will leave OSU, and the absence of a search for his replacement was what ultimately spurred the protest. Though the university has opened a position to replace Chapman, some students feel that the university is dodging their other concerns. According to Steve Clark, vice president of University Relations and Marketing, the number of employed music department staff has remained steady for about five years, with an average of 24 full-time positions. There are also two more available tenure-track faculty positions that did not exist four years ago.

Chapman has purposefully stayed away from the conversations about where the music program will go once he is gone because he does not view it as “his program.”

“I merely rented it from the faculty, students, and administration who helped shape the program for 127 years,” Chapman said via email. “I am honored to have been but a small part of the rich band tradition here. And although I am excited for my next challenge, I will always be an OSU band family member.”

According to Chapman, he is leaving Oregon State because he has been offered a job close to his mom in Ohio. His mom has been alone for 20 years, and he feels he is ready to go home. Chapman will be within driving distance of his mom and will still be working with students in instrumental conducting and wind bands.

Fourth-year Instrumental Music Education major Janie Anderson is concerned about what she feels to be the lack of initiative that has been put into finding a replacement for Chapman.

“Not only does he do work for the more administrative sides of our department, but he teaches a large majority, if not all of the students in the instrumental education department,” Anderson said via email. “We had meetings and open forums, but personally it felt like the forums were just a way for the administration to say they ‘did something to help the department.’ Students even were asking what the point of the protest was if the administration didn’t have any answers for us.”

There is currently a position open for a new Director of Bands at Oregon State, and the position was posted within three months of Chapman deciding he is leaving.

“Across the university, searches to fill open positions take place in a thoughtful and very intentional process that includes evaluation of many issues, such as program priorities, stakeholder input, including from students, budget and other matters,” Clark said via email. “It is extremely rare that a search would begin immediately after a faculty or staff member has announced their decision to leave OSU or is promoted to another position within the university. In this case, starting a search within three months of the opening been announced, is quite fast. In the case of this opening, we fully expect to hire a talented, well-respected and inspiring director of bands.”

According to Anderson, there is more work that needs to be done, and she is still waiting on news of further action from OSU.

The university has opened a position to replace Chapman, but Anderson said other issues are still needing to be addressed. Anderson is most concerned with faculty and staff turnaround rates and the quality of conditions the buildings are held in.

“We have yet to see many important changes that we have asked for. One factor of this is that this is an extremely large university and things are not instantaneous,” Anderson said via email. “However, that does not mean that things can’t be put into the works. The music department student body has yet to hear about any changes to the building/department other than the job posting for the director of bands being opened.”

Students complain the music building is run down, with inadequate practice rooms that are not sound proofed, broken chairs in the recital hall, not enough music stands to go around, and the windows which frequently will not stay open, rendering fire escapes inaccessible, as reported by The Daily Barometer. Students also feel the curriculum is outdated and there is a lack of transparency regarding hiring and firing practices.

“A new music degree program is being developed by college faculty. This degree program is making its way through the music department, college, faculty senate and university development and review process for new degree offerings,” Clark said via email. “This process is consistent with the university’s review of other new OSU degree programs and assures students receive the very best education possible in their chosen major of study.”