The Daily Barometer • May 8, 2019 • https://dailybaro.orangemedianetwork.com/4627/daily-barometer-news/students-discuss-debate-with-preachers-in-front-of-valley-library/

Students discuss, debate with preachers in front of Valley Library 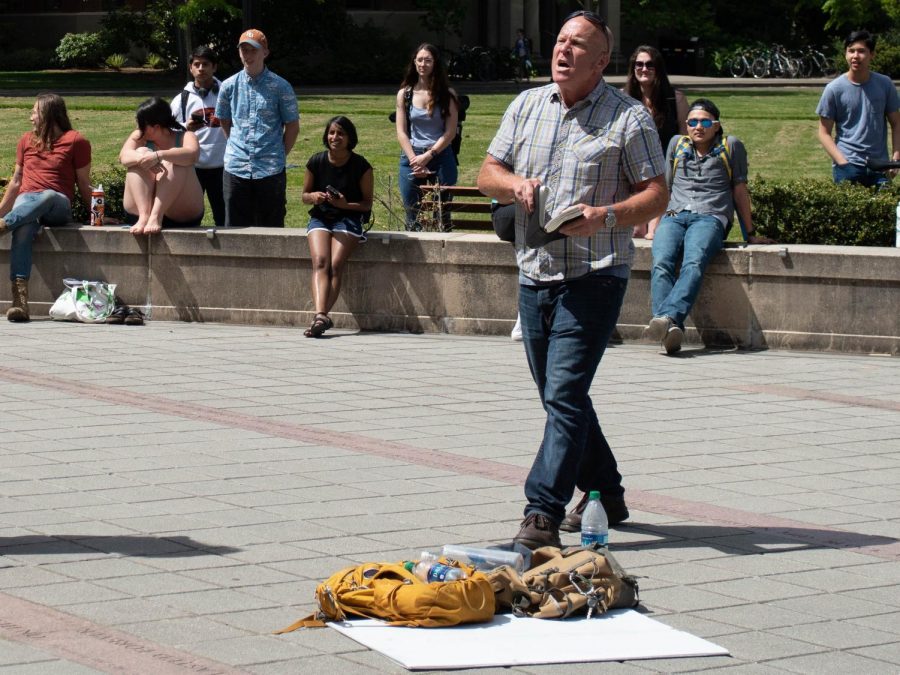 Shawn David, who goes by Shawn the Baptist, preaches in front of The Valley Library as students look on.

Debates and discussions occurred between students and a religious advocate outside of The Valley Library at Oregon State University on the afternoon of May 7.

The event, which started as a man reading the Bible out loud to little response from students passing by, quickly became an active discussion. Shawn David, the primary preacher, is also known as “Shawn the Baptist,” according to his website.

Brooklyn Andrew, a first-year student, participated in a small-group discussion with Keith, David’s partner who was also in front of the library, and who would not provide his last name. Preachers were saying students are slaves to their desires and would not be free until they accepted Christianity. After Andrew left the discussion, the remaining students continued to converse and debate.

“People like that who come out and try to tell other people how to live, and that what they’re doing is wrong, is in my eyes not Christianity. They’re preaching their own thing,” Andrew said.

Steve Boudin, a security officer present at the event, said this isn’t the first time a religious group has come on campus to preach. Boudin said David’s presentation falls under the right to free speech granted under the First Amendment, and therefore is not necessarily prohibited, unless they were to engage in one of the First Amendment’s exceptions, like credible bodily threats, libel or slander.

“(Religious groups) have been coming here almost 13 years,” Boudin said. “As long as they are not disturbing the learning environment they are allowed to be here.”

Keith declined to provide the name of the organization he and Shawn are affiliated with, if any.