The Daily Barometer • May 6, 2019 • https://dailybaro.orangemedianetwork.com/4651/daily-barometer-news/carlson-college-of-veterinary-medicine-hosts-pet-day/ 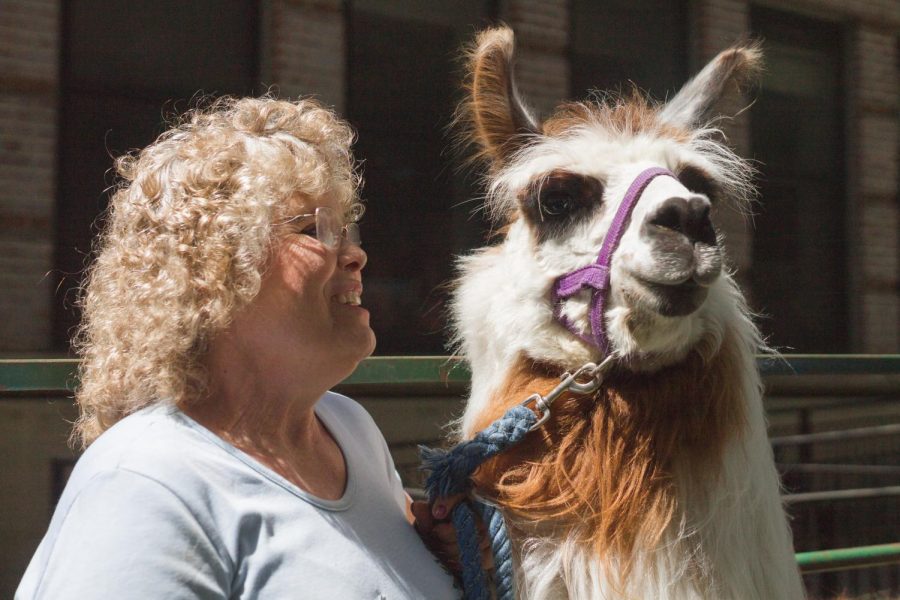 Julie Koenig poses with Outstanding, a two-year old llama, one of the many llamas she brought to Pet Day 2019. According to Koenig, llamas don’t have different breeds, but they are classified by their wool classes. Outstanding’s wool class is medium heavy.

Created, staffed and organized by students, Oregon State University’s Pet Day is Carlson College’s way of interacting with the Corvallis community and continuing a legacy of public service of 32 years.

Pet Day 2019, held last Saturday, May 4, included a petting zoo, dog wash and nail trim booth and dog agility demonstrations. There were also contests to get involved with, including a fun run, pet costume contest and cat photo contest.

“If you brought a costume with your pet, they also could have entered into the costume contest,” said Rachel Clark, a third-year student and volunteer for Heartland Humane Society. “Heartland was able to take second place in the costume contest with the rabbit named Junior, as he was dressed up as a monarch butterfly with wings.”

Pet day, as it was held on May 4 which is frequently turned into the pun, “May the fourth be with you,” hosted a Star Wars-themed 5K fun run/walk event where costumes were encouraged.

This year’s Pet Day guests had the opportunity to meet animals that are not typical pets, thanks to Koenig’s Llamas, Cascade Pack Goats, Child’s Haven Ponies and the Benton County Rabbiteers.

The event usually attracts 3,000 to 4,000 visitors, many of which bring their pets. Alek Husseini and his family were some of those guests who appeared at Pet Day this year. Husseini, a first-year chemical engineering student, had his family visit for spring Family Weekend, and happened to have his dog for the day.

“It was fun being able to see all the other animals. Having happened upon it by accident I was surprised at how big it was,” Husseini said.

According to Husseini, his dog is a part of his family and could not miss the Family Weekend fun, which resulted in Pet Day fun for his pug named Violet.

“Most people treat their animals like family, so having a day to hang out with your pet in a friendly environment was really special,” Husseini said.

There were more than 40 booths at Pet Day this year, each providing information on animal health, adoption, therapy and nutrition.

According to Clark, Heartland Humane Society had a booth set up to show off some adoptable animals and talk about Heartland’s programs.

“This was my first Pet Day, however, it meant a lot still for the benefits it provides and the education everyone receives,” Clark said. “I think it’s a creative way to blend the two. I’m glad I got to partake in the Heartland booth to be able to spread information and work to potentially get some animals adopted. I think it’s a great way to give back to the community by the College of Veterinary Medicine.”

Clark said the benefits of bringing a pet on campus on Pet Day was the socialization they got from the other animals. Also, the booths were selling or giving out gifts and treats to animals they saw.

Pet Day was sponsored by the classes of 2021 and 2022 in the OSU Carlson College of Veterinary Medicine. The day was also supported by Banfield Pet Hospital, Hills Pet Nutrition, Nestle Purina, Royal Canin, Grand Oaks and the Oregon Animal Health Foundation.